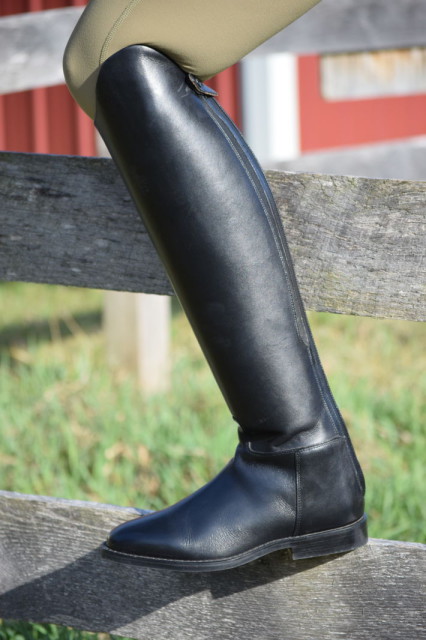 The design makes the Cadence easy on the eyes, but not overtly flashy or ostentatious...just what I would look for in a dressage boot - Photo by Lorraine Peachey

Sometimes, I just feel like certain things are just destined to work out. Or that people are meant for a particular brand of greatness that is quite particular to them. Growing up is certainly an adventure — and there are days when I’m still not entirely sure that I’ve officially reached that milestone in my life. Because I still have plenty of ideas of what I want to accomplish before I truly do “grow up.”

We’re approaching that time of year when I get a little nostalgic — for even though some years have passed since I graduated from college, I still get that feeling around the time when schools close down for summer vacation. And it doesn’t help at all when I’m cruising around in my Jeep with the windows rolled down and some nostalgic tunes come on the radio — something a la Eric Church’s Springsteen.”

It’s funny how much of a hurry I was in to finish school. After all, I wanted to get out into the world as a grown up and make my own decisions. But now, I look back and miss the days that I got to sit in class, hang out with my friends and basically flout all (major) forms of responsibility. 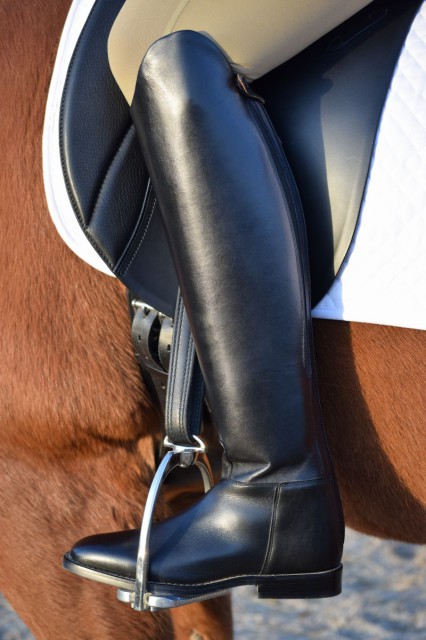 The reinforced calf of the Cadence helps to create a sturdy feel to the outer side of the boot, which is just right for offering support needed in the dressage ring. Photo by Lorraine Peachey.

School days certainly had their embarrassing moments (let me tell you about that time I fell down the bus steps in my brand new corduroy skirt). Or those days that seemed like the end of the world (everybody has a fight with their best friend or gets a bad grade at some point, right?).

But all of the different experiences that I had during school — the friends that I hung out with, the classes I went to, the activities that I took up — were all great at helping me, and everyone else for that matter, find out what we really liked to do — what we were good at and what we weren’t.

Everyone seemed destined to find their own group — the athletes, the artists, the musicians, the writers, the super students, the computer geniuses — because if when you have a certain natural aptitude towards a certain activity and you enjoy it, why not try your hand at it? If you seem meant to do something, why not just go for it! 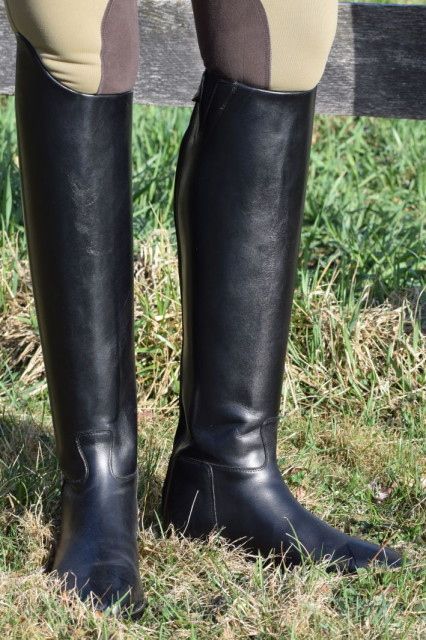 The Cadence boots also feature traditional Ariat performance and comfort, as they boast an ATS footbed and Duratread outsole. Photo by Lorraine Peachey

I just happened to feel at home the first time I walked into a barn. After years of begging for a pony, my parents caved and let me take riding lessons just as I started middle school. None of my school friends were really “into horses,” but that was OK by me. I was totally fine with being “that horse girl” in my grade, no worries.

Growing up, I was always taught the value of hard work — sure, my family was not extremely well off, but I never felt that we wanted for anything. Starting riding lessons was a big deal for me, and so was outfitting me in a pair of breeches and boots for my lessons every other week. Because there was no tree in the backyard on which breeches or boots or even the money to buy them with grew on.

So on that note, my mom took me shopping and bought me my first pair of boots from JCPenney — they were black lace-up boots with a heel. Paddock boots they were not. However, even though they were not designed for the saddle, they had a heel that worked admirably in the irons.

Same with my first pair of “breeches” — which were really a pair of knit stretchy pants. Even wearing my gray stretchy pants with my lace up boots from JCPenney, I managed just fine in the saddle and had SO MUCH fun learning to ride. And, over time, I found riding to be more comfortable when I was able to acquire my first real pair of breeches and paddock boots and half chaps.

Of course, these items outperformed my originals. Because they were designed with a specific audience (the rider, of course) in mind. To really get the job done in the absolute best way that it can be, you have to be able to pick the item that was just made for the job in the first place.

I’ve spent a lot of time riding on the flat and practicing my dressage during my years with Ripley. My first blue ribbon ever was one that we earned together years and years ago at a local dressage schooling show, and we did so with Ripley outfitted in my all-purpose saddle and me in my paddock boots and half chaps. So while we weren’t outfitted to ride a Grand Prix test at the time, we got along just fine at our local schooling show.

Cue the brand spanking new Cadence Dressage Tall Boots from Ariat. While it may seem counterintuitive to the average eventer, I very much enjoy dressage. It gives me the chance to really open up the lines of communication, and I feel like I’m working in complete harmony with my horse. And while sure, any of my riding boots will get the job done, the Cadence Dressage Boots are quite simple fated for the ring.

Yep, I feel pretty confident in that assessment. Because the Cadence boot is unique to itself, and it veers away from some of the features that I’ve come to prize in other Ariat tall boots. Instead of a softer leather or flexible ankle, it acts as a true dressage boot would to provide an elegant appearance, while supporting the leg.

The Cadence dressage boot features a full-grain leather upper with a reinforced outside calf. The reinforced calf helps to create a sturdy feel to the outer side of the boot, which is just right for offering support needed in the dressage ring. The boots also look the part, as they boast details such as a high Spanish cut topline along with a square toe. 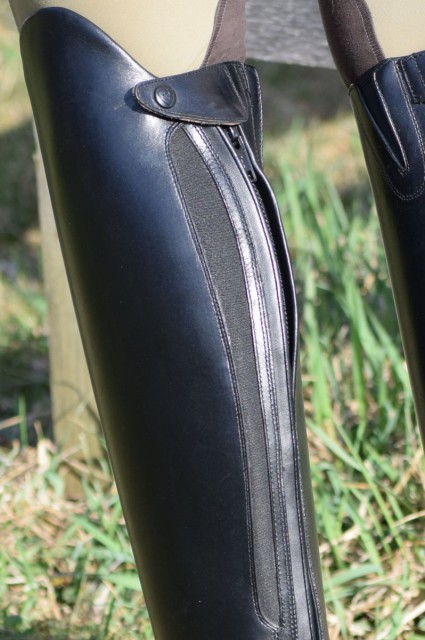 There is also an elastic gore panel that stretches down along the lateral side of the boots, which helps to provide a comfortably snug fit. Photo by Lorraine Peachey.

A full length zipper graces the back of the Cadence boots, which also includes a zipper keeper as well. There is also an elastic gore panel that stretches down along the lateral side of the boots, which helps to provide a comfortably snug fit. The boots are also leather lined on the inside.

And what’s more, the Cadence boots also feature traditional Ariat performance and comfort, as they boast an ATS footbed and Duratread outsole. This means that the Cadence boots have been designed to offer all day comfort and stability, while holding up to life around the barn and in the saddle by offering an outsole with maximum wear resistance.

When I first opened up the box, I felt a little thrill of excitement when I saw the individual boot bags inside. Upon picking one up and pulling the boot out, I’m pretty sure I closed my eyes and smiled while deeply inhaling the rich aroma of leather. Because that just never gets old. Never. Ever. Never-eva.

After sliding the bag off to reveal one of the Cadence boots, I immediately noticed a difference in the leather from what I’ve become accustomed to in a tall boot. I could really feel that the outer side of the calf offered a stiff and sturdy feeling, which I was oh so looking forward to having to provide extra support while riding dressage.

Upon picking the boot up in order to spin it around and get a closer look at it, I felt that it really does give the appearance of tradition, along with a look of elegant simplicity. The design makes the Cadence easy on the eyes, but not overtly flashy or ostentatious — just what I would look for in a dressage boot. 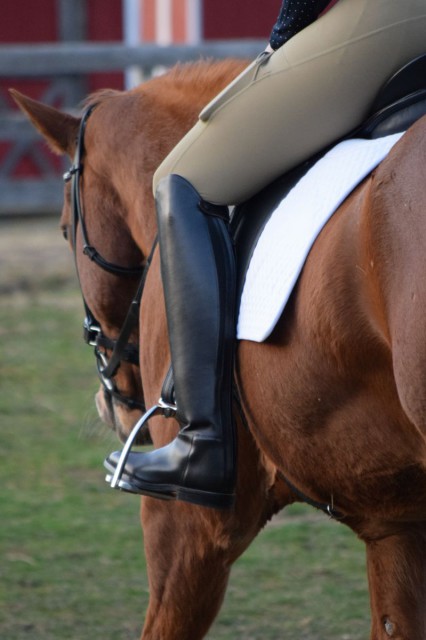 Even though other boots have gotten the job done, I experienced one of those ‘you don’t know what you are missing until you try it’ moments when I spent time riding in the Cadence boots – Photo by Lorraine Peachey

Of course, I put the boot down so that I could run and pull on a pair of breeches, because I just had to try the boots after setting eyes on them for the first time. The zipper felt substantial when I unzipped it, and I carefully slide my foot down in while noticing the stiff feel of the calf and ankle. And then I went to pull the zipper up.

I had a little bit of an “oh crap” moment, when I got the zipper most of the way up and realized that it wouldn’t go any further. I immediately tensed up and had this gnawing feeling in my gut. And the first words out of my mouth may have been, “Oh. My. Gosh. My right calf is too fat to fit!” Cue complete and total despair.

A plan formed in my mind, and I pulled the zipper up as far as I could on both boots, scooped up my tack and made my way down to the barn. I thought that perhaps the boots could just use a little time to break in and stretch out a bit. And after getting my horse in, grooming and tacking up, I stopped to try the zipper again. Guess what? After wearing them around mostly zipped up for those 15 minutes or so, the zipper went smoothly up the rest of the way. 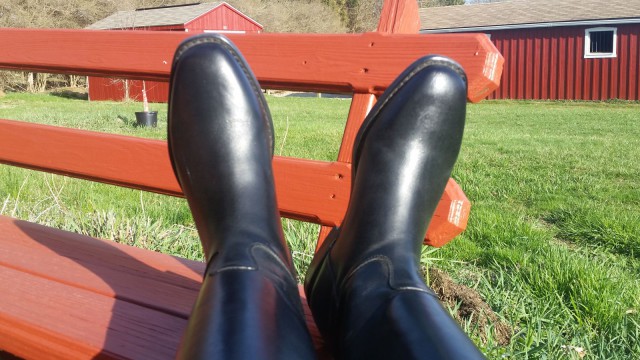 SO glad it wasn’t really me. The Cadence boots really just needed me to walk around in them a bit, and then the zipper just went right up. Boom. After that, I was ready to mount up and get riding. When I put my foot in the irons, and swung the other leg over the saddle, I still noticed the ever present stiff feeling of the boots, which was about to come in very handy.

Even during warm-ups, I noticed in a really obvious way that the stiff leather helped to keep my leg quiet and easier to position. And moving forward throughout the ride, it was even more clear that the Cadence boots gave me that extra support to continue to keep a quiet leg and give subtle cues.

And another point that is also attractive is the price. At $429.95, the Cadence Dressage Zip Boot is an affordable option that has proven it can offer the extra support to really help make a difference in the dressage ring. You can check them out here.

Go Dressage (And I Say That Loud and Proud). Go Ariat. Go Eventing.