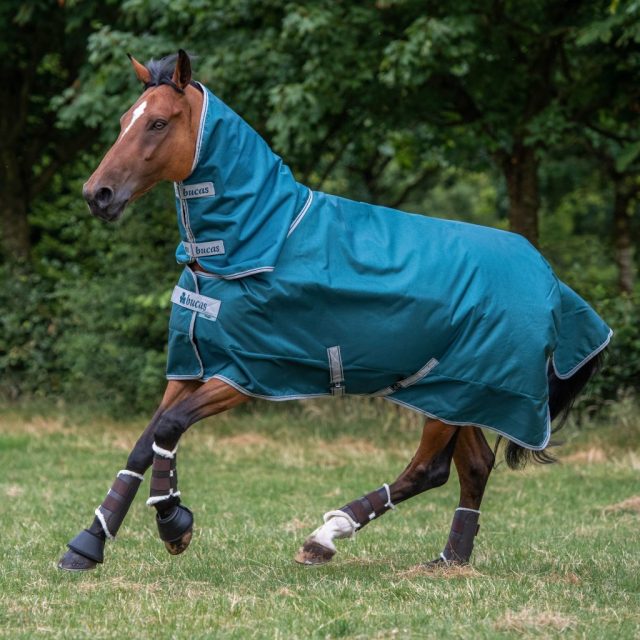 The Atlantic Turnout is the newest rug in the Bucas family. Photo courtesy of Bucas.

After biblical amounts of rain and polar vortexes have plagued the greater eventing nation this winter, it’s likely your blanketing system is limping along right about now. If you’re looking to replace your horse’s turnout rug, take a closer look at the new Bucas Atlantic Turnout, which EN tested this winter in both Pennsylvania and Florida.

The Atlantic range is the newest addition to the Bucas family of turnout rugs, which have introduced numerous technological advancements to the blanketing market since the company launched in Ireland in 1981. Designed to withstand the most severe inclement weather while offering superior fit and durability, Bucas has continued the tradition of of designing “intelligent” horse rugs.

With that in mind, there’s a lot to like about the new Bucas Atlantic Turnout, which is made with tough-as-nails 1000D ballistic nylon. I’m incredibly picky about how rugs fit, and the shoulder darts in Bucas rugs virtually guarantee a fantastic fit that prevents shoulder rubbing and allows for better freedom of movement. 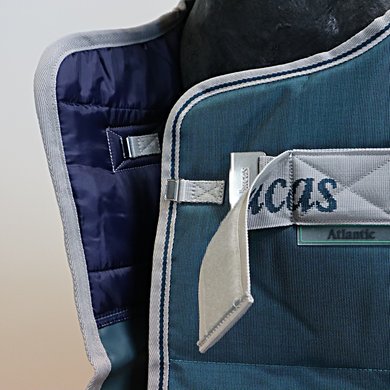 The most exciting feature has to be the the new Dermo-Care lining, which is similar to Stay-Dry lining in other Bucas rugs in that it also wicks moisture away from the horse and can be used in place of a cooler. Whereas the Stay-Dry lining is fleece, the Dermo-Care lining is smooth, which keeps your horse’s coat sleek and shiny and helps combat the dreaded winter scurf. Derry’s coat looks immaculate every time he wears the Bucas Atlantic Turnout, even before he was clipped and was rocking what I affectionally call his “yak” look.

I’m also a big fan of the Click ‘n Go closure on Bucas rugs, which features an easy magnetic snap-lock closure (though it can be tricky to navigate if you are wearing bulky winter gloves). The Bucas Atlantic also features cross surcingles, leg straps and a fillet string to keep it securely on your horse. Derry has rolled around in the Pennsylvania snow and his sandy Florida paddock, and the rug stays put.

You can also attach liners and coolers to the Bucas Atlantic, as well as the Combi Neck. If I’m picky about turnout fit, then I’m even more picky about how neck attachments fit. Derry wears an 81 in the turnout, and the medium neck hits him perfectly with plenty of room so it isn’t strangling him when he puts his neck down, and it perfectly stretches up to sit just behind his ears.

The Bucas Atlantic is available in a beautiful Atlantic Green color with green/silver trim in sizes 60” to 84” and in three different weights: 50g light for $283.95 retail, 200g medium for $305.95 retail and 400g heavyweight for $319.95 retail. Every Bucas Atlantic Turnout comes with a guarantee that the rug will remain waterproof for two years.

Click here to learn more about the Bucas Atlantic Turnout range or to purchase your own rug. Click here to find a distributor in your area via Toklat, the official USA distributor for Bucas.

Have you tried a Bucas turnout rug? Share your experience in the comments below.