In one of the biggest pieces of eventing news so far this year, it was revealed earlier this week that Chipmunk FRH, the prodigal talent at the forefront of Julia Krajewski‘s string, had been sold to fellow German team member Michael Jung. Like many high-profile horse transfers, this inspired a variety of visceral emotions — how exciting to see what the Maestro might do with some an impressive horse; how desperately sad to see Julia, herself an excellent competitor and the producer of the horse, lose one of her best friends.

But this is one of the tricky parts of the sport. It’s an unrealistic idealisation to imagine a world in which eventers might one day own their own horses; it’s not a sport with high profit margins, as we all know, and the support of owners is crucial to a team’s success. Unfortunately, the downside is that sometimes, for a number of reasons, owners may find themselves unable to continue in their role, and much-loved horses must change hands. 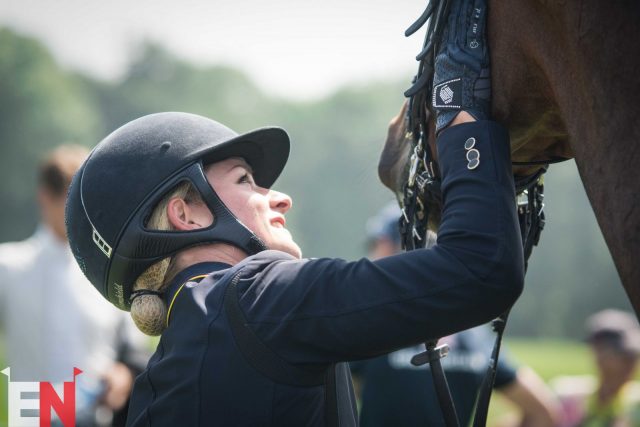 Find yourself someone who looks at you the way Julia Krajewski looks at Chipmunk FRH. Photo by Tilly Berendt.

Instead of cursing the system, I’m taking a few minutes today to look at the positives instead — and those positives aren’t hard to find in the case of Julia and Chipmunk. It’s hard to pinpoint the highest points of their impressive career together, but I’ve settled on two: THAT dressage test at the World Equestrian Games, which earned them a jaw-dropping score of 19.9, and their brilliant cross country round at Aachen, which Julia names as her standout competition.

The take-away? You’re allowed to be sad for Julia, while also feeling a twinge of excitement over what might happen when the world’s most decorated event rider takes the reins on his first-ever made horse. But we mustn’t, down the line, forget the years of hard work, partnership, and sheer love for the horse that went into creating the formidable athlete that the ineffably goofy Chipmunk most certainly is. The credit — and a share of the glory — will always go to Julia.