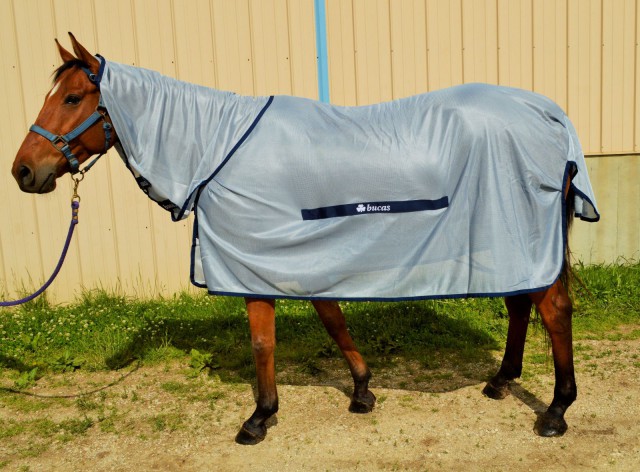 I went to the barn the other day in shorts (and muck boots — blasted mud!) and came home feeling all crawly from the number of flies that are already out this year. It’s been so wet here in Kansas City that I can only imagine how many creepy crawly creatures are having a free for all reproducing, and they’re definitely out in full force on the hot, muggy days in between thunderstorms.

The pasture my horse lives in is kind of neat because it’s on top of a hill, which makes for a nice breeze to keep the air moving on the stuffy days. It also helps a bit when it comes to keeping the bugs away. Unfortunately, flies are some of the most resilient creatures I’ve ever encountered, so my poor guy still finds himself all twitchy from the flies.

I’ve been exploring fly sheet options, and the last thing I wanted to end up with was something that felt like it was made from old lawn chair material. You know, the stiff, unforgiving nearly plastic feeling “mesh” that wards off flies and also prevents any sort of movement, nevermind comfort.

Having enjoyed my experience with Jesse’s light turnout blanket, which is a Bucas Power Turnout, I was eager to give the Bucas Buzz Off sheet a try as well. Obviously, my first criteria was the material, which did not disappoint me. The mesh is very lightweight and flexible, which means it can move when Jesse moves without rubbing.

I went ahead and tried the full neck option for Jesse — call me overprotective, #sorrynotsorry — and was pleased to see that he looked well covered once I got it on, but also not like he was going to sweat to death underneath all of that covering. 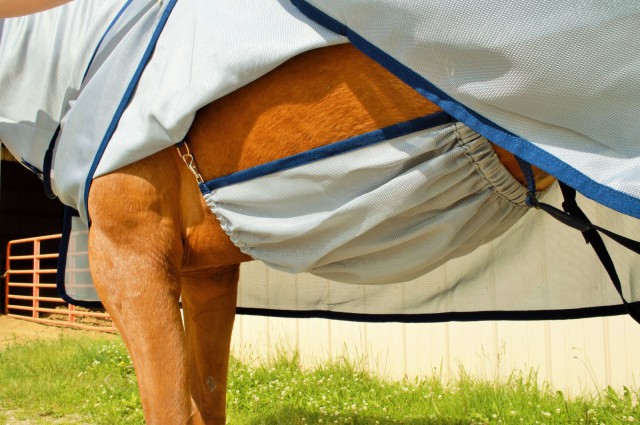 The belly band feature of the Buzz Off Fly Sheet. Photo by Sally Spickard.

Once again, the attention to detail on Bucas’ part is fantastic. From the front closure, which emphasizes comfort and protection, to the well thought-out belly band which offers another layer of protection from the biters, it’s clear that the horse was in the designers’ minds as they created the fly sheet.

The belly band is really neat, and it’s flexible which will allow Jesse to roll or go through any of his other daily antics without worry of dislodging the blanket. But, if you aren’t a fan of the belly band it’s fully detachable, although the belly band does help stabilize the sheet, so it’s a nice way to ensure it doesn’t get loose during turnout.

Although there are no shoulder darts on the Buzz Off sheet, I was pleased to see that Jesse was still able to move around with it on. He has gained a bit of weight from the spring grass, so even though he typically wears a 75″, I found this sheet to be just a bit snug. However, his Power Turnout is also a 75″ and I tried that on to be sure that it was just him gaining a bit of weight, and I can report that the sheet does still fit true to size. Suffice it to say, now that he’s going into full summer work the sheet should fit perfectly soon enough.

The Bucas Buzz Off Fly Sheet is available in a full neck and also a classic sheet. There is also a matching fly mask available if you want to get the full outfit going on. Why not, right? I sure would want everything possible to ward off the flies this summer. It’s going to be an interesting one!

You can find more on the Buzz Off line (and purchase your own!) here. We’re also giving one of these great sheets away in this week’s Fab Freebie, so be sure to enter here before midnight on Friday, June 5. Good luck!