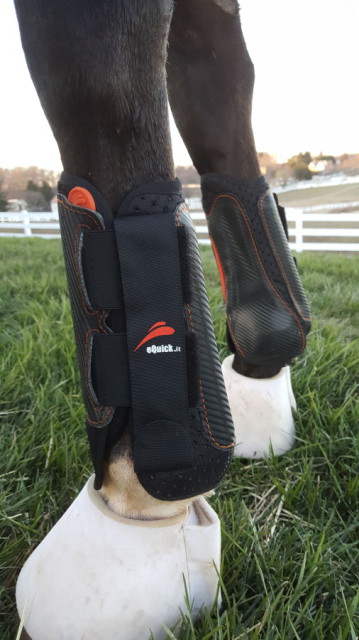 My safety is paramount and that goes with out saying. I wear a helmet and body protector and try to be as educated as possible about what I am going to be doing. The one thing that comes before my safety is that of my horse.

Our horses play an equal, if not the more important, part in this amazing sport of ours. I will stop at nothing to make sure my partner is as protected as I am when we head out on course. That being said, I am always on the look out for something better, something safer, something that I feel holds my horses’ safety as highly as I do.

Since the moment I saw the eQuick eVenting Cross Country Boots, I have been obsessed with them. When I say obsessed, I’m being honest. These boots stand far apart from any other cross country boot I have seen and it’s not just because they are black and orange. Let’s get down to what makes them so special. 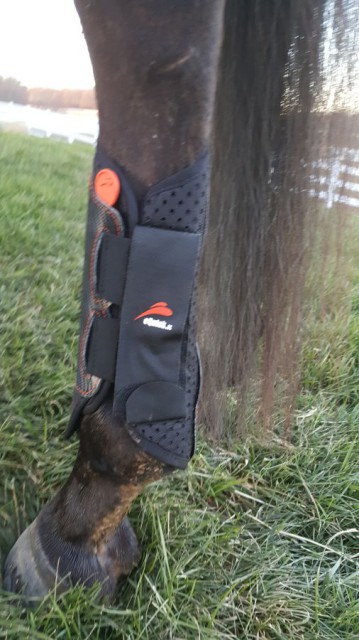 The eQuick eVenting Cross Country Boots are made from a composite carbon fiber and Kevlar material. Photo by Dave Taylor

The first thing I noticed about these boots when they arrived is their weight. When I picked them up, my hands nearly hit my face with the thought that these would be much heavier. The boots weigh in at an astonishing 5.8 ounces making them one of the lightest cross country boots on the market.

After getting over their lack of weight, I began to wonder if the lack of weight would take away from their ability to protect my horses legs. Then I looked closer at what these boots were made of. A composite carbon fiber and Kevlar (the same material used in bullet proof vests) encase the leg for maximum protection but also are designed for flexibility.

I decided to take these for a test run on my mare while cross country schooling and learned another valuable lesson about their composition. After schooling the water, I headed for the trailer to un-tack and head home. I went to take off the eVenting Cross Country Boots and realized they were the same weight as when I started.

That is because eQuick has designed these boots to be non-water absorbing. So by the time I removed them 10 minutes after schooling the water, the boots were completely dry inside and out. Speaking of removing these boots, that is where they stand apart from any other boots hands down.

Now imagine you walk into the vet box, your horse is still jazzed from coming off of cross country and prancing around. Time is of the essence to strip that horse down of all its tack. Removing the eQuick eVenting Cross Country Boots is insanely fast with the “Quick Release” technology. One must simply pull the patented “Quick Release” tab and boom … the boot comes off.

One other thing I noticed it that my horses’ legs are cooler after working out wearing these boots. This is because eQuick has incorporated a perforated high impact HCL foam that aids in protection but offers breath ability at the same time which helps to keep the leg cool when the competition heats up.

So I’m fairly certain my enthusiasm over these boots has been adequately conveyed at this point. But when I find something I fall in love with that has my horses safety at the top of their priority list, I’m all in and I must spread the word.

The eQuick eVenting Cross Country Boots are made entirely in Italy and are sold in pairs. They come front or hind in small, medium, and large. They retail for $179.00 a set and you can check them out here.