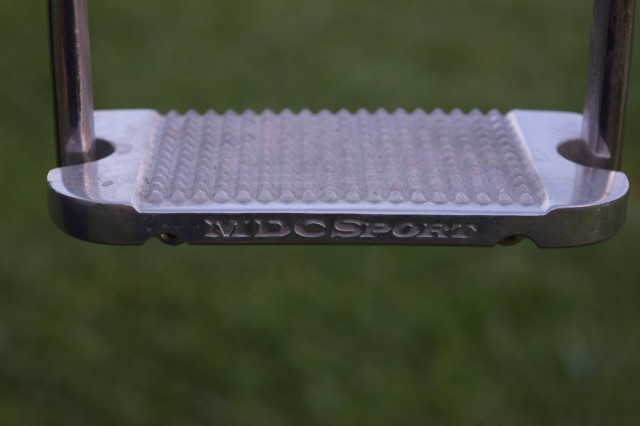 I’m someone who prides myself on being an original – my preferences on movies, music, food & fashion can sometimes be a lot varied, and slightly eclectic. What can I say though, other then I like finding awesomeness in places that are often overlooked or underappreciated. Maybe I like the feeling of being unique. Or just finding things that could be considered the ‘best kept secrets’ of…well, fill in the blank here.

So maybe that’s one of the reasons why I like being able to try so many unique products. I never get tired of trying out something that breaks from the norm, and finding out that the concept just works so entirely well for me personally. And when I find a super cool product that works for me personally, I literally CAN’T wait to share the experience with anyone (and everyone) who is interested in hearing about it.

But I’m also a traditionalist. In some ways, I feel like a stereotype – if you asked me what some of my favorite things of here and now are, I would have to answer honestly. My brain flashes through a series of images, including (but not limited to) a Starbucks Vanilla Bean Frappuccino, pumpkin  anything, cozy sweaters, super cute boots, and riding in the fall foliage. You know, typical fall horse girl stuff.

Tradition can be a good thing though – in fashion and in riding. I never tire of are classic tweeds, plaids, and houndstooth patterns. Some things just never go out of style. Though they can be improved upon. 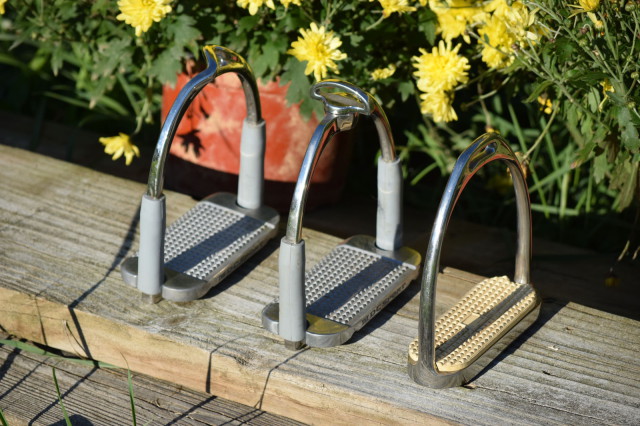 Check out the difference between the profiles: (from left to right) the MDC ‘S’ Flex, the MDC Patented Adjustable Top Super Sport, and a my (old) traditional pair of irons – Photo by Lorraine Peachey

Recently, I wrote about my experience trying out MDC Intelligent Stirrup Irons. And I’ll let you in on a little secret – since I switched over to riding in MDC Irons, I have not ridden in any other kind. Though I have been experimenting a little by switching back and forth between MDC’s Adjustable Patented Top irons, and their brand new ‘S’ Model irons as well.

So what exactly is the difference between the MDC Patented Adjustable Top irons and the ‘S’ Model irons? The answer is pretty simple – if you read about my experience trying the MDC Patented Adjustable Top irons, you might recall that they are the very first kind of irons that allow the rider to select the angle at which they want to ride. Riders can choose from 3 pre-set options of 0 degrees (acting as a traditional stirrup), 45 degrees, or 90 degrees.

The ‘S’ Model on the other hand require no adjustment – because the design of the top keeps them set at a 45 degree angle at all times. With this particular model of stirrup, there is a designated left and right iron. The great thing though is that along with the ‘S’ Model irons, an easy-to-follow instruction sheet arrived as well. Which allowed me to easily switch the irons in to use with my saddle. 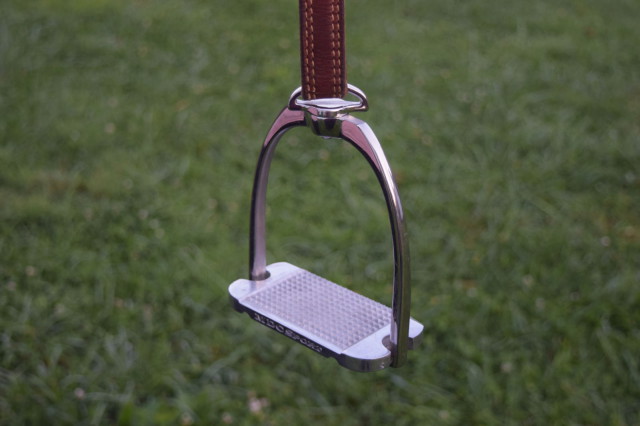 But what really makes the ‘S’ Model different? Well, I’ll tell you – while the rider is able to benefit from the 45 degree angle of the ‘S’ Model irons, they also can still keep the appearance of a using a traditional iron. No joke. If you take a look down at a pair of ‘S’ Model irons, you will see that they look like an ‘S’ shape (or a backwards ‘S’ shape, depending on whether you are looking at the left or right iron).

I tried out two different pairs of MDC ‘S’ Model irons – one was the ‘S’ Classic (with a narrow tread), and the ‘S’ Flex (with a wide tread). And I began first with the ‘S’ Classic irons, which I used with my dressage saddle. Again, by following the instructions that came with the irons, they were easy to thread on the leathers properly.

As I had with the Adjustable Patented Top irons, I also found that after mounting up to ride with the ‘S’ Model irons, that it was easier to pick up my offside iron before starting forward. Though it was nice not having to pause a few moments to set my irons before riding, since the ‘S’ Model irons are already preset at a 45 degree angle.

While schooling dressage, I found that I continued to like the aluminum tread versus a more traditional rubber tread. Also, with the ‘S’ Classic irons, I did find that I preferred the narrow tread at first – reason being is that I felt as though it was easier for me to keep my heels down and legs in position with the narrow tread. 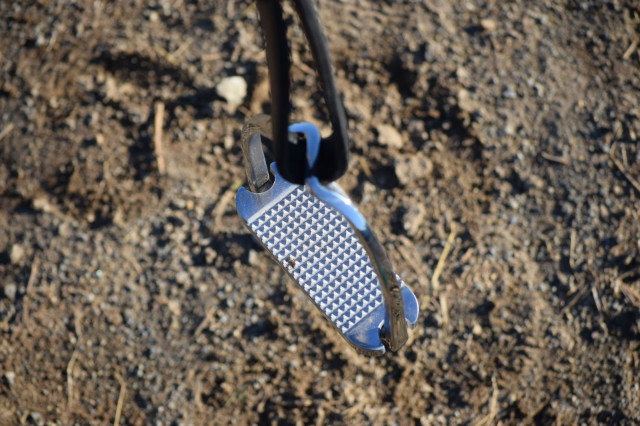 With the ‘S’ Model irons, I continued to feel many of the same benefits that I observed with the Adjustable Patented Top irons – such as me noticing the relief of the pressure on my leg, when I compare to the way that regular old irons felt. And the crazy thing is, before trying MDC irons–I had absolutely no idea that my stirrup leathers were creating tension across my shins…until it wasn’t there anymore!

One of the other benefits that I noticed with the ‘S’ Model irons is the ability to more easily pick up a dropped stirrup. As I did with the Patented Adjustable Top irons, I also intentionally dropped my stirrups while riding, so that I could attempt to pick them back up again. What I’ve found is that the ‘S’ Model irons allow me to more easily get my toe back into place, versus traditional irons. Instead of having to ‘flip’ the irons outwards with my toe in order to pick it back up (as I would have to do with a traditional pair of stirrups), I simply just have to find the opening that is already there.

And while the ‘S’ Classic irons with the narrow tread don’t include the 45 degree landing ramp on the back side – the ‘S’ Flex irons with the wide tread DO! After a chat with Martin Cohen, the founder and brains behind MDC Intelligent Stirrups Irons, I found myself pondering. Martin posed a question to me–do I prefer riding with the narrow or wide treads for dressage, and why? My immediate reply was narrow treads, because it was easier to keep my heels down. 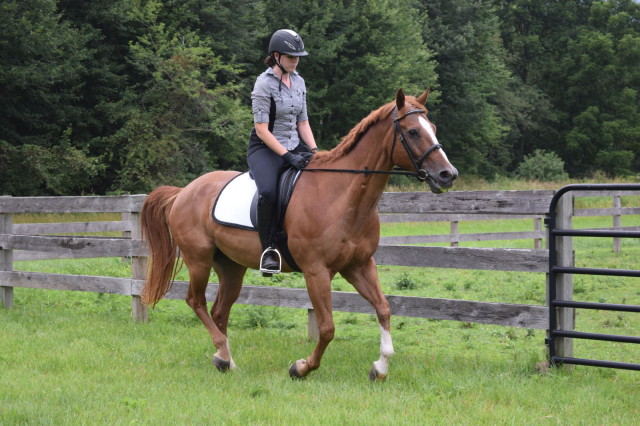 While I am able to benefit from the 45 degree angle of the ‘S’ Model irons, I also get to keep the appearance of a using a traditional pair of irons – Photo by Lorraine Peachey

So the moral of this story? I find that MDC Intelligent Stirrup Irons work for me. Period. I enjoy the fact that the offset angle relieves the pressure that I used to feel on my shins. And that I feel like that they are safer, because I think that my own foot is less likely to get caught if I fall. I also like the security and stability that I have with a wider tread, especially because of the 45 degree ‘landing ramp’. And the tread itself is something that I much prefer to a regular rubber pad.

And the nice thing is, there are a number of different style options to pick from. With the Patented Adjustable Top irons, riders have the freedom to choose their angle of offset – yet with the ‘S’ Model irons, riders can feel the benefit of a 45 degree offset and keep the look of a traditional pair of irons. And in other news – the MDC ‘S’ irons will also be available soon in an ‘S’ Pony Classic model!