About four months ago, I embarked on that exhausting journey to re-evaluate my competition horses’ supplement regimes. My prelim horse, Prophet, was the one that always defied my best efforts to find palatable and effective supplements to encourage weight gain and healthy maintenance. Hard Keeper doesn’t even begin to describe the animal I have in my care!

I had been considering putting Prophet on a legal calming agent for some time because I reasoned that much of his weight issues were related to stress and irritability. Of the available choices, I decided to go with Quiessence because of it’s multitude of related benefits for a horse like mine. Below is the review I’ve been sitting on for a while in order to get an accurate level of feedback for the product. This is neither an endorsement for Quiessence, nor is my opinion of the supplement representative of Eventing Nation’s stance on the product.

If you’re considering Quiessence (or some other comparable supplement) for your own horse, I hope this review can give you a little insight into the probable benefits and side effects of using such a product!

Quiessence is primarily a magnesium supplement that claims to serve multiple purposes. Most prominently, it is meant for nervous and overly tense horses who have difficulty relaxing. The Quiessence labels states “because Magnesium is important to nerve and muscle function, Quiessence may help horses that are tense, spooky and inattentive to attain a more balanced mental state.” Quiessence is also primarily fed to horses who suffer from being chronically overweight, with cresty necks and a tendency toward laminitis (or founder). Magnesium is also considered a factor in stabilizing horses at a healthy weight. The third function Quiessence claims to serve is to provide relief to horses with tight, sore muscles.

Quiessence comes in a pelleted form and can be purchased in 5lb pails, 14lb pails, and a 50lb bag. Dosage levels range from 2 to 4 ounces per day, with a maximum dose of 2 ounces per 250lbs of horse. It is considered competition legal in the USEA and USEF, even at the FEI level.

The itemized breakdown of vitamins in Quiessence (per ounce) are as follows:

The levels of Magnesium in this metabolic supplement is significantly higher than most of its competition, though the gap narrows marginally when compared to calming supplements instead. It’s probably a good thing that its the leading provider of magnesium, considering the brand hangs its hat on the vitamin as the source to so many solutions. But you’ll notice that the supplement doesn’t include any Tryptophane or Taurine, which many of the other supplements offer. Whether this makes a difference or not is hard to determine, but it’s something to be aware of if these are specific vitamins you are seeking in your supplemental feeding.

Other than the significant amount of magnesium, Quiessence also offers Niacin (also known as Vitamin B3), Riboflavin (Vitamin B2), and Biotin (Vitamin B7), and Thiamin (Vitaming B1). These are all necessary daily nutrients for maintaining healthy bodyweight. Elements like these are a good indicator that the supplement is meant to alleviate instances of mild vitamin deficiency in horses that may not be subject to an ideal diet. This couold include horses on little to no grass, horses with high protein diets, and horses that receive only certain types of hay.

Obviously, this is the question everyone wants to know the answer to, yet is nearly impossible to answer. I managed to contact two different horse owners that validated Quiessence’s claims to stabilizing overweight and founder-prone horses. The Magnesium appears to function as the company suggests, lessening crestiness due to weight gain in mature/adult horses. I cannot verify the safety or effectiveness of using this supplement on young horses or excessively elderly horses, though I would advise caution. This supplement appears to have no effect on cushings and pre-cushings horses. The jury is still out on assisting underweight horses in gaining additional pounds.

when used as a calming supplement, I can provide a bit more personal insight. I recently began using Quiessence on my 14 year old Off-Track Thoroughbred, Prophet. I event him at the Preliminary level, so the horse is very fit and very active, with a naturally high strung attitude.  Prophet is perpetually underweight due to his nervous nature and his disinclination for eating grain. He also is prone to moving with a tight back and hollow frame, particularly when feeling stressed by his surrounding.

Basically, Prophet is the perfect candidate for this supplement!

I put Prophet on Quiessence on October 3rd, 2011, and in a very short amount of time I saw a noticeable difference in his behavior. Within four days of application, Prophet became almost lethargic in-hand. He became less distracted while hitched to a post or in cross-ties, less prone to setting back at sudden stimuli. In fact, the horse even started dozing when I tacked him up!

Now, perhaps that is not an unusual occurance for other peoples’ horses, but I have owned Prophet for eight years now, and never once has this horse fallen asleep when I’m tacking him up! He’s extremely sensitive and touchy, and typically the whole saddling process is as bit of a tight rope walk. But now that he is on Quiessence, he hardly seems to notice that I’m tightening his girth or adjusting his pad. The whole experience was frankly alarming the first time I witnessed it! (which is why I took a picture!)

Over the course of the first month on Quiessence, Prophet also seemed more relaxed in his movement when we were working on Dressage. Whether this is related to the supplement “muscle relaxing” qualities or not, I cannot be sure. For Prophet, so much of his physical tension was related to his nervousness, that the two symptoms were often interchangeable. With Quiessence in his diet, he seemed just as willing to work, but also more capable of focusing through distractions.

I know these benefits sound like a double-edged blade, and I agree. While it is wonderful to think my horse has finally “relaxed” out of his high-strung instincts, that doesn’t mean I want to change who he is or turn him into a dead-head horse. Prophet is a wonderful mount, a strong and active-minded competitor, and literally my best buddy. I would never want him to be less than exactly who he is. So I did initially worry that perhaps Quiessence was altering his personality too much. I hypothesized that his body was still acclimating to the substance, and that he would become more alert again as his internal nutritional levels balance out. Or perhaps not. Only time would tell. What I could say with certainty was that I’ve worked him in dressage and over fences consistently since putting him on this supplement, and while he was certainly a bit lazier in dressage (not exactly his favorite discipline to begin with), he’s pretty much the same old Prophet when it comes to jumping. And that’s just as I hoped it would be!

I’ve been sitting on this review for a little while because I felt it would be unfair to draw conclusions on Quiessence’s ability to produce the desired results just based on a single month’s research. So, here we are, four months later. It’s now February and Prophet has been given 2 scoops of Quiessence daily since October. How have things changed?

My earlier predictions about acclimating to the supplement proved correct. After about a month of sheer laziness, Prophet began to develop his old habits of being a lookie-loo in new places. In December, he set back against my trailer at a local horse show and took a scenic tour around the showgrounds at a sprightly canter. Prophet is definitely still Prophet, no more concerns about him becoming a “dead head.”

However, that’s not to say he isn’t improved to how he used to be. Temporary moments of insanity aside, Prophet does seem to have mellowed a bit, and more importantly his behavior under saddle reflects that he’s more capable of focusing when it’s time to actually work. I continue to struggle with moments in which new stimuli just “blows his mind,” but as long as I have his attention (which is easier to do these days), I have a solid horse.

And that’s not even the most significant influence that Quiessence has had on my horse. I’d say, hands down, that this supplement has managed to increase Prophet’s willingness to eat. Now, please take into account that I have used and tested a wide variety of weight gain supplements in my time owning this horse. Most of them Prophet won’t even try to eat (which is so catch-22, it’s infuriating!). But he liked Quiessence since the beginning, in its palatable pellet form. And I literally have no other explanation for why he now cleans out his feed bucket. He’ll even eat at shows (not alot, granted, but more than he used to)!

One final note about tense muscles and tight backs. Prophet will always be predisposed to hollow, especially in dressage. But the fluidity of his movement through his back has actually improved a great deal in the last two months. Again, it’s really hard to say whether this is directly related to the Quiessence supplement, but I know that being able to relax and focus is more than half of that battle. Even when I pulled his shoes for off-season, he has maintained a reaching trot that lifts through his back and stretches his entire frame. Such a result is both unexpected and unprecedented, and I can’t help but look towards this show season with high hopes for Prophet’s scores. Quiessence may not be the miracle cure I had hoped it would be, but there are definite benefits to it’s use!

So, with that said….

Where Can I Buy Quiessence?

The easiest and most inexpensive place to obtain Quiessence is on SmartPak. They offer it as one of their pre-packaged daily feeding options, as well as sell it in 14lb pails and 50lb bags. The pricing is as follows: 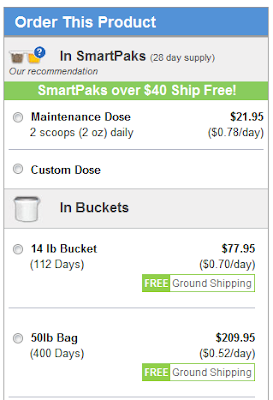 Quiessence can also be purchase directly from the retailer, Foxden Equine. Foxden is willing to provide free samples of their products, and also sells Quiessence in a 5lb bag, for those who don’t want to risk purchasing a month’s supply of a supplement their horse wont eat or doesn’t benefit from. The pricing for Quiessence through Foxden is as follows: 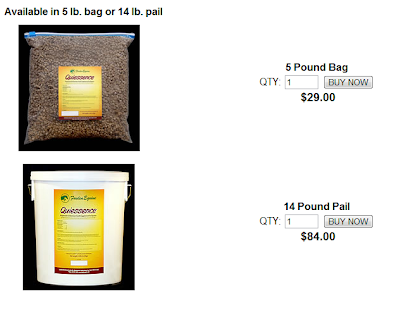 Quiessence can also be purchased from a number of other retailers in a similar competing price range. If you’re lucky, you might even locate it in your local feed store and save yourself the shipping costs!