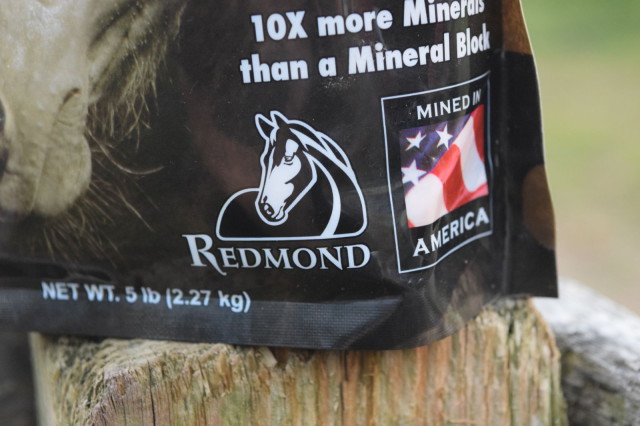 During the hot days of Summer, I find it easier to stay hydrated. Particularly on those days when it feels like I am sweating buckets just from walking out the back door and down to the barn – that’s never a good way to start out the day. I just make sure to grab a bottle of water (or two) before heading out the door. And it’s definitely not hard to remember to keep hydrated when it’s so warm that I down half a bottle of water at a time.

When the warm temperatures start to slip away, only to be replaced by the cooler days of Fall, it’s a little more difficult to remember to take a water bottle along. And when freezing cold days arrive (that I’m not even trying to think about right now), I basically have to force myself to keep hydrating while I’m getting my barn work done and riding. At those temperatures, I’m trying to toss away the ice water and pick up a peppermint hot chocolate!

Water is something that is so essential to a properly functioning human body…but also for an equine body as well. Something that you may not know is that a mature horse’s body is comprised of about 65% water. And in order to stay hydrated, an average horse should drink about 5 to 10 gallons of water each day. 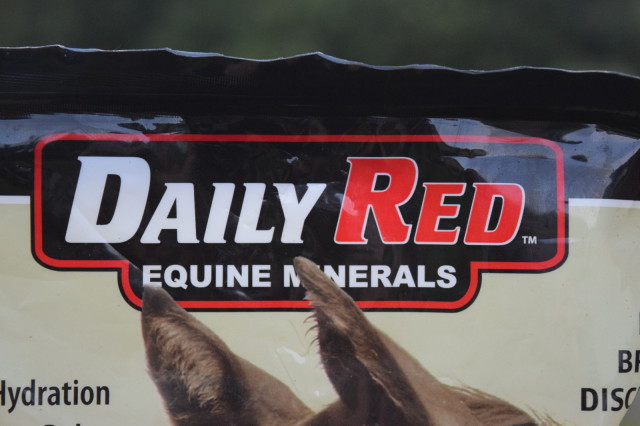 Now, I know that how much water my own horses drink on any given day can vary based on the outside temperature and their activity level, among other things. One practice that I find that I’ve held to is providing salt and/or mineral blocks for my horses–both free range in their pasture, and hanging in their stalls.

Something new that I’ve tried this year is providing Redmond Rocks to my horses. I’m glad to provide them with a traditional Redmond Rock in their pasture, and also with a Redmond Rock-on-a-Rope in each of their stalls. I find that two out of the three of my geldings really seem to enjoy licking (and licking. And licking.) the rocks.

I feel as though I see a correlation between how much my horses lick their mineral rocks and how much they drink–the more they lick, the more they seem to drink. Which is what I want to see. 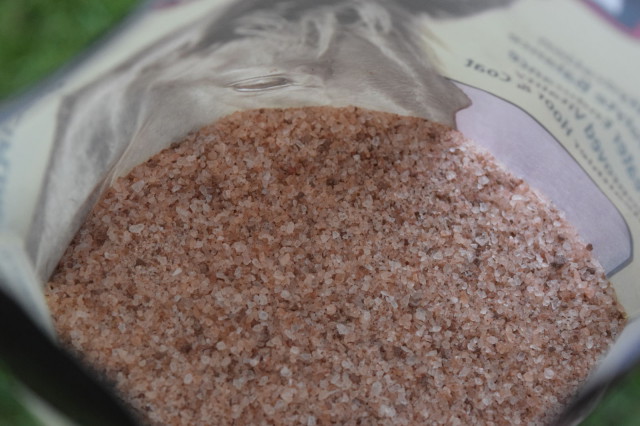 Daily Red is a granulated form of Redmond Rock, and it contains 60+ trace minerals – Photo by Lorraine Peachey

Unfortunately Mark, my extra large giant of a horse, has never shown much interest in licking any kind of salt block, mineral block or mineral rock. He has been a rather finicky eater since…well, always. When Mark was a foal, he would quite literally take up to an entire hour to eat his grain ration–he would just get distracted and wander around.

So it never surprised me when I found that he stuck his nose up at a traditional white salt block. Or a red mineral block. Or that he didn’t show all that much more interest in a Redmond Rock. I’m not sure if he just has a sensitive tongue, or simply doesn’t like licking a block or rock.  Which is why I was really happy to have the chance to try out Redmond Rock’s Daily Red!

When I first heard about Daily Red, I was interested to learn that it is really just a Redmond Rock that is in a granular form. Needless to say (but I’m going to say it anyway), I was pretty excited to find out about Daily Red because it provides me with a way to get Mark to consume the minerals provided by his Rock, without actually having to lick it. Since he never really shows much interest in licking a rock or block, that is. 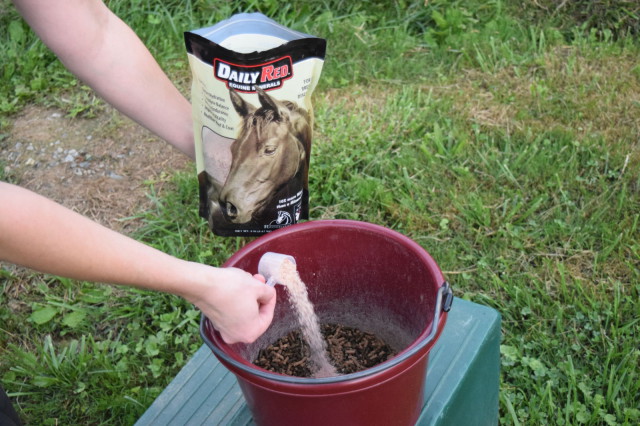 I just use the scoop that is included to measure out Mark’s daily ration, and then add it into his grain bucket – Photo by Lorraine Peachey

I’ve been using Daily Red as a part of Mark’s daily supplement regiment for over 6 months now. When I first took a look at the package of Daily Red, I was happy to see that the 5lb pouch was re-sealable. And Daily Red really does look like the granulated form of a Redmond Rock that it is– so it gives your horse all of the same 60+ trace minerals that they would get from a traditional Rock.

I’ve found that it’s very simple to just open the pouch of Daily Red each day when I’m getting Mark’s grain ready. I just use the scoop that is included to measure out Mark’s daily ration, and then add it into his grain bucket. And then, it’s super easy to just ‘zip’ the pouch closed afterwards.

Even though Mark is a finicky eater, he does not hesitate to dive right into his grain when the Daily Red is added into his ration. I add Daily Red once a day, into his evening ration of grain. And I have to say, I noticed a difference in Mark’s drinking habits right away after starting him on Daily Red.

My turnout routine is typically that I leave my horses turned out all day, and then bring them into their stalls overnight. So stall-time is when I can really monitor the individual eating and drinking habits of each of my horses. And after starting Mark on Daily Red, I definitely noticed him drinking more water than previously. 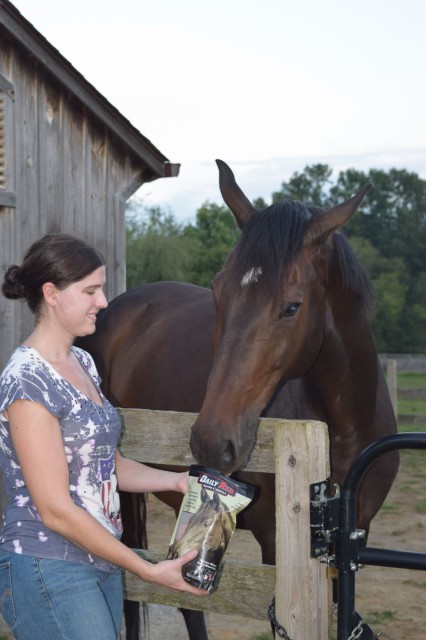 The other great thing about a pouch of Daily Red…it seems to last me for a pretty long time! If you give your horse the recommended dosage of 2oz per day, a bag of Daily Red will last you 80 days (for one horse).

And something else that is pretty cool–Daily Red starts by being mined right here in the USA. It a combination of all natural minerals that are mined from a sea bed deposit that is located in Central Utah.

So I feel like I can rest assured that Mark is getting the minerals and electrolytes that he needs, even though he is not a fan of licking a block or rock. And not only is the Daily Red convenient to use (and Mark eats it along with his grain ration)–but it is also affordable. A 5lb pouch of Daily Red has a retail price of $16.24, and it is also available in a 25lb container for $41.18!