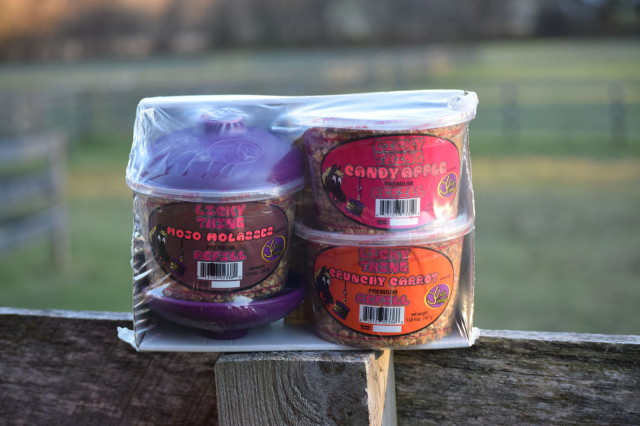 I personally gravitates towards the Licky Things value pack, which included a holder, and three refills (the Mojo Molasses, Candy Apple and Crunchy Carrot). It was a great way to start out with a holder, and it gave me the chance to try out a variety of flavors so that I could see if my horses had a favorite - Photo by Lorraine Peachey

We’ve only had one snow so far this season in my neck of the woods – but please don’t think I’m complaining, because I certainly wouldn’t dream of it. I actually do love to get at least one big storm each winter though.

There is something about a world blanketed in white. Everything just looks pristine – after the snow stops, and before anyone wanders out, the untouched landscape is so beautiful that it’s breathtaking.

After those especially big storms–you know, the ones where the roads drifts shut–I can start to get a little stir crazy. Especially after I go a day (or three) without being able to leave the farm.

It takes a lot of snow to keep me and my truck home, though it does occasionally happen. When it does, it is always a good thing to have some awesome snackage and DVDs on hand to keep me amused. Give me a mug of hot chocolate and some Gilmore Girls re-runs, please.

Of course, during the bad weather of winter, my horses end up being stuck in their stalls for more hours then other times of the year. When their winter paddock is a sheet of ice or a sloppy mud pit…they stay in their stalls. Period. Call me over protective, but I go by the ‘rather safe than sorry’ mantra. Especially with two youngsters who tend to run and play. A lot.

But when the horses are stuck in the barn for several days, they tend to go a little stir crazy. Understandable, since I’m the same way. Side effects in this case can include (but are not limited to): chewing on the stall fronts, pawing…loudly, and poo-ing in water buckets (intentionally). Yeah. 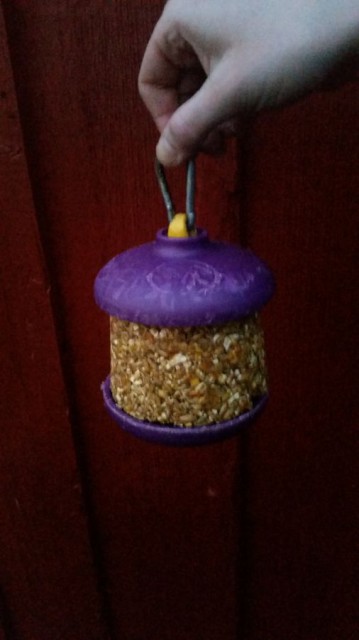 Suffice to say that I have to get a little creative to try to keep wandering minds engaged whenever we reach several days of being barn bound. Because once stall fever emerges, there’s basically naught to do. This season, I’ve started to keep Licky Things from Uncle Jimmy’s in each of my horses’ stalls to keep them entertained.

I started out by trying out a Licky Thing for Rufus–the mouthy boy of the group. Because he basically puts his mouth. On anything. Really anything he can reach. And it went over quite well–so well in fact, that I actually purchased two additional Licky Things for Ripley and Mark as well.

If you’ve never seen them the easiest way to describe Licky Things is that they are a round, lick-able treat for your horse that contains essential vitamins and minerals. Each of the round shaped refills can be mounted in the Licky Thing holder, in order for your horse to enjoy it. The holder is made of a solid feeling, purple colored plastic.

The refill was very simple to mount into the Licky Thing holder – I simply took the lid off of the refill pack to start. Then, I took the bottom of the holder, and stuck the center piece through the hole in the bottom.

Finally, put the top piece of the Licky Thing holder on, and finish things off by adding on the top clip. 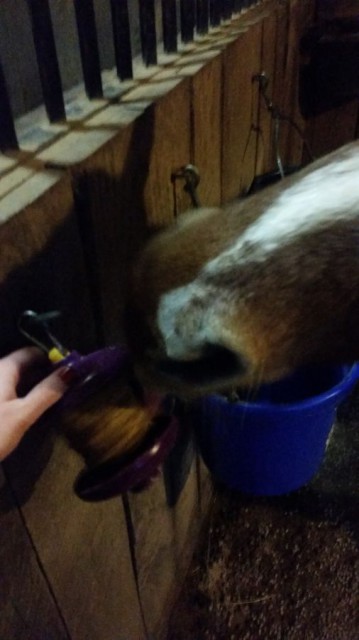 The top clip made the Licky Thing simple to place in each stall – I was able to clip it on the third eye hook that I have bolted into my stall walls (for when I want to hang a third bucket during the hot summer months). The clip snapped right on, and it allowed the Licky Thing to hang at a good level for the horses to lick.

Once I installed Roo’s Licky Thing in his stall, it was actually pretty comical to see how quickly he became rather obsessed with it. Really. I hung it up while he was turned out.

So on that first day, he made a beeline to it when I brought him in the barn for the night. And he started licking. And licking. And for good measure, he licked some more.

After I dumped Roo’s grain for him to eat, he moved away from the Licky Thing and started to eat his grain. Usually, once Roo’s nose goes into the grain bin, it does not come out until the bin is totally empty. Until he met the Licky Thing. I laughed out loud when Roo left his grain to return to his Licky Thing for some more licking.

Ripley and Mark were likewise very receptive to their Licky Things – Ripley likes his quite a bit, and I found it on the stall floor the morning after I first gave it to him. I think he was a little over eager with the licking.

Once I put it back up on the wall, it seemed like he went through a short learning curve of how to achieve the optimal angle for licking. 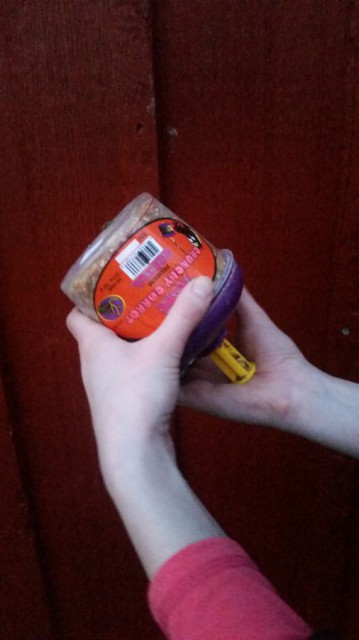 The refill was very simple to mount into the Licky Thing holder – but it is very important to leave the refill inside it’s container, as it makes the installation go much easier – Photo by Lorraine Peachey

Mark was the biggest surprise of all though – he has never been one for salt blocks or rocks. And doesn’t seem to like any kind of lick-able treat. But surprisingly, Mark took to it like a fish to water. And he seemed to be pretty enthusiastic about his Licky Thing – I was surprised, but very happy to see him enjoying his treat.

Licky Thing refills are available in various flavors, including Candy Apple, Mojo Molasses, Crunchy Carrot, Cool Mint, and Banana Blast – each of these flavors contains essential vitamins and minerals for your horse, and have no sugar added. There are also Sugar Free refills available on Uncle Jimmy’s online store as well, for horses with special dietary needs.

I personally gravitates towards purchasing the Licky Things value pack, which included a holder, and three refills (the Mojo Molasses, Candy Apple and Crunchy Carrot). It was a great way to start out with a holder, and it gave me the chance to try out a variety of flavors so that I could see if my horses had a favorite.

While I hung the Licky Thing against the stall wall for my geldings, it is recommended that for each refill to last longer, that the holder be suspended. When the Licky Thing holder is suspended, it is harder for horses to be able to get their teeth on to bit the Licky Thing. And since it’s main purpose is boredom busting, it helps to keep horses entertained for longer that way.