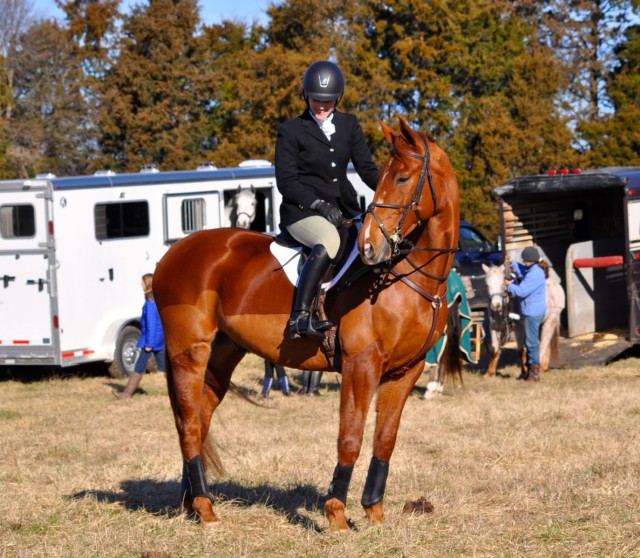 In England, it’s de rigueur for eventing horses of all levels to spend their winter season in the foxhunting field, but in the U.S., not so much. In this country, the hunt field is not necessarily where young eventing enthusiasts start their passion for galloping at hedges and coops, or where young horses find their balance and footing across varied terrain.

We reap the benefits when we import sensible Irish horses that have already been out for two seasons at the age of 5, but it is certainly less common than it used to be to find crossover between the two disciplines.

Leo, I decided, was going to take the old fashioned route to finding his cross country talents; we were going to foxhunt. He has come an incredibly long way in the 18 months that I’ve owned him, in both cross country acumen and fitness for the activities required in eventing, but there is still something missing.

A horse that doesn’t go outside of an arena for the first six years of his life is just a little behind in terms of fitness and balance, in my opinion. It’s the base layer that sustains you, and that’s established early in their life.

It’s silly, really; we eventers have very similar goals to foxhunters, but we have a bit of snobbery going on, as both sides think that the other is mostly insane. We are each seeking a horse that has a good balance, comfortable gaits, fitness that lasts, an efficient gallop, good aids for woah and go, sure footing no matter what the terrain, and smarts over solid fences set in different situations.

Yes, the average foxhunter doesn’t care if their horse goes on the bit. Yes, they occasionally trot or canter on gravel or even paved roads. Yes, they probably run through mud that you wouldn’t dream of putting your fancy import into. However, it is one of the few sports where you will find the same passion and camaraderie as you do in eventing.

Foxhunters are die hard, and they don’t shy away from rain/sleet/snow/freezing conditions. Their social circle is defined by their club, and they always have a good luncheon afterwards that is provided by the members. If there is a flask going around, you are always offered some. Sharing is important. While chitchat is not encouraged during the hunt, it always happens in hushed tones, as everyone wants to be friendly. 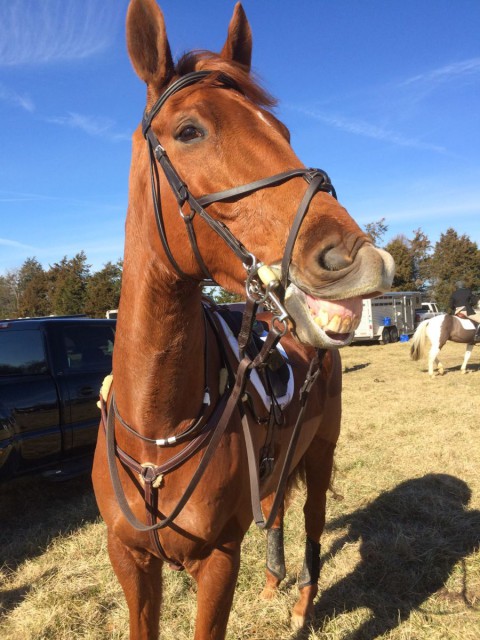 This is not to say that all eventing horses should go foxhunting. I attempted to take Nyls on a summer walk and talk two years ago, and it was an abysmal experience. For FOUR HOURS STRAIGHT, he ran sideways, he ran backwards (into a creek a few times), he reared, he frothed from every pore in his body, he champed at the bit, he jigged, he kicked out. It was a nightmare, and I quickly established a “no group trail rides” rule for him.

Leo is a much more laid-back dude, and as he didn’t really do much in his first six years of life, he has no expectations for competition or group activities, and I figured that my chances on him involved a greater survival rate. I selected a hunt on territory that I usually use for hacking, just in case I had to run home in an emergency of badly behaved horse.

I was not to worry though, because Leo took to hunting like a fish to water! He said yes to group trail rides! Yes to galloping in a cluster down a hill, yes to standing stock still and listening to hounds, and yes to trotting for long periods of time on small trails.

He didn’t mind people running up his butt, onto his butt or in fact accidentally playing bumper cars with the horse in front of him. He had no inclination to run faster, beat anybody or really pull at all. When the staff came flying by him at a full gallop on a 5-foot wide path, he didn’t move at all, but mildly watched as they blew by.

As a gigantosaurus (official title) and also a full warmblood, Leo struggles with the fitness aspect. I’ve never had a full warmblood before (Nyls is about 65%), and I didn’t anticipate the big difference in how much work it takes to get them strong for cross country.

Since this foxhunting thing seems to work out, I’m hoping to use the rest of the season to get Leo out and galloping more and using his brain to find his feet, wherever they may be. As a bonus, after the chaos of a hunt field, I don’t think he’ll ever be worried about a crowded warm-up arena ever again!