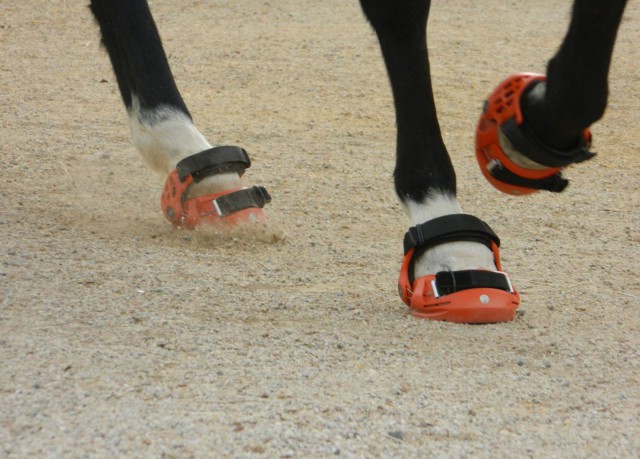 Barefoot event horses may soon be able to don protective hoofwear in the dressage ring thanks to a rule change proposal submitted to the USEF by David Wilson, owner of Flying High Stables, that could serve as a benefit to unshod horses when the footing is less than ideal.

There are no restrictions on the use of hoof boots during the jumping phases of eventing, but when David realized that Renegades, Easy Boots or other protective hoofwear were prohibited in dressage under the current USEF Rules for Eventing, he decided to do something about it.

“The Rulebook is so silent on footwear, but I don’t think they intended it to be illegal,” David said. “The way it reads, it says no boots at all, even though they are talking about splint boots. I added the language that specifically addresses footwear.”

David has proposed EV115 (Saddlery) section 2E: “Any type of horse footwear (hoofwear) is permitted, provided all components of the hoofwear are either permanently attached to the hoof or are integral to a covering of the bottom of the hoof and the holding of that covering in place.”

This may be good news for competitors faced with riding dressage on hard ground or slippery grass where extra protection or traction is needed. David feels that in such cases, a distinct advantage goes to shod horses.

David owns a thin-soled Thoroughbred named Rubber Bucky, or “Ducky,” who happily trains in all three phases of eventing while wearing Renegade Hoof Boots to protect his sensitive feet.

“I was substantially motivated by Ducky’s situation and my desire to compete him more vigorously,” David said. And for anyone concerned about how your horse might perform wearing protective footwear, he has this to say: “I’ve done many hundreds of miles of hunter paces with (Renegades) on and had no problems.”

David’s proposal will be reviewed and go on to the Board of Directors for consideration at the USEF Annual Meeting in January 2016. USEF members may log on to their account on the USEF website and comment about the rule change on the rule changes page.