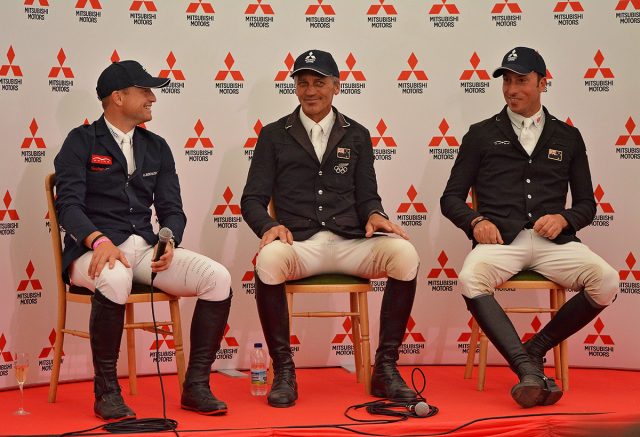 What did Andrew Nicholson, Michael Jung and Tim Price have to say after finishing one-two-three at the 2017 Mitsubishi Motors Badminton Horse Trials? Read on!

On whether he ever thought he’d win Badminton: “Of course I thought I’d have this day, I just didn’t know when it was going to come! I come here every year thinking I’ve got a chance. 25 years ago I came here thinking I had a chance and I absolutely had no chance of even getting round, but you’ve got to talk yourself up when you’re young, don’t you?!”

What it means to win Badminton after all this time: “The feeling is very different to when I’ve won Burghley — it’s unbelievable in itself and then to win it three times in a row with Avebury, it’s a very different feeling there. I think to have to wait so long for it, and a few times to be so near and not make it and slip back down again, it’s pretty hard and you’ve just got to get over it and move on and keep coming back. I’ve been lucky to be in that position to have that dream and have it put into place, and now it’s worked, it’s an unbelievable feeling.”

On Nereo: “I’ve had Nereo since he was 4 years old, he’s always been one of my favourites. He’s not a horse that wants to cuddle and pat him all the time. He very much knows that I hop on and ride him, and that’s what we do. He doesn’t want me to catch him in the field, he doesn’t want me to make a fuss of him, he knows that Johanna does all that with him and I drive him. He’s had to work very, very hard.

“It hasn’t been natural for him for dressage. Galloping cross country — he’s a lovely galloper but he’s got a big stride so with this undulating ground it’s hard work for him and yet he happily does it all, he tries to please, he gives you 100% every single time. I can bring him out year after year after year.

“When I was recovering from my neck injury, Nereo and Avebury were the two main reasons that I had a go at riding again. It’s important to have something to motivate you and it was those two. Once I started doing a bit of jumping I contacted Steven Smith who helps me in the show jumping now and he came down, and between him and Wiggy, and the children and the owners, we’re a great team and to have Nereo in that team is unbelievable.”

What does it mean for Nereo’s owner: Libby Sellar: “That was a bit of all right Andrew, thank you very much indeed!”

On Sam’s prodigious talent and longevity: “Sam is really a brilliant horse, he’s very strong and healthy and absolutely nice to ride. Sure, I’m a bit unhappy about the mistake but it was for sure my mistake. In the end I think we had a really great week, I’m very happy about everything, how it works, how he feels in the cross country that was really unbelievable, how strong he is with 17 years, that was really nice riding him yesterday, and also today he jumped very well in the warm-up arena and in the end I’m very happy about this week here at Badminton.

On planning to continue to compete Sam: At the moment, yes, I think so, he’s very happy, and he likes really the cross country and I think he’s happy to do a bit more.

About Xavier Faer: “I’ve had him for Trisha Rickards who’s his owner for about the last two and a half years. She bred him, so that’s one hell of a feat before everything else — she bred him and managed him right through since the word go.

“We brought him through the Advanced level and he’s been a bit spooky and he’s been a bit quirky all the way through; he hasn’t been one of these horses with wins all the way but I’ve always thought of him as a horse for something like Badminton. He came here and was quite unestablished in the dressage but he’s a fantastic jumper and galloper and that’s what was on display yesterday and today.”

Tim’s expectations for the weekend: “The majority of the time I’ve had him his quirks have got in the way of any kind of an attempt at a performance, but this year he’s come out three times in preparation for this and he’s actually been very good. I would have been disappointed if he hadn’t come and continued in the same vein so I was expecting him to go well across the competition but it’s always unexpected to be sitting here at the end of it.”

What Jonelle said afterwards: “She said, ‘Well done!’ Actually yesterday she hadn’t said anything until someone congratulated me for being one second inside the time, and she said, ‘I thought you were one second OVER? Oh! Well done!’”

On starting 2017 with a great result: “I’m very relieved. Last year I felt like there were quite a few instances where it could have gone either way, I was unlucky and a bit of this and bit of that, but this is a great start. I feel like there’s been a bit of a load that’s been lifted and it’s nice and early in the year so hopefully I’ll be able to continue and take that confidence through and enjoy what’s to come.”