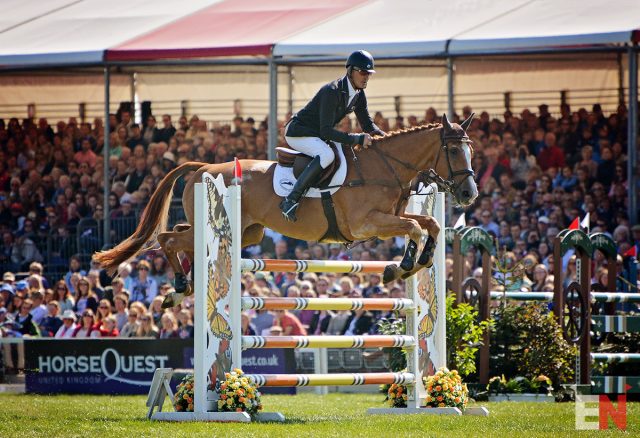 Considering Andrew Nicholson had won eight four-stars before today, you’d think one of those victories would have come at Badminton. But in completing Badminton 35 times in previous years, Andrew had never held the Mitsubishi Motors Trophy on Sunday — until today.

He jumped Qwanza earlier in the order of go to secure his 36th completion at the world’s biggest four-star, then entered the ring with Nereo in third place hunting for his 37th completion.

It didn’t matter that Andrew was competing in his first Badminton since 2015 after fracturing his neck in an accident that threatened to end his career. It also didn’t matter that Nereo hadn’t jumped clear in show jumping at four-star level since 2014. 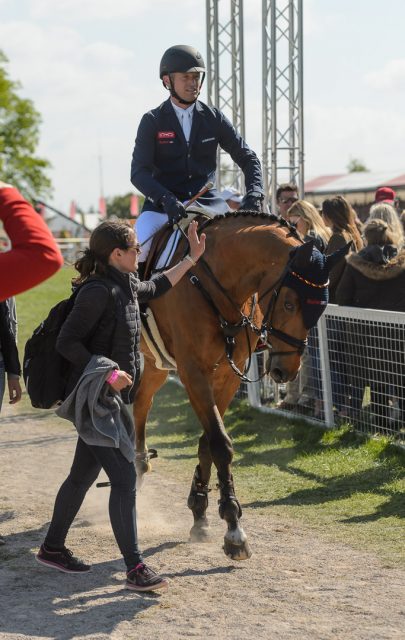 Pats for Sam after his round with Michael Jung. Photo by Nico Morgan.

Andrew and Nereo left all the poles in the cups, adding just one time penalty to their score, to catapult past defending winners Michael Jung and La Biosthetique Sam FBW and Ingrid Klimke, who was bidding to become the first woman to win Badminton in a decade aboard Horseware Hale Bob.

Andrew and Nereo clinched the win on 41.4. Michael and Sam finished second on 44.0 with one rail down, and Tim Price and Xavier Faer jumped clear with one time penalty to finish third on 49.2.

New Zealand ultimately dominated the top 10 final results. In addition to Andrew taking the win and Tim finishing third, Mark Todd finished both of his rides in the top 10 thanks to jumping clear and inside the time — something just 26% of the field managed — to place fourth with NZB Campino on 50.4 and sixth with Leonidas II in sixth on 58.1. 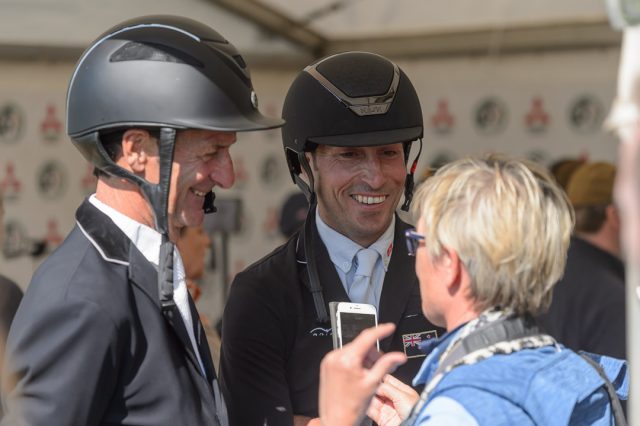 Tim Price and Mark Todd all smiles after their top results. Photo by Nico Morgan.

Yoshiaki Oiwa secured the best ever finish for a Japanese rider at Badminton, finishing eighth on 62.2 with one rail down aboard The Duke of Cavan.

Ingrid Klimke and Horseware Hale Bob, who led after cross country, did not have the conclusion they’d hoped for at Badminton, adding rails and a refusal plus time penalties to finish ninth on 62.2.

Tina Cook and Billy The Red shook off the tension after being held in the final horse inspection this morning to jump a beautiful clear round inside the time, rounding out the top 10 on a final score of 63.4.

Looking to our American combinations, Lauren Kieffer and Team Rebecca’s Veronica added one rail and one time penalty to finish 17th on 73.2 in their Badminton debut. Click here to read all about Lauren’s Badminton experience and learn about her exciting plans for the summer.

We still have much more to bring you from Badminton, including quotes from the final press conference. Stay tuned! Thank you so much to all who have followed along with EN’s Badminton coverage. We also have to thank EquiRatings for providing super statistics and analysis to bring the event to life, and Nico Morgan for his beautiful photos. Go Eventing. 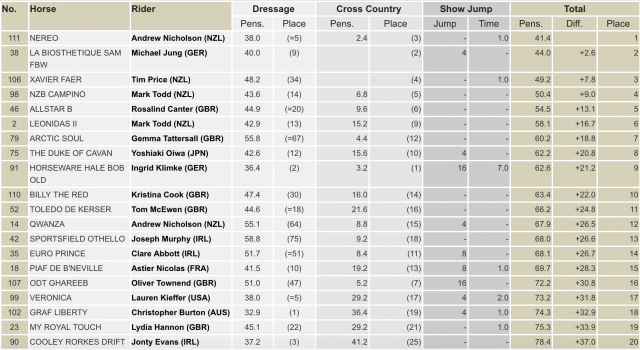