EN reader Rachel Helmbold sent us this amusing take on what the Year of The Horse actually means, according to  Chinese prophecy.  Most of these characteristics sound pretty familiar!  Many thanks to Rachel for writing, and thank you for reading. 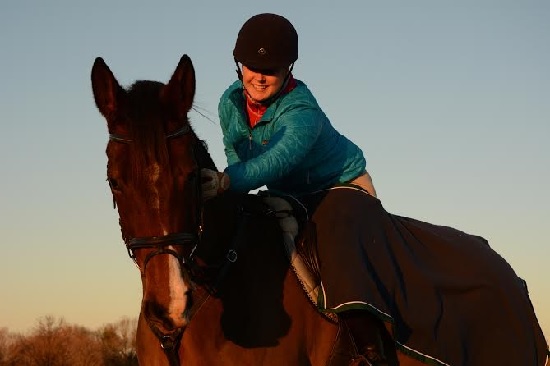 Apparently 2014 is The Year of The Horse according to the Chinese calendar. Wanting to be one who is educated on all things Equine and finding time on my hands (today is a company holiday and I didn’t wake up to 30 emails to start the day), I decided to Google the meaning and significance of this zodiac sign. I was interested to know what the Chinese believe this year might bring for those family and friends of mine born under The Year of The Horse which occurs on a twelve-year cycle. I am still not so sure what is in store for them, but I did find interesting the characteristics the Chinese have assigned to those born under this sign that supposedly correlate with characteristics that are inherently Equine. In my Google-search (note I did not say research) I found some very interesting traits. I must say, most of the characteristics mentioned resonated wholeheartedly with me and likely with anyone who has ever owned or loved a horse.

The most notably similarity would be “the life of a Horse might be filled with financial struggles and love/life issues”. This, my sympathetic horse friends, needs no explanation, does it? We could probably have second homes and weekly mani-pedi’s (and a reason to have mani-pedi’s!) if not for the financial strain horse ownership imposes. Also on the topic of money, “They typically overspend for entertainment and fun.” Entertainment and fun is exactly what my horse, Caesar, was contemplating when he thought, “I just KNEW it would be fun to chew the cushion off of the trailer bar, and the weather stripping off two stall doors, and the leather head piece off my halter, and the new reins when my mom wasn’t looking, and…”

With regards to health, “Horses will be prone to health issues.” What? Noooo! “They are more likely to be involved in accidents, too. To counteract such bad luck, Horses are suggested to donate blood.” Not sure about you, but typically the blood donation comes concomitantly WITH the accident when my horse is involved. Can I GET an Amen?

On training, according to the Chinese zodiac sign, the “Horse’s lucky numbers are 7, 3 and 2.” That might explain why those 4 and 5 stride lines just don’t ride so well at times, most notably the last line of a course when you are, correction – were, sitting in first! How about, “The Horse can be stubborn (REALLY?) yet they also have their earthy side.” Let me assure you, both sides are earthy…as is their tails, ears, eyes, and blankets this time of year. Actually, I don’t feel entirely guilty if I miss a day of riding as of late because my horse has walked around carrying the weight of a small child in mud on his blankets for 9-10 hours in his paddock all day. Yep, that’s strength training; can take the place of a flat work day.

More on training; “Horses could be arrogant during those times when they are doing chores under pressure.” Queue the walking-on-hind-legs-with-Jazz-Hands when asking for a sharper walk/canter transition. Yes, Caesar, I’m talking about YOU! “They could multi-task, but in between doing the work, they tend to get scattery, resulting in unproductiveness…” Now THAT would explain what goes on between the ears/between the fences on cross country. If I could hear my horse’s thoughts they might go something like this, “Hey, is that a FRESH mound of grass over there. I don’t know; haven’t seen one of those is the last two hours.” Or maybe, “Hey, who is that filly running ahead of me in the distance with those hideous hot pink boots and saddle pad? She just WANTS to get noticed. Is that her competitive edge…distracting me and all….well she might be nice…might share her grain with me….think I might….OH *&^%$ there’s a freak’n jump in front of me! How did that get there? DOPE!” That’ll be twenty please ma’am!

Relating to safety, “Horses will not let you down.” Um, I object your Honor. I have been “let down” as in from their backs to the ground more times than I can count. And while a broken leg, broken arm and severed intestines did not occur because of falls from their back to the ground, I can definitely say that is where I ended up after said tragedies – doubled over in pain by three different horses that “let me down.”

HOWEVER, before you non-horsey readers think we horse people (AKA, DHP’s – Damn Horse People – to those who know us) are completely insane (we are) there are some truths to ponder that the Chinese were kind enough to include relating to their interpretation of Equine characteristics. These qualities make up for the aforementioned liabilities. “As a friend, they will be there to cheer you up and they’ll even take you to great places just to ease out your sadness.” “You will not regret hanging along with a Horse as a friend…. He will be there for you as long as you need him. He is unselfish and willing to give you all his support. He is also practically fun to be with and you can expect no dull moments when you are with him. He will take you to great places… He will try to make you feel like you belong in his world.” Enough said. Here’s to health, happiness and lower Vet bills in 2014! Long live The Year of The Horse!