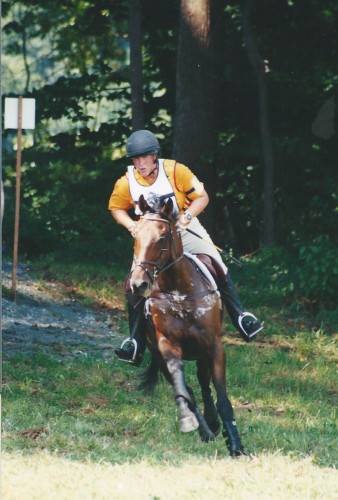 While a lot of our Eventing superstars are quite obviously failures at the track, Dollar Spot certainly earned his colors, racing 45 times, winning only six times, and garnering $23,758. Born in 1992 out of La Sylphide by Electric Blue, Dollar was a plain bay gelding who would eventually stand at 16 hands at full height. After his not so illustrious career at the racetrack, he was sadly sold at an auction, bound for the slaughterhouse. Luckily, Lost and Found Rescue of York, PA bought him directly off the slaughter truck and saved his life.

In 1999, at the age of seven, Dollar was saved again, this time by Jane Cory, who owned and operated the Eventing barn Pleasant Hollow Farm in Bucks County, Pennsylvania. The gelding arrived covered in fungus and severely underweight, and required several months to gain his health back enough to begin training. Rebecca Diesinger was a working student for Jane at that time, and took over his schooling, under instructions to make him safe for the lesson program. Adopted for $800 from the rescue operation, Dollar sported an old racing injury and was not slated to be an upper level competitor, but had a great attitude and Becca began to compete him lightly.

While Dollar seemed to take to Eventing immediately, he was not without his challenges. He was initially wary of water jumps, and Becca was trying her hand for the first time at training an OTTB, so much of their experience was experimental. “Dollar has the stereotypical thoroughbred brain,” explains Becca, “so dressage could be trying and stadium would be too fast and long, but we kept at it. Learning to show jump him well took years, and I think we finally got it together when we hit Intermediate”. The pair quickly adapted to each others quirks, and they got along great from the beginning. 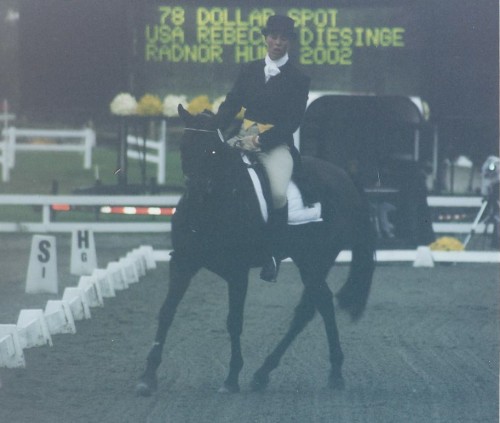 After easily moving through the levels up to Training, Becca and Dollar moved up to Preliminary in 2001. In 2002, they placed 5th at the VA CCI*, which was a first for both of them. Despite the fact that neither Jane nor Becca had intended to use him as an upper level horse, he seemed ready for the challenge, and with coach Bruce Davidson’s blessing, they moved right on up to Intermediate, eventually completing the Radnor CCI2* in 2002 with no cross country penalties. In 2003, Dollar and Becca completed their first Advanced horse trials at Fair Hill, placing 5th. “That was so unreal to me,” remembers Becca, “How could we be competing at this level against all these professionals in such a short time!?”

In the fall of 2003, Dollar recorded his first stop on cross country since Beginner Novice, but only due to the fact that he twisted an ankle on a big landing. Upon diagnosing the problem, Jane and Becca discovered that he was sporting a pin through that ankle, courtesy of his life at the race track.

In 2004, after rehabbing all winter, Dollar returned to the Advanced level, competing at Over The Walls, Millbrook and Menfelt, and finally heading to Fair Hill CCI3*. They had one stop on cross country, for which Becca takes full responsibility. “He tripped up a bank and I should have turned for the option, but I didn’t think fast enough”. They finished in 37th place, which was impressive considering they were competing at Beginner Novice only five years previous. 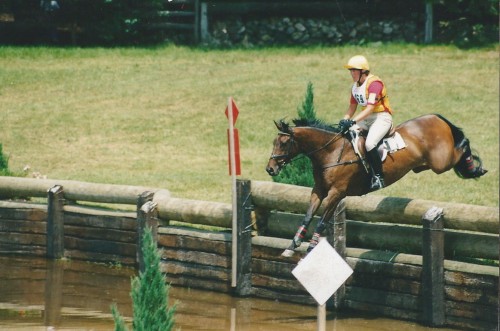 Dollar competed a few more times at the Advanced level in 2005, but injured his suspensory on the same leg as the pin, and they made the decision to retire him from upper level competition before he was injured beyond repair. Dollar returned to light work, and began teaching other riders the ropes over smaller obstacles. He even competed a few times at the lower levels with some of Jane’s students. In 2010, however, he was diagnosed with a hind end lameness, and it was decided that he should be fully retired. However, after a year of turnout, it was obvious that Dollar was bored, so he returned to work again, but this time without any jumping. Since 2012, Jane has been his main rider, working on dressage, hacking out and occasionally going for a good gallop!

Becca went on to leave Pleasant Hollow and start her own business at Flying Horse Farm in Pottstown, PA. She still gets thoroughbreds off the track and retrains them for Eventing, all the while remembering Dollar. “He showed me how important the heart of your horse is; his was huge,” remembers Becca. “I remember countless times that this plain brown horse saved me from my own inexperience. He taught me to keep going forward, and not to dwell on hard days, and learn from my mistakes. I want to especially thank Jane for giving me the chance to have such an amazing opportunity, and to feel what a real upper level horse is like. Not every upper level horse has to have a six digit price tag, you just need to find the right one”.