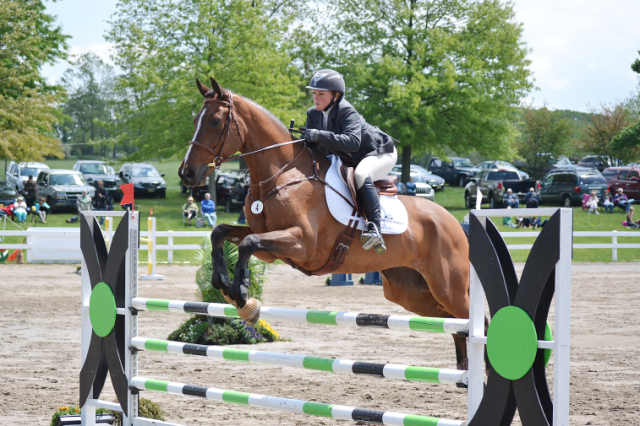 Colleen Rutledge and Covert Rights at Jersey Fresh in 2013. Photo by Jenni Autry.

In what Leah Lang-Gluscic called a “hilly and slick” show jumping course, rails fell to the ground throughout the CIC3* division this afternoon. Just two pairs came home clear inside the time: Kate Samuels and Nyls du Terroir and Caroline Martin and Quantum Solace.

Despite having one rail down, Colleen Rutledge and Covert Rights held onto their lead going into tomorrow’s cross country. Phillip Dutton and Seams Ready were also able to maintain their second place position with one rail lowered.

Kate Samuels moved up from fourth to settle into third place with her double clear round. Kate called Nyls a superstar on her Facebook page; this is definitely a great start to this pair’s fall season.

Kristin Schmolze and Ballylaffin Bracken dropped two rails to move from fourth into fifth place overnight. Caroline Martin and Quantum Solace bumped themselves up from eighth to sixth with their double clear round and put themselves into a great position looking forward to cross country. 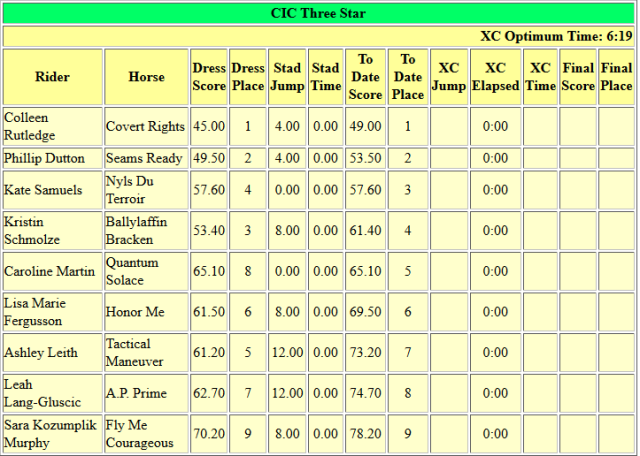 Rails were also frequent fliers in the Advanced division. A clear and fast round from Buck Davidson and The Apprentice allowed them to slide into the lead ahead of Phillip Dutton and I’m Sew Ready, who lowered one to add four to their score.

Allison Springer and Copycat Chloe enjoyed a nice move up, from a tie for eighth all the way to third, with a double clear round. Boyd Martin and Crackerjack also leaped up the board, from tenth to fourth, after leaving all of the rails intact. The top ten has definitely shifted after the show jumping, and could well change even further after the combinations take on Tremaine Cooper’s cross country course tomorrow. 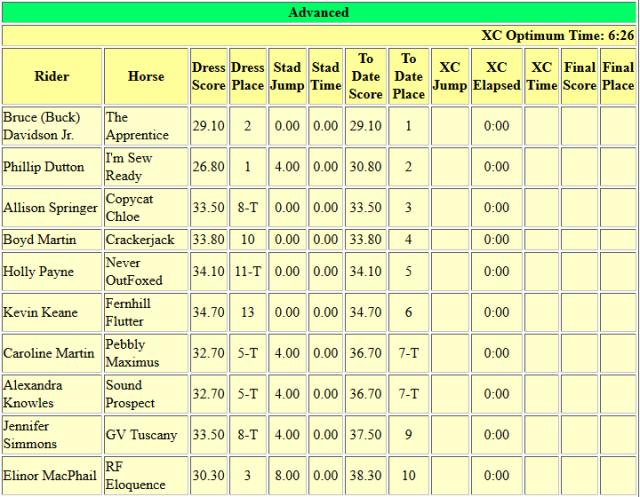 Don’t forget to check out the preview of the CIC3* cross country, complete with drone footage, that we posted earlier this afternoon.