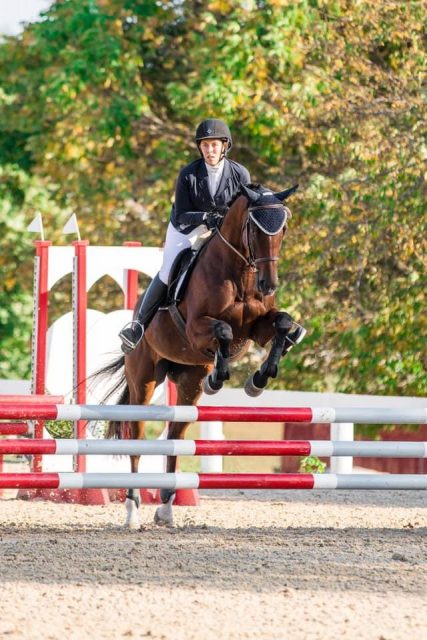 Thoroughbreds get their chance to shine in the next edition of the Real Rider Cup. Photo by Bethany P Photography.

After an enormously successful inaugural run in Lexington in June, which raised over $90,000, the Real Rider Cup is back — and this time, the charity showjumping event is heading to Fair Hill on September 16. Created by Anita Motion, the show is designed to raise vital funds for ex-racehorses rehabilitation, and features an exciting line-up of riders mounted on off-the-track Thoroughbreds.

Riders include former winner Penelope Miller, who has ridden in four previous Real Rider Cups, will ride once again for Team Racing Media, while fundraiser Keira Nygaard, whose parents Erik and Pavla own and operate Thor-Bred Stables, was among the leaders in Kentucky and comes now to Maryland with her eyes on the top prize. Paddock analyst and host for America’s Day at the Races and Saratoga Live, Maggie Wolfendale Morley, returns for her second Real Rider Cup. 1/ST Racing once again maintains a strong presence with Maryland Jockey Club’s marketing & events manager Brittlan Wall and analyst/broadcaster Kali Francois, among others. MidAtlantic Equine Medical Center also steps to support, furnishing a team of its own. And don’t count out the kids: Team Racing Kids is back with a strong lineup, too.

No one does horse racing like Maryland, and some of the state’s best racehorses will be demonstrating their talent in a new career. Two-time winner of the Maryland Million Turf, multiple stakes winner and earner of $434,801 Phlash Phelps will be in attendance with Sabrina Morris. Multiple stakes placed warhorse Grandiflora, winner of $357,334 will also compete with junior rider Jaidyn Shore in the tack. From outside of Maryland, Maggie Morley will be riding multiple stakes winner Ninety One Assault, who earned $440,283.

There’s plenty of time to get involved to show your support: while the roster of riders is closed, title sponsorships are still available for the Maryland event and riders are actively fundraising to meet their pledges. Spectators are encouraged and there is no cost for admission. Come for the thrilling competition and stay for the lively afterparty! Refreshments will be on hand courtesy of Wesley’s and Spring House Spirits with live music by Release. Learn more and donate today at therealridercup.com!