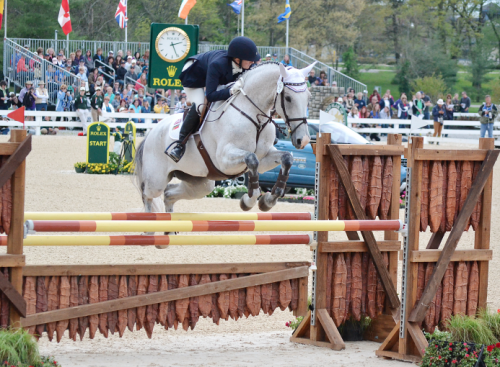 The Event at Rebecca Farm is upon us once again! Known as one of the top competitions of the year and certainly the highlight of the summer, Rebecca Farm is a treat to attend and a delightful place to compete. Elite combinations from around the United States take part in the long journey to have the privilege to compete in Kalispell, Mont.

For your convenience, I investigated each horse and rider pair who are currently entered in the CIC3* and compiled a list here recognizing their past performances. Two of our most anticipated pairs will not be competing, as Hawley Bennett scratched Gin & Juice, and Phillip Dutton also scratched Mr. Medicott. While we were all hoping to see both of these horses eat up the cross country, I’m sure we will see them out soon enough.

Jeanine Allred & Snap Decision II: Jeanine will be partnering with her 15-year-old grey Thoroughbred gelding for their fourth attempt at the CIC3* level. Jeanine has been riding this horse since 2008 and brought him up from Training level. They were fourth in the CIC2* at Rebecca Farms in 2011 and won a division of Advanced at Galway Downs last year. In 2012, they also finished 7th at the CIC3* at Woodside International HT.

Kevin Baumgardner & Jefferson D’Aurois: Ex-USEA President Kevin Baumgardner will be competing his 16-year-old Canadian Selle Francais gelding this year, looking for their first completion of a CIC3*. Kevin has been competing the gelding since 2007 when he got him from Peter Barry, who had previously completed a CCI2* on the horse. Kevin and Jefferson were recently fifth at both of their most current Advanced horse trials at Copper Meadows and The Spring Event at Woodside.

Andrea Baxter & Indy 500: Andrea is partnering with her own 8-year-old bay Thoroughbred mare for this year’s CIC3*. The pair were third earlier this year at the Twin Rivers CIC3* and completed two Advanced horse trials this spring. Andrea has brought the mare up through the ranks from YEH 4-year-old classes until this point.

Lauren Billys & Ballingowan Ginger: Lauren and Ginger are always a pair to root for, and they’ve had quite enough experience at the Intermediate level to warrant a move up to Advanced and CIC3*. The 11-year-old Irish Sport Horse mare sure can jump, and Lauren has known her since 2007, so they should be ready. The two competed in 2011 in the Pan American Games representing Puerto Rico and just recently moved up to the Advanced level after many years of Intermediate.

Zachary Brandt & Cavallino Cocktail: When Zach isn’t doing impressions of certain Australians, he’s riding his own 11-year-old grey Irish Sport Horse mare at the top levels. While the two are relatively new to each other and just moved up to the Advanced level this spring, they’ve already had an impressive result at the CCI3* level at Jersey Fresh, finishing in 10th place on their first trip east. This will be their first event back after that effort. It’s also noteworthy that Zach is one of the riders in the Eventing 25 program. 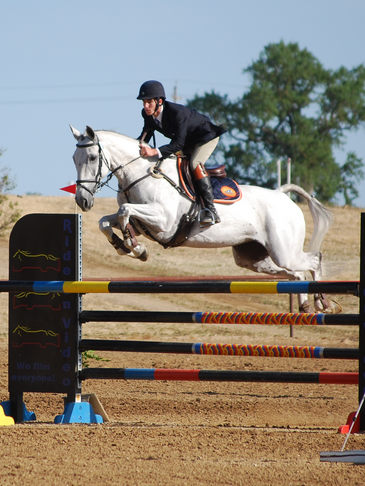 Barbara Crabo & Over Easy: Barb has two entries in the CIC3* this year, as well as quite a few in other divisions, so she will be a busy lady! Over Easy is a lovely dark bay Swedish Warmblood mare who just moved up to the Advanced level and will be looking for her first completion of a CIC3*. She was recently second at a CIC2* at Galway Downs and third at an Advanced HT at Copper Meadows.

Barbara Crabo & Eveready: Barb’s second entry is her longtime partner Eveready, a 14-year-old Swedish Warmblood gelding. The pair have been competing together at the Advanced level for six years now, completing several three-star competitions and attempting Rolex twice. While Eveready had the majority of 2012 off of work, he came back this spring and won his division of Advanced at Woodside.

Ellen Doughty & Sir Oberon: Ellen will be riding her own 11-year-old Holsteiner gelding this week, hoping to repeat her performance at the recent Chattahoochee Hills CIC3*, where they were second. While they only recently moved up to the Advanced level, it’s hard to find a mark on their cross-country record, and they’ll be looking for a nice solid round here on this challenging course.

Phillip Dutton & Ben: Phillip scratched his newest mount Mr. Medicott, but he still sent one of his top horses to Montana in Ben. Ben had the vast majority of 2012 off work due to an injury, but came out this spring as good as new, placing third at the Chattahoochee Hills CIC3* and winning the Bromont CIC3*. Ben is owned by Team Rebecca, so it will be a nice homecoming for him!

Pam Fisher & Sea Lion: Sea Lion has the distinction of being the only stallion competing in this division, as well as being among the elite few stallions who ever successfully compete at this level period. The 14-year-old Thoroughbred has been competing at the Advanced level since 2010 and has completed several three-star competitions. The pair were most recently fourth at the CIC3* at Twin Rivers, and Pam will be looking to bring down her dressage score in order to be competitive here.

Katy Groesbeck & Oz Poof of Purchase: Besides Barb Crabo, Katy is the only one in the CIC3* with two mounts, which is quite impressive. She will be competing her two Anglo-Arabian brothers. Poof of Purchase is an 18-year-old gelding who was most recently the winner of Copper Meadows Advanced, as well as the winner of the Twin Rivers CCI2* this spring. He is the less experienced of the two geldings, but his record is impeccable, and I bet they will do quite well this weekend. (Funny note: “Poof” is not a typo. As I was furiously searching for “Proof of Purchase,” I realized that his name is Poof!)

Katy Groesbeck & Oz The Tin Man: Oz The Tin Man is the younger of the two brothers, and at only 16 years of age, he might be small of stature (15.2) but he is an excellent event horse. Katy recently won the Intermediate at Copper Meadows on him, as well as winning a division of Advanced at Woodside last year. The two were second at Rebecca Farm CIC3* last year, and they will be quite competitive if the weekend goes their way. Katy will be drawing on her recent education from the Eventing 25 Training Sessions with David O’Connor to put her name on the board again. 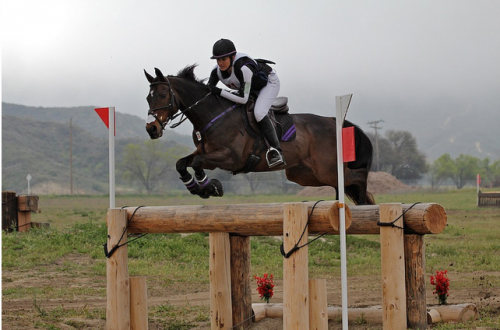 Geriann Henderson & Kingslee: Geriann and her 15-year-old bay Thoroughbred gelding Kingslee hail from Colorado and have just recently moved up to the Advanced level this spring. They finished their first Advanced together at Twin Rivers in March with a 10th place. Geriann has been partnered with Kingslee since 2008 and they have come up the levels together. They will be looking for a solid clear over this championship course.

Avery Klunick & In It To Win It: Avery and her 12-year-old New Zealand Sport Horse gelding will be contesting their first CIC3* at Rebecca Farms this week and will be looking for a nice educational round. The two were sixth last year at the NAJYRC CH-Y** representing Area V and were recently ninth in a division of Intermediate at Copper Meadows. Avery is another of the Eventing 25 riders competing in the CIC3* this weekend.

Emilee Libby & Nonsensical: After taking a three-year break from eventing, Emilee is back with a lovely 10-year-old Thoroughbred gelding by Point Given. Nonsensical moved up to the Advanced level this spring and won the CIC2* here at Rebecca Farms last year. Emilee is a heck of a rider, and I can see her surprising people this weekend. Just because she disappeared for a few years does not mean you can count her out!

Jennifer McFall & High Times: Jen McFall is absolutely thrilled to find herself with such a cool horse and will be enjoying every moment of this week. She recently made the trek east to compete at the Jersey Fresh CCI3* and placed 9th. Jen and Billy were also sixth at the CIC3* this spring at Galway Downs, and the two have benefitted from some recent training with Coach David O’Connor leading up to the event. You will be able to spot Jen and her Dragonfire crew by their black and red outfits and their giant smiles.

Gina Miles & Chanel: While Gina Miles will never replace the unbelievable McKinlaigh, she has found a lovely upper level mount in this 11-year-old Danish Warmblood mare. The pair have been competing on and off at the Advanced level since 2011, when Chanel placed 8th at the Galway Downs CIC3*. They were recently 10th at the CCI2* at Twin Rivers and fourth at the Advanced at Copper Meadows this spring.

Kristi Nunnink & R-Star: The crowning champions of last year’s CIC3* at Rebecca Farms return! Rosie is easily one of the best looking and most athletic horses in the country, and her form in the past year has been better than ever. This spring, the 12-year-old Holsteiner mare made mincemeat of Rolex Kentucky and placed eighth overall. Last fall she completed her first Burghley with only a few time penalties and one rail down on the last day. After all that, Kristi and Rosie are planning on going to Pau in the fall, and it’s no wonder that they are also on the USEF Eventing High Performance World Class list.

Katie Ruppel & Houdini: After completing Rolex Kentucky this spring on her long time partner Sir Donovan, she sold him to Canadian Peter Barry but has luckily found another Advanced competitor in her unlikely Thoroughbred Houdini. Katie will tell you herself that nobody believed in this horse for such a long time, and so it must be very gratifying for her to prove them all wrong! The two moved up to Advanced last year, winning at Poplar Place in the fall, and while they suffered some bad luck at Red Hills and The Fork this spring, they bounded back with a solid fifth place finish at Jersey Fresh this spring in the CCI3*.

Jennifer Taxay Kelly & Taboo: Jennifer and Taboo, a 9-year-old chestnut Thoroughbred mare, will be looking for a solid round this weekend. The pair from California competed on the East Coast last fall, including their move up to the Advanced level. They were most recently 12th at Copper Meadows in the Intermediate division.

Jordan Taylor & Cambridge: Jordan and her 12-year-old bay Thoroughbred mare have just moved up to the Advanced level this spring, but the two have had a good preparation for their first CIC3*. They were most recently 15th at the Advanced at Woodside, and I’m sure they will be hoping for a good solid round on the cross country and a safe addition to their education at this level.

Jolie Wentworth & GoodKnight: Jolie & GoodKnight were amongst the few to survive Luhmuhlen CCI4* this spring, and this will be their first event back after that effort. GoodKnight is a small but mighty Selle Francais/Thoroughbred gelding and has been partnered with Jolie for quite a while now. Last year they were third in this division at Rebecca Farms, and if they can keep themselves together enough for the dressage, they should be quite competitive. Look for the yellow and blue blazing past you on Saturday!