Now in his fourth year of designing the CCI4*-S/Advanced cross country courses at Red Hills International Horse Trials in Tallahassee, Florida, Mike Etherington-Smith said his vision is “getting there now” … “I’m really pleased with the way everyone has got in behind it all — the way it looks and the quality of the presentation. For sure there are always other things to do, but ultimately there’s only so much real estate at this venue.”

Elinor Klapp-Phipps Park, which serves as the host site for Red Hills, is maintained year-round by the City of Tallahassee, Leon County and the Northwest Florida Water Management District. Mike and David O’Connor, who is the assistant CCI4*-S/Advanced course designer, set out on a mission in 2015 to significantly improve the footing at the venue. That goal is well on its way thanks to year-round maintenance — watering, aeration, aggravation and mowing — from the City of Tallahassee and its various affiliates. 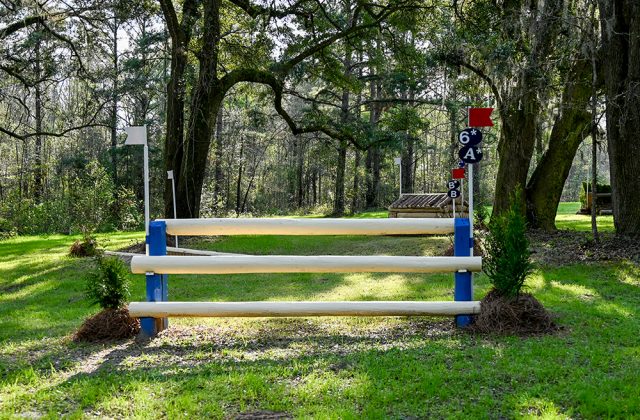 Fence 6 on the CCI4*-S course, The Shire Coffin. Photo by Shems Hamilton/Red Hills.

Co-organizers Jane Barron and Marvin Mayer have also worked with the Tall Timbers Foundation and Friends of Our Parks to mindfully remove trees from the galloping tracks and add new lines through the trees to provide a more flowing feel to the course. “The important thing is the flow of the track and not placing too many jumps in the trees. With something like this, you can get horses a bit too suspicious if you surprise them.”

Mike reversed the direction of the CCI4*-S track in 2018 and has kept the same direction for this year, with the new tracks providing a fresh feel. “I set it up as an early season run. It’s up to height for sure, but I don’t squeeze in too much, like having two efforts in the water. That’s not what I think you want at this time of year. The riders just want to come run and jump.”

Without further ado, let’s take a tour of the CCI4*-S course. Fence 1, the Raised Garden, is an inviting flower box, followed by the Chicken Coop at fence 2, and a large hanging log at fence 3 called Loch Ness Monster. The first combination comes at fence 4ABC, Roll on Along, where Mike emphasized “they’ve got to be switched on.” The combination is set on a right bending line, starting with a narrow rolltop at A, then three strides bending right to a left-pointed corner at B, then three strides bending right to another narrow rolltop at C. 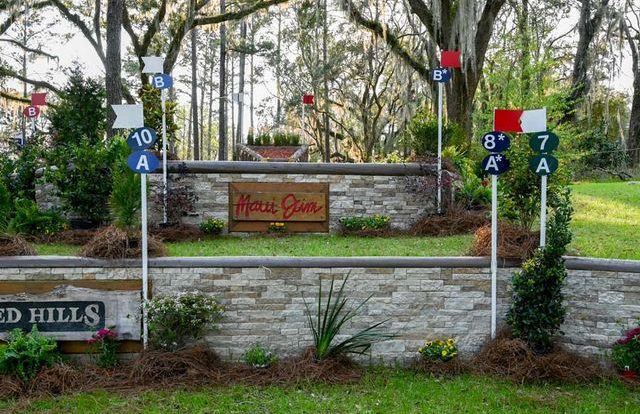 The Sheep Shelter at fence 5 then leads to the the coffin combination at fence 6, The Shire Coffin. Riders will jump in over an airy set of rails at A, go on one stride to the ditch at B, then one stride to a narrow angled house at C. Fence 7, the Ayavalla Oxer, is an open oxer, before the steps at fence 8ABC, Jump for Maui Jim. The direct route requires jumping up two steps to a skinny chevron at C on one stride. Mike said this is a “gimme” fence, and the direct route should ride straightforward, but he provided an option for the skinny because it would be difficult to get back to it should riders have a glance-off.

Fence 9ABC, the Summer Concession Stand, gives a breather before the first water complex at fence 10, Summer Camp Cabins. Riders will drop into the water over hanging logs at A, then turn left through the water to two angled houses set on a forward one stride as the B and C elements. “The key here is not to jump too left of the first house,” Mike said, “and jumping further to the right gives the horses a better chance to see the second house.”

Fence 11, a beefy table called Mardi Gras Picnic, leads to one of the longest galloping stretches on course. Riders will then come to the Plantation Houses at fence 12AB, two houses set on a sloping right bending line. Fence 13, Goliath’s Gap, is a narrow brush angled atop a ditch. 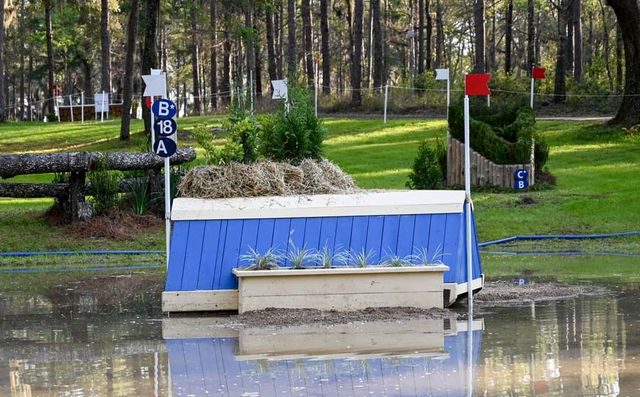 Fence 16BC in the Second Time Through. Photo by Shems Hamilton/Red Hills.

Riders will make two trips through the next water complex, first at fence 14AB, Nothing Stops a Fishing Trip, which requires a drop in over a log at A — which Mike lowered by three inches this week to 1.10 meters — then splashing through the water and back onto land before jumping a boat at B. Then it’s on to fence 15 in the woods, a double brush called The Rookery, before circling back to the water.

Fence 16ABC, Second Time Through, will likely emerge as the most influential combination on course. Riders will jump a skinny double brush at A set close to the water’s edge, then turn left into the water and jump a right-pointed corner at B, then proceed back onto dry land to jump a skinny triple brush as the C element. Riders will then kick on to the Cordwood Stack at fence 17, followed by an open oxer called Another Birthday at fence 18 near the main arena.

Then it’s a long galloping stretch to fence 19, a table called The Spring House, before the final combination on course at fence 20AB, The Spring House Corners. These two right-pointed corners are set on a straightforward three strides, but Mike noted that at the end of the course both horse and rider might be thinking about the finish flags as opposed to accuracy.

Fence 21, a table called What’s For Lunch, and fence 22, The Grand Finale — which all the courses across all levels use as their final fence — complete the CCI4*-S track. The course, built by Tyson Rementer and Levi Ryckewaert, is 3,760 meters long with 35 total jumping efforts and an optimum time of 6 minutes, 36 seconds. Scroll down for a fence-by-fence tour of the course from CrossCountry App with beautiful photos from Shems Hamilton, who has served as the fabulous volunteer photographer for Red Hills for many years. You can view all the Red Hills courses on CrossCountry App’s website.

In the 20-year history of Red Hills, only six horses have caught the optimum time in the CCI4*-S, so you can absolutely expect time penalties to be influential today. Less than six seconds separate the top five after dressage. CCI4*-S cross country starts at 12:08 p.m. EST. There is no live stream, but EN will be running live updates.

Click here to catch up on all of EN’s Red Hills coverage thus far. Go Eventing.