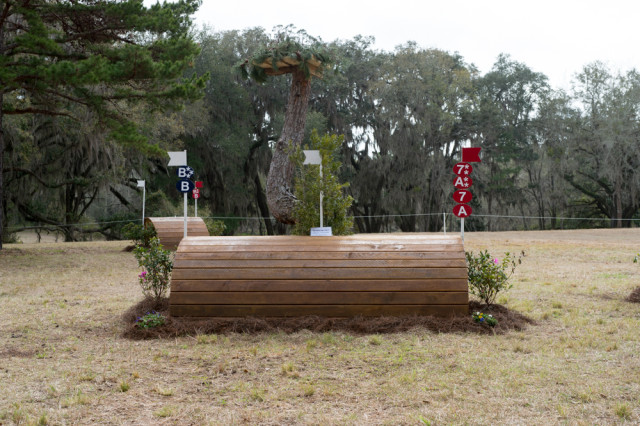 Review the CIC3* live updates here. In this post we’ll follow along with the 40-plus CIC2* competitors. Keep checking back to this post for EN’s live updates, follow us on Twitter @eventingnation and you can tune into PRO Tour Radio to hear announcer Nigel Casserley and Spencer Sturmey’s commentary throughout the day.

2:21 – RF Tabasco and Marilyn Little start on course for the CIC2*. This division is running 28 minutes behind schedule now. They were second after dressage. Marilyn also leads the division with RF Scandalous.

2:31 – 15.2 time penalties for April Simmonds and Impressively Done. They were 12th after dressage.

2:35 – Lauren Kieffer clear through 14 with Jackie Mars’ Vermiculus. Commentators say she is having a great time on course.

2:41 – Just 8 time penalties for Matt Kidney and Iceman. Kim Severson and Cooley Cross Border on course now. They are sixth after dressage.

2:42 – Tiger Lion refuses to jump the Corner Conundrum at fence 8 for Buck Davidson and is eliminated.

2:43 – Shocking … Kim and Cooley Cross Border are also eliminated by refusals at the Corner Conundrum.

2:44 – Runout at second element of Arena Offsets for Clara Cargile and White Indian.

2:49 – Two runouts at the Corner Conundrum for Calvin Ramsay and Hoodwink.

2:53 – Pedro Gutierrez retires Racques Biats after a second refusal at the brush oxer at 5.

2:55 – Katherine Rivera’s Royal Lufttansa picks up a refusal at 4.

3:00 – Jo Meyer and Clip Clop part ways at second element of Offsets early on the course.

3:02 – Refusal at second element of the Arena Offsets (fence 4) for El Paso and Lindsay Beer. They are clear on the second attempt.

3:02 – Provisional score is 30 time plus the refusal at 5 for Katherine Rivera and Royal Lufttansa.

3:04 – Fernhill Cascum Marco and Katlyn Hewson nicely through the Arena Offsets at 4, which are proving to be one of the trickier fences on course. El Paso and Lindsey Beer have retired on course.

3:05 – Waylon Roberts and Bill Owen get closest to optimum time so far in the CIC2*, with 1.2 time penalties. That’s put them into the lead from 11th place at the moment.

3:06 – Nicholas Hansen and Will Smith had a fall at the Sawgrass Water at 19 and are unfortunately eliminated. Will Smith taking a self-guided tour of the course.

3:11 – Fernhill Cascum Marco and Katlyn Hewson pick up 7.6 time penalties for 62.6, which puts them into fourth place for the moment.

3:15 – Muggle and Nilson Moreira da Silva riding for Brazil move into fourth place with just over one time penalty. 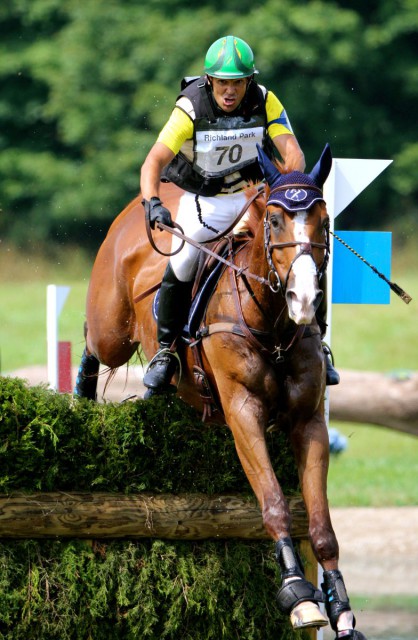 3:18 – A runout at the second element of Arena Offsets for Hallie Coon and Azrael. Clear jumping with 17.6 time penalties for Jennie Jarnstrom and Penelope.

3:20 – Another pair falling victim to the Arena Offsets. Calvin Ramsay and Mac Gilly Cuddy pick up a refusal.

3:21 – Callie Evans pops out the side door when her buckskin Glendening Avis caught a knee at the 24th fence. Both are okay and walking off course.

3:24 – Guy’s Elegant Miss and Mélissa Boutin post no jumping, 22.8 time penalties. At the halfway mark of the CIC2*, Waylon Roberts still leads with Bill Owen, Marilyn Little is second with RF Tabasco and Caroline Martin and Spring Easy are third.

3:24 – Calvin Ramsay and Mac Gilly Cuddy have been eliminated for three refusals on course. Diana Portwood and Cinerescent post 21.6 time penalties with no jumping faults.

3:26 – Refusal at the Arena Offsets for Buck Davidson and Riviera. Hallie Coon and Azrael cross the finish with 9.6 time despite a refusal on course.

3:28 – Sinead Halpin and Topgun take down the flag but are clear through the Offsets in the arena, but they pick up a refusal at the Brush Oxer at 5.

3:30 – Tik Maynard and Dutch Times were held on course at the water at 19 and one horse passed by them. We’re not sure why, but he’s back on course.

3:30 – Riviera picks up another refusal on course with Buck Davidson. This time at the Hog House at 18.

3:32 – Buck Davidson having to use all his experience to pilot Riviera home. They clear the last carrying two refusals.

3:39 – Diana Heinrich parts company with Weja Annabridget at the Weldon Wall at 15 and are unfortunately eliminated.

3:40 – Lauren Kieffer and Lndmk’s Monte Carlo were third after dressage but picked up a refusal early on course at 4b. 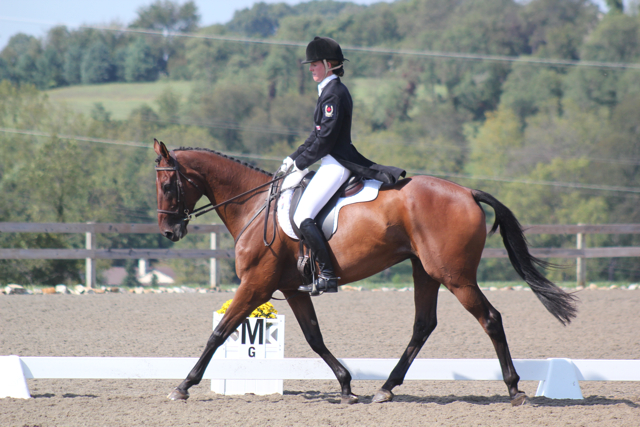 Selena O’Hanlon (CAN) and A First Romance. Photo by Samantha L. Clark

3:47 – Still aren’t sure why Tik Maynard and Dutch Times were held at the water, but they finish clear with 2.4 time penalties. They go into second place!

3:50 – Our leaders are on course. Marilyn Little and RF Scandalous scored a 33.9 in dressage to take a commanding lead in the CIC2*.

3:51 – Jessica Schultz and Lock N’ Load have a fall at the second fence. How frustrating! They were tied for 8th after dressage.

3:55 – Provisional scores for Juan Larrazabal and Alasca LV Z: clear jumping with 26.4 time. Ryan Wood and Alcatraz are also clear and very fast with 2.8 time penalties to move into the lead by 0.1 penalty points with overnight leaders Marilyn and RF Scandalous on the way to the last.

3:59 – Joe Meyer will be glad to get the Arena Offsets and Brush at 4 and 5 this time with Southpaw after having parted ways in the main arena earlier with Clip Clop.

4:00 – Marilyn Little and RF Scandalous will maintain their lead going into show jumping tomorrow. They finish cross-country clear with 14 time penalties and will show jump on a score of 47.9. 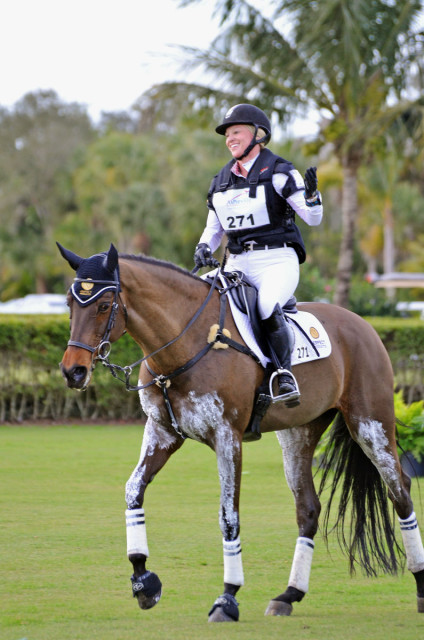 4:01 – Elana von Doeler falls from High Star 3E late on course. Elana is up on her feet but unfortunately eliminated. Banbury Sky and Samantha Elsenaar have a refusal in the main arena and are clear on the second attempt.

4:04 – Commentator Spencer Sturmey says Joe Meyer is much sounder in the saddle than out due to a pelvis injury. He just crossed the finish with Southpaw. Kelly Prather and D. A. Duras finish with 20 jumping and 29.2 time.

4:05 – Just a few horses left to start on the CIC2* course. Then the day will finish out with the Intermediate divisions. Joe Meyer and Southpaw pull in just over 14 time penalties on their clear round.

4: 07 – A refusal for Diana Burnett and Diamond Cut III at fence 14b, the Stairway to Heaven. They were 15th after dressage in this big division.

4:08 – Matthew Bryner and Jak My Style looking to move up from their 20th place position after dressage. Spencer says they are traveling “at speed and hardly taking a pull.”

4:10 – So many countries represented here at Red Hills! Elena Ceballos and Nounours du Moulin on course now riding for Venezuela and hoping to ride at the Pan American Games in Toronto this summer. They made a circle between fences early on course adding only time.

4:11 – Caroline Martin on course again, this time with Effervescent owned by her mother Sherrie Martin. They were fifth after dressage with a 45.8. This is this horse’s first 2*.

4:12 – Be Mine and Buck Davidson, fourth after dressage, are now on course.

4:14 – Matthew Bryner and Jak My Style jump clear with 8 time for a 2-day score of 81.7, which should move them up the leaderboard. Clear jumping also with 16 time for Caroline Martin and Effervescent.

4:17 – Provisionally, Celtic Rhythm and William Hoos finish clear with 26.4 time penalties. Elena and Nounours du Moulin finish the course after a sticky moment at the butterfly at the final water.

4:18 – Buck Davidson and Be Mine are the last CIC2* competitors today. They are clear the Farmyard at 21. Just a few from home now.

4:20 – Buck checks his watch as he and Lisa Darden’s Rheinland Pfalz-Saar gelding head for home. They could take the lead if they are quick enough.

Thanks to PRO for providing the phenomenal PRO Tour Radio that allowed us to listen to the commentary from the announcers today. Stay tuned for additional reports from Tallahassee!