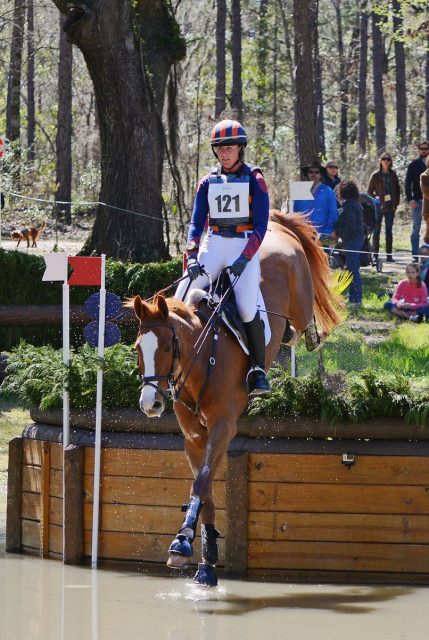 Red Hills cross-country gets underway shortly, so stay with us to follow along with what’s happening on course for the Advanced, CIC3* and CIC2* divisions. Keep checking back to this post for EN’s live updates, follow us on Twitter @eventingnation and you can tune into PRO Tour Radio to hear announcer Nigel Casserley and Spencer Sturmey’s commentary throughout the day. Preview Hugh Lochore’s cross-country course here, and read his thoughts on the course here. The CIC3* is scheduled to begin at 12:25 pm, and the CIC2* gets started at 1:50.

Hannah Sue Burnett and her new ride Jitter Bug are the overnight leaders in the CIC1* after cross country on a score of 38.2, crossing the finish clear just 1 second over the time. Marilyn Little and RF Overdressed, the leaders after dressage, had a runout at the Corner Conundrum which unfortunately drops them out of contention.

Area V Young Rider Alexa Ehlers and Juicy Couture move from fifth to second with a double-clear round. Buck Davidson and Carlevo move into third with 2.4 time penalties on a score of 43. Buck and Carlevo were held briefly on course when Arden Wildasin and Watch Out fell at the Hammock. Arden has been transported to hospital for precautionary examinations, and we will update you on her condition as we hear it. 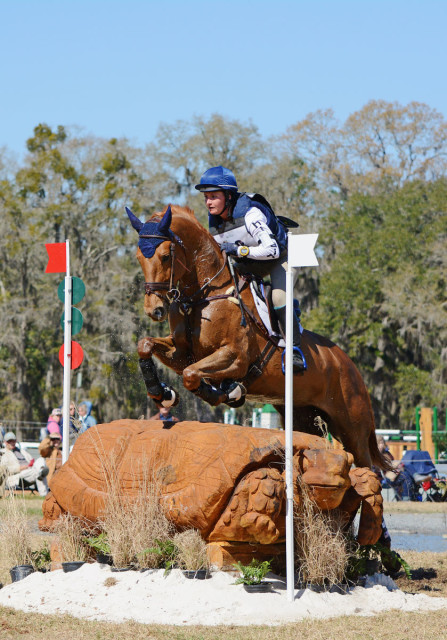 Lauren Kieffer and Veronica are the current leaders in the Advanced division on a score of 29.8, followed closely by Jenny Caras and Fernhill Fortitude and Buck Davidson and Petite Flower. Maggie predicted Veronica to win and Petite Flower as the Dark Horse. Time will undoubtedly be a factor!

12:01 EST – Nigel Casserley announced that two bald eagles are circling the course just now as we wait for the start of Advanced cross country. We’ll take that as a very good sign for a good day ahead!

12:08 EST – And we’re off! First on course in the Advanced is Lisa Barry and F.I.S. Prince Charming, an 11-year-old New Zealand Thoroughbred gelding. They won the Advanced at Red Hills last year. They are currently in 11th after dressage.

12:15 – High Finance and Melissa Miller pick up a refusal at the Owl early on course, clear on the second attempt. They picked up another refusal at the Osprey Offsets at 8.

12:16 – No jumping and 10.4 time penalties for Lisa Barry and Prince Charming is the provisional score for our Advanced trailblazers.

12:17 – Julie Norman and Consensus jump the huge Hammock at 17. Waylon Roberts and Kelecyn Cognac are home with no jumping, 5.2 time penalties.

12:18 – The horses are leaving the start box at 2-minute intervals so coming very fast with at least three horses on course at any one time.

12:20 – Julie Norman and Consensus on over the last, provisionally clear with 26.8 time penalties. Jenny Caras in second with Fernhill Fortitude are on course.

12:24 – Jimmie Schramm left a leg at the first element at Nature’s Circle, but they recover and cross the finish with a clear round after reportedly jumping huge around the majority of the course.

12:28 – No jumping penalties, 20.8 time for Ashley Johnson and Tactical Maneuver.

12:30 – Jenny Caras and Fernhill Fortitude picked up no jumping, 14.8 time for 47.8 penalties as a two day score. Kelly Prather and Truly Wiley part ways at the Sawgrass Water but they are fine and walking off course.

12:32 – Both Veronica and Petite Flower are on course now. They are first and third after dressage respectively.

12:35 – A.P. Prime and Leah Lang-Gluscic finish with no jumping, 8.8 time – that puts them into second place for the moment!

12:38 – Imperial Melody and Cody Sturgess pick up no jumping penalties and 17.2 time penalties. Buck Davidson and Petite Flower are close to the end and clear so far. Flower is being a bit strong! 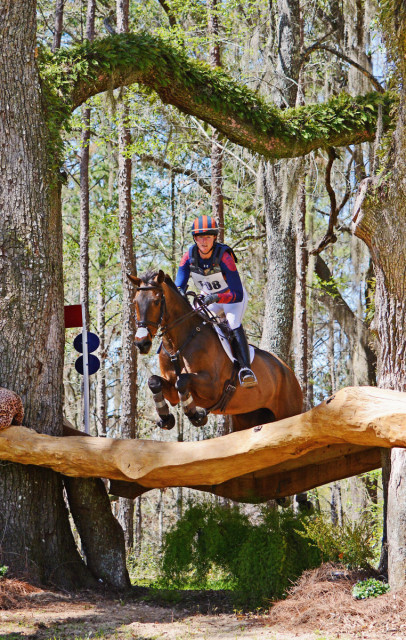 12:41 – No jumping and 10 time penalties for Buck Davidson and Petite Flower. They will remain in third going into show jumping.

The 3* is already underway! No breaks for journalists with full bladders #holditin — Eventing Nation (@eventingnation) March 7, 2015

12:42 – There is no break between Advanced and CCI3*, so Marilyn Little and RF Demeter have already started on course. They are currently in fourth after dressage and predicted to win by Maggie!

12:45 – A very unfortunate fall for Marilyn Little and RF Demeter have a fall at the water at 19. Both are up and okay. This pair has completed four 4* and seven 3* with no cross country jump penalties since 2013, but this is the second time they’ve parted ways at Red Hills.

12:49 – Elinor McPhail and RF Eloquence part company at fence 6, the brush. RF Eloquence headed back to the barn on his own.

12:51 – Leader Liz Halliday-Sharp and Fernhill By Night pick up a refusal at the Osprey Offsets. They have retired on course.

12:58 – A refusal for Kyle Carter and Conahys Courage at the first element of the Osprey Offsets. This is proving to be the tricky fence on course!

1:01 – Provisional score for Jenni Jarnstrom and Cape Town – no jumping and 16 time.

1:01 – Kyle Carter has fallen from Conahys Courage at the Shires. Buck Davidson and Elisa Wallace have both been held on course.

1:04 – Vandiver and Werner Geven pick up 8.4 time penalties, no jumping penalties. That’s one of the fastest rounds so far.

1:06 – The commentators have said that the horse ambulance will be taking Conahys Courage back to the stables but is reported to be fine. We’ve learned that Kyle actually fell at the Stairway to Heaven. We are waiting on word of his condition.

Proud of my wife Jimmie who stomped around the Red Hills Advanced on the Hells Bells! #ibelieveinbells — Dom Schramm (@DomSchramm) March 7, 2015

1:18 – We’ve just heard that we are 3 minutes to getting back under way. We will keep you updated on Kyle’s condition as we learn more.

1:26 – Elisa Wallace and Simply Priceless crossed the finish. Czechmate and Lauren Kieffer, second after dressage, are on course now.

1:29 – Refusal for Buck and The Apprentice at the Sawgrass Water. They’ve have opted to retire there.

1:34 – Lauren Kieffer has piloted Czechmate to the finish line in his first CIC3* with 14.4 time penalties which puts them in the lead at this time.

1:37 – Runout at the Osprey Offsets for Atlantic Domino and Jacob Fletcher. They were ninth after dressage.

1:41 – Kelly Prather and Blackfoot Mystery finish with 20 jumping penalties and 30.8 time. Very unfortunate as they were seventh after dressage.

1:44 – Marilyn Little gets redemption on this course after her earlier fall with RF Demeter. RF Quarterman moves from fifth to second with 12.4 time penalties. Ellen Doughty-Hume and Sir Oberon have a runout at the Corner Conundrum at 9.

1:46 – Jacob Fletcher and Atlantic Domino finish with just over 20 time penalties despite their earlier refusal. Alexandra Knowles and Sound Prospect jump the last after a good round. They were tenth after dressage.

1:49 – 26 time penalties for Justine Dutton and Jollybo. Alexandra Knowles and Sound Prospect move into third for the moment.

1:51 – Five left to start in the three-star. Currently the standings show Lauren and Czechmate in first, Marilyn and RF Quarterman second, and Alexandra Knowles and Sound Prospect third.

1:52 – Liz Halliday-Sharp is on course with her second ride HHS Cooley. They were third after dressage. They “climb all over” first element of Osprey Offsets and put huge jump in over second element, but they’re clear.

1:55 – Jennie Brannigan and Cambalda no problems at the Osprey Offsets. This horse is such a pleasure to watch on cross country! HHS Cooley clear through 14 and the Weldon Wall at 15. Liz is “no stranger to danger” says the commentators. She’s also a professional racecar driver. Talk about being an adrenaline junkie!

1:56 – Werner Geven is on course with his second ride, Vilas County. Caroline Martin “lucky and clever” through fence 24 with Quantum Solace.

1:57 – Elinor MacPhail and True Dynamite catapult to third place with no jumping, 5.2 time penalties (fastest so far I believe).

HUGE cheer at Sawgrass Water as Caroline Martin clings to Quantum Solace and saves it after Nacho catches a leg at D. Save of the day! — Eventing Nation (@eventingnation) March 7, 2015

1:59 – Buck Davidson and Copper Beech pick up a refusal at the Brown Owl Howl. He’s decided to retire.

2:01 – Caroline Martin and Quantum Solace have no jumping and 8.4 time, putting them in fifth place. Elisa Wallace Simply Priceless move into sixth with no jumping and 5.6 time.

2:02 – Werner Geven and Vilas County in orange and black are the last combination on course. They see a good stride at the last water and are clear over the last. Elisabeth Halliday-Sharp and HHS Cooley have no jumping and just over 14 time penalties. They move into second. Jennie and Cambalda have 9.2 time penalties which moves them into third.

Stay tuned for a full report on the CIC3*. The CIC2* gets underway on course at 2:15. Follow along with the live updates for the CIC2* division here.