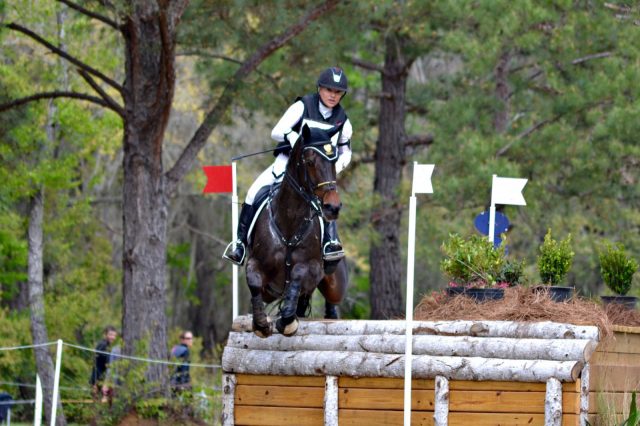 Red Hills cross country! What a trip! Horses and riders ducking in and out of the woods, Spanish moss dripping from the trees like the backdrop of some Southern gothic murder novel, a pinball chute booby-trapped with massive jumps and lined by Tallahassee’s finest diehard tailgaters. It’s tough for making time but great for keeping competitors and spectators alike entertained.

I could barely hear the announcer but throughly enjoyed the civilian commentary swirling around me at the first water complex at #10AB. A kid in pink spandex galloped circles around the crowd, screaming “I LOVE HORSES!” every time one came into view. A bored dad cracked open beer after beer, reclined contentedly in his FSU folding chair, while mom pondered aloud whether there were any Quarter Horses in the mix. Nope!

When a competitor had a smooth ride, the crowd cheered; if they had a sticky go or required a do-over, they cheered even louder. The frangible rails into the water got quite a workout — no fewer than three horses pulled them down — and these got the biggest cheers of all. What kind of animal will plough bulldozer style into a fence made out of telephone poles, scatter them like pick-up sticks, then come back for another crack at the bugger? Event horses, that’s who!

My personal favorite was Joe Meyer’s Clip Clop, who changed his mind about the #10A jump into the water, put his front feet between the bottom two rails, and when he backed up he pulled the rail back with him. It was still strewn kind of diagonal in front of the fence, like a very large and poorly placed canter pole, when he circled back around for a second attempt and magically eked out a line to the fence. A kick, a leap, a splash, a roar from the crowd, and onward they raced into the great CIC3* unknown. That’s more than just sport! That is LIFE! Thank you, Clip Clop!

Guess who won the CIC3*? Surprise, it was dressage<show jumping leader Marilyn Little and RF Scandalous! I am so tired of writing about this lady!

Just kidding, Marilyn and “Kitty” are definitely among our great hopes for Team USA at WEG and a good run here is a good run for ‘Murica. So!

“She was brilliant from start to finish,” Marilyn says. “She read everything really well. The horses looked great at the end of the course, watching them come through, which is a good thing to see this time of the year. All the riders were appreciative of that, to come out with a better horse than you went in with was awesome. It was beautifully designed.”

Marilyn told us yesterday that she was going to let Kitty tell her how fast she wanted to go, and they started out on course conservatively in the spirit of moderation and control. Kitty stumbled upon landing from fence #3 and pulled a shoe, which Marilyn didn’t realize at the time, but they carried on and kept it chilly until they were past #6AB, at which point Marilyn was like “You do you, Kitty!” and Kitty stepped on the gas. They came home with 10.4 time penalties for the win. 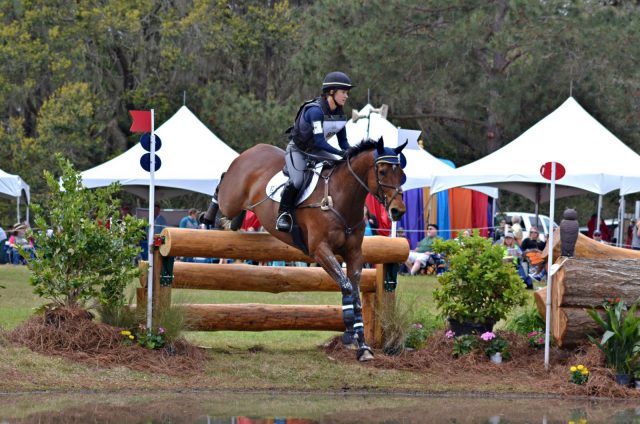 Only one pair in the CIC3* division made time around the 3,410 meter track, Whitney Mahloch and Military Mind (go OTTBs!), which boosted them into the top 10 from 25th after CIC3* show jumping. Jacob Fletcher and Atlantic Domino deserve an honorable mention, as they went round like bats out of hell and crossed the finish with only 2.4 time faults. They, too, enjoyed a nice hop up the CIC3* scoreboard, from a tie for 8th after show jumping into 2nd. 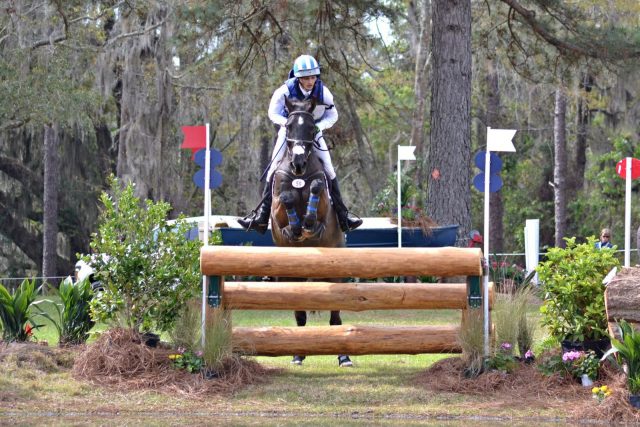 Jacob, an enterprising young man of refreshing honesty (never change, Jacob!), admitted that he and Domino have had “a blip” at almost every three-star they’ve been to, “So it’s great to get one under our belt.”

He undersells himself, tho — they’ve had some super results, including an Adequan Gold Cup Advanced Cup win at the 2015 AECs. And most recently he’s been named to the USEF Eventing 25 List, which garnered him the opportunity to train with Leslie Law. “It was great,” he says. “I found it hard riding in Arkansas alone trying to set stuff tough enough — I always set stuff too easy to make it feel nice, and then I go to the show and I’m like AGHHHHHH.” (It was more like a strangled cry, but I don’t know how to spell that!)

As for Domino’s fitness, Jacob says that he came off course feeling like he could have kept going. “I was worried about the fitness thing, watching Phillip and Boyd and Marilyn’s horses go past, and thought mine might be a little pudgy. But he was good!”

Jacob, at the tender age of 23, is a beautiful, bright, shining star of eventing and exemplary example of whatever follows this terrible millennial generation. In addition to horses, Jacob works in an office selling insurance. I’ll never forget asking him at the 2015 AECs what he was going to spend his oversized-check prize money on, dropping a subtle strip club suggestion hint, and he was like, “I’m going to invest it.” And I was like, “WHUT!” Kids these days, I swear, they are coming for us all. 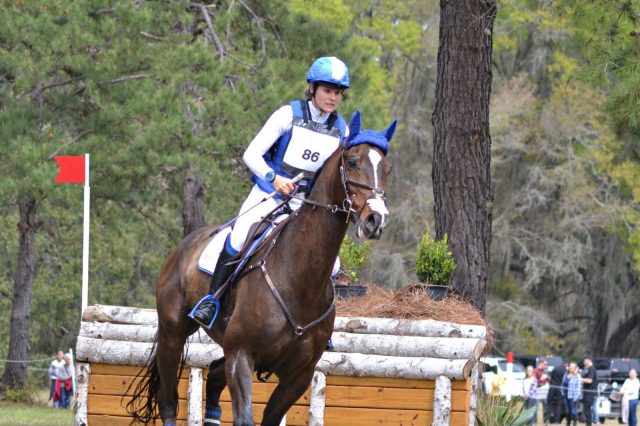 Next up, third-placed Jordan Lindstedt and RevitaVet Capito have been biting at the heels of victory so hard all weekend that the announcer today declared them “unofficial winner” of the CIC3* division REPEATEDLY! Check your facts, announcer! Nonetheless, they finished right up there, in 3rd, after bouncing from 2nd to 5th to, ultimately, the pen-penultimate spot.

“Capato was great all the way around,” Jordan says. “She’s just a great cross county horse, so it was really fun and great all the way around.” Exclamation point! Jordan says it took a few fences to get their groove going, which wasn’t common, but that once things clicked everything came easy. “He was pretty fast,” she says. “It just took a minute or two to settle in.”

Capato has a monster stride, and Jordan says that now it’s just a matter of making it as smooth as she can and figuring out where she can leave out strides. This pair is on the fence with regard to Kentucky vs. Badminton, and their performance at Red Hills is more proof that they could go either way, really! 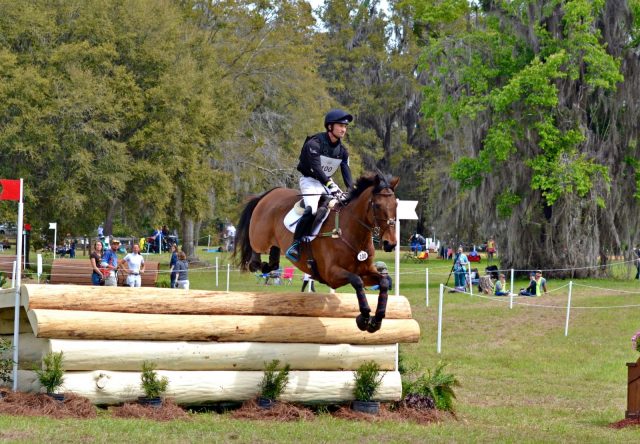 In the Advanced, Waylon Roberts and Kelecyn Cognac lead the division after cross country! They left the startbox on a tie for first with Phillip Dutton and Fernhill Singapore, but here again time was a game-changer. Waylon’s 10.8 time faults were good enough to keep him at the top of the leaderboard, while Phillip’s 20.8 penalties dropped him to 4th.

Waylon and Kelecyn Cognac have been a partnership for about four years now. “The butterflies are a little different than if you’re on one you’re not entirely sure what’s going to happen,” Waylon says. “I guess it’s more about about trying to go out and give him a really good run that’s going to prep him for a big three-day that you’re looking to get to. So that’s what was going through my mind today … It’s just getting out and getting to bigger jumps and making sure your eye’s still queued in and making sure that you’re both clicking in the right direction.”

Jessica Phoenix and Bogue Sound made a big jump up the leaderboard from 11th after dressage to 2nd, collecting only 6.8 time faults and posting the fastest time in the Advanced division.

“He was really good. He’s just a really fun jumping horse, and so genuine and so smart,” Jessica says. “It was just so fun to get out of that start box and gallop around on him. He’s so efficient covering ground that you never really feel like you’re kicking, you just kind of cruise around. He’s really solid at the level, which is exciting.”

Boyd Martin and Kyra had 12.8 time to round out the top three. The mare just moved up to Advanced at Pine Top a couple weeks ago, but Boyd describes her as “by far the most spectacular jumper I have in my barn.”

“She came to me about two years ago,” he says. “She’s very careful and today was by far her biggest test. She’s very sharp, a great jumper, and almost a bit too careful, but today she really gave me a cracking round around the cross country.”

The course rode well with a few problems scattered throughout. In addition to Clip Clop, a couple other horses ran into trouble at the #10A rails into the first water complex. Shelby Brost and Crimson had a stop which required a frangible repair, were sticky but successful on second attempt but chose to retire after clearing #10B. Nilson Moreira da Silva and Muggle retired after a stop there as well.

Elsewhere on the CIC3* course, Jessica Phoenix and Bentley’s Best picked up 20 after a green moment at the #12AB log to corner, but the horse looked super elsewhere and Jessie says she couldn’t be prouder. Jennie Jarnstrom and Penelope retired after a stop at #5, a fairly straightforward table; and Forrest el-Effendi fell from Winter Colony at #18AB, an angled hedge over a ditch to hedge skinny. The #18 combination caused three refusals and an early walk back to the barn for Lindsay Beer and El Paso in the Advanced as well, a shame as Lindsay was sitting 3rd after dressage. Also in the Advanced, Tayler Stewart came a bit unstuck from Ideal Contini when he scraped over fence #3, and after trying very hard to recover she unfortunately fell a few strides upon landing. 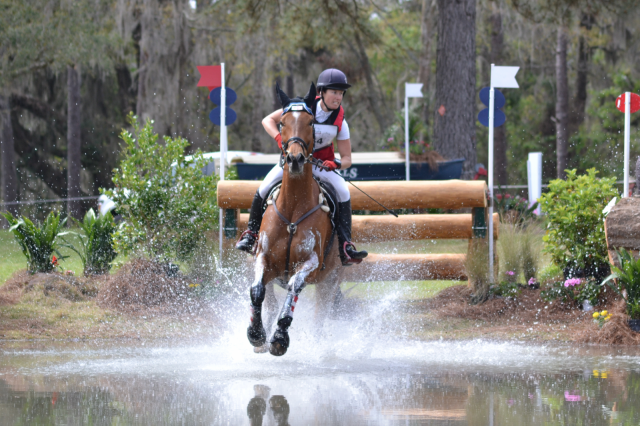 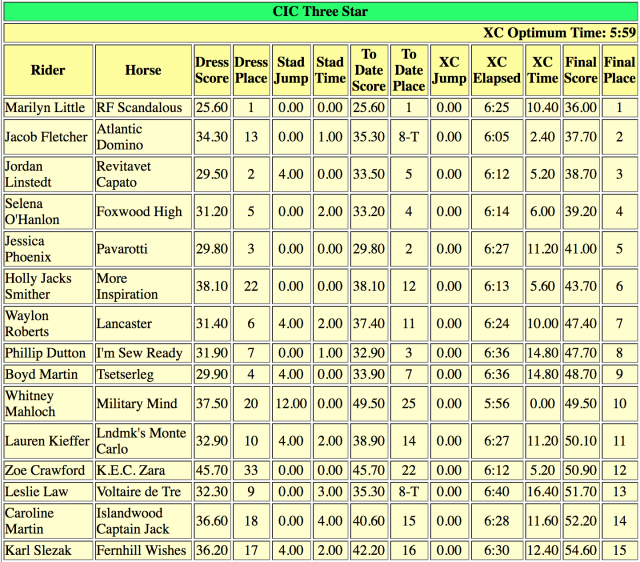 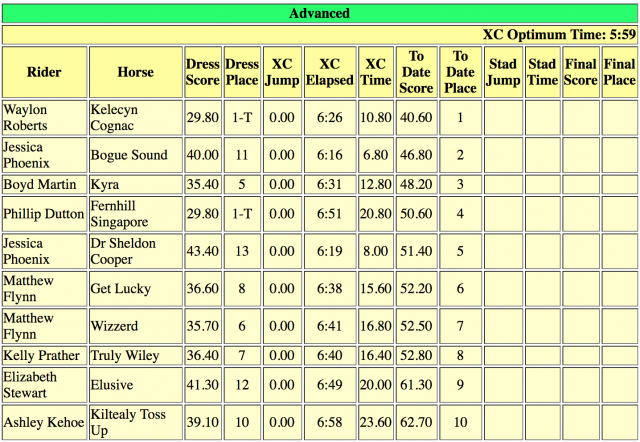