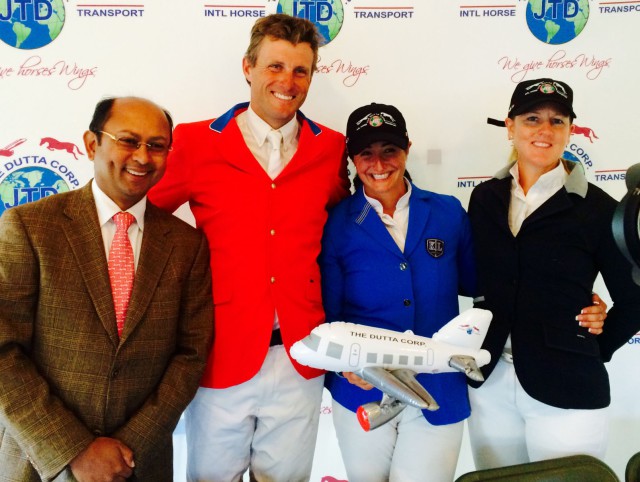 When asked how it felt to win the Dutta Corp Fair Hill International CCI3*, Jennie Brannigan said she’s a bit overwhelmed by the achievement — an understandable reaction when you consider everything she’s been through in the past two years to get to this point.

By now most of you know the story of the rocky road Jennie and Cambalda have traveled to get here. After enjoying a wave of success when “Ping” started going Advanced, a string of bad luck reared its ugly head. It all started while attempting to complete their first CCI4* last year, when Ping slipped on pavement before dressage, ultimately forcing her to withdraw.

They re-routed to Luhmühlen, where they fell at the first water complex, thankfully unharmed sans wounded pride. Then their comeback story seemed all but written at Fair Hill last fall, when Jennie and Ping led after dressage only to pick up 20 at a corner combination in the main arena.

An emotional win for Jennie, Gardners

And their luck still didn’t turn, as they infamously missed a flag at Rolex this year when Ping locked on to the widest part of an open corner, picking up a technical elimination. Through it all, Jennie strengthened her resolve to bounce back. As Boyd Martin put it yesterday, she’s “gone beyond what normal people would do to get here.”

“When Ping first moved up to Advanced, he was on a bit of a hot streak, so I thought, ‘Alright, here we go,’” Jennie said. “But it’s been a couple years of some disappointments. At this point, I realize I was lucky as a Young Rider to have the horses I did.

“I realize that this is a heartbreaking sport, and everyone has to pay their dues,” which Jennie understands all too well, especially when it comes to this event, as she clinched the win today in the same arena where her beloved partner Cooper suffered the injury that ultimately claimed his life: “It’s an emotional place for me.”

And it’s made even more emotional by the fact that she secured a win today for her longtime owners and supporters Tim and Nina Gardner. “They’re unbelievable,” Jennie said. “When the horse fell on the pavement last year at Rolex, they spent the money out of their own pocket to take me to Luhmühlen … and then I messed up and fell in the water.

“These people could have given the horse to someone like Phillip (Dutton), but they said, ‘It’s going to be fine. We want to support you, not just one horse.’ They’re that kind of people. …  I can definitely say I wouldn’t be anywhere without them. They really like the whole journey.”

What’s next for Master Frisky?

Boyd Martin has paved a similar windy path to the top with Master Frisky, who pulled one rail today to finish second in his first CCI3*, and he said he owes a lot to the horse’s owner, Steve Blauner, who is involved in a number of the syndicates for his top horses.

“I’ve very pleased because I asked him to buy this horse a couple years ago, and then he got hurt and didn’t work out that well, and then he came here and did this,” Boyd said, noting he’s already thinking ahead with what’s next for “Mikey.”

“He’s young and green, and this was his first time at the three-star level, and I don’t think he looked out of place here,” Boyd said. “The fastest way is to go slow with him, keep chipping away … I think he could be a really good horse.”

Boyd said he’ll run the horse in a couple Advanced horse trials next year and then make the decision as to whether he’s going to Rolex or another three-star. “He handles the cross country well, which is a factor that makes you take him or not take him to Rolex, and he’s pretty brave,” Boyd said. “In the back of your mind, you start thinking about the Olympics in a couple of years.”

Allison Springer getting better with age

Allison Springer is also looking to the future with Copycat Chloe, as she said both she and the mare are continuing to grow and develop as competitors. “This summer I talked to Kevin Keane about how to get a warmblood horse fit — she’s Trakehner/Thoroughbred — so I stuck to his plan and got a heart rate monitor,” she said.

Thanks to Kevin’s fitness advice, Allison said she felt confident Chloe was fit enough to tackle the course, and she stormed around just one second over the optimum time. “About halfway she slowed down,” Allison said. “In the past, I would have thought she was tired, but I said, ‘Come on, Momma, you keep going,’ and she did.”

Allison said she would rate cross country as her weakest phase, but that she’s working on it and slowly improving. “I guess you get better with age,” she said, having just celebrated her birthday on Friday. “Phillip has really helped me a lot. I know I had a mistake at Burghley on Arthur, but I really felt like that was such a good, forward riding round for me, and I learned a lot from that.”

Chloe can be a quirky horse — much like Arthur — and Allison said their partnership is still developing, but she’s pleased with the progress they’ve made. “I can’t say that our relationship is perfect yet; there’s always so much more to improve,” she said.

“I was thrilled, especially yesterday with cross country. I really felt coming into this that I knew in my heart she was fit enough. … It was me having the confidence that she could do that. I’ve certainly learned more about confident, forward riding.”

Tim Dutta, whose company Dutta Corporation will serve as the title sponsor of the event for at least six more years under the current contract, said he has big plans for Fair Hill, like improvements to stabling, more parties and entertainment, and increased prize money.

When Boyd said he wanted to see 100,000 people show up on Saturday — leaving “drunk bodies on the cross country course” — Tim seemed pretty supportive of the idea. Fair Hill should be to the U.S. what Boekelo is to Holland, a rousing celebration of the sport that attracts people far and wide.

The Dutta Corp’s slogan says, “We give horses wings,” but it’s clear the company has also given Fair Hill wings. There are great things ahead for Fair Hill thanks to Tim, and we have to extend our genuine thanks to him for supporting our sport. Go Eventing.