The team here at EN was deeply saddened to learn of beloved eventer Kim Meier’s passing earlier this month. We were honored to make Kim’s acquaintance and were lucky that she shared some of her countless stories with us. We’ll be sharing some of these stories this week in tribute. Do you have a memory or story about Kim to share? Please send it to us at [email protected].

This story first appeared on Eventing Nation on April 6, 2016. 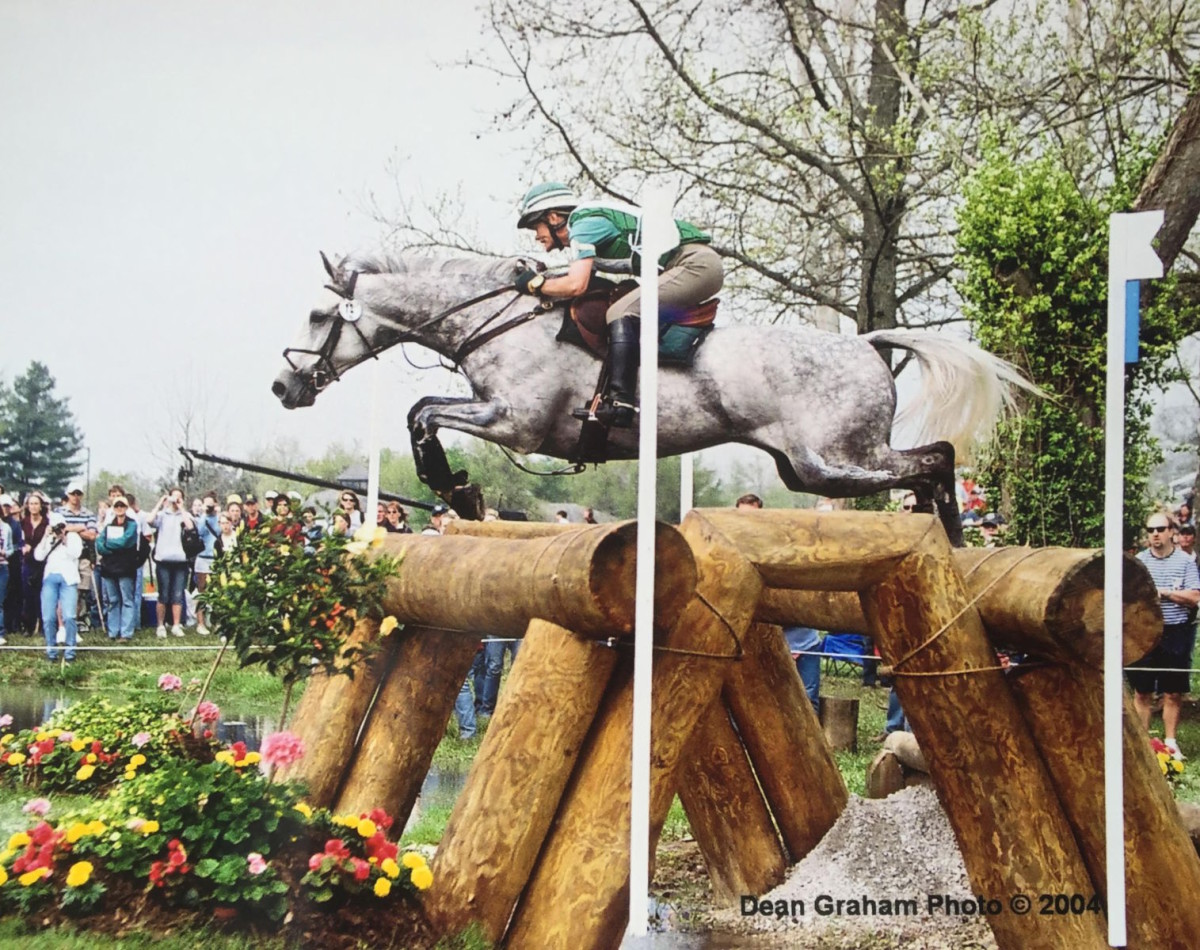 Kim Meier and Test Run at Rolex in 2004. Photo used with permission from Dean Graham.

Tall, gray and handsome, Test Run had a banner year in 2004 when he was nine years old. “Merle” had placed 10th at Rolex Kentucky and completed Burghley. He fit that cliché of young and strong with a brilliant future ahead of him. He was easily my horse of a lifetime, especially because I bred him.

I was 45 years old and had spent my life working and breeding to reach this point. I figured we would both retire when I was 50 and he was 14. The big dream was to do Badminton to complete the classic big three. And there was no reason to think we couldn’t do it.

That was a long drive back from Florida to Maryland. There would be no Kentucky 2005, no second Burghley. I set my sights on fundraising for Badminton 2006. But I was stupid and believed a veterinarian because I wanted to, and I ran an event in the fall, re-injuring the tendon and ruining the plans for 2006.

How could things be any worse? Well, I’ll tell you how. Just after the new year I took in another unbroken race baby. I already had two from this same trainer. She had come from Florida to Pimlico to me. The trainer told me to turn her out with the other two fillies, and so I did.

A couple of weeks later he called to tell me that the barn she had spent the night in at Pimlico now had a case of EHV-1. Probably nothing would come of it, he said. But maybe I should start taking temperatures.

There was a horse due to be vetted for sale that day, and sure enough she had a temperature. We went around and checked everyone on the property, and there were no other temperatures except the three race fillies. Although they were turnouts, I put them in an unused barn for quarantine.

The worry was on.

Over the course of the next six weeks, I was in a whirlwind of hell. Twenty some horses on the farm and only me to take care of them. Half turnouts, half stabled. Temperatures taken twice daily, crushing various medications, quarantine, no riding, intravenous DMSO, two horrible deaths, two more with high temps — and they were all full siblings, my homebreds, my babies. And Merle was one of them.

It was maybe four in the morning. I don’t think I slept more than three hours a day at this point. I got up and marched out through the barn and straight to the indoor where Merle was. After we had to drag the first one out of the stall after … you know … they went in the indoor when they had high temps. I flipped on the lights and peered through the purple glow of the mercury vapors. He was laying down. Question was, could he get up, or would it go to his brain?

I knelt down by his head, rubbed his little ears, kissed him on the poll. I slipped the halter on, stepped back and tugged gently on the shank. Slowly he brought his forelegs up in front of him and I pulled a little again. “Come on buddy, you’ve got to try,” I begged.

He tried to push off with a hind leg that was under his body, and rose a little, only to fall back. We tried again, and again, until finally he was teetering and I was hanging on to the halter, leaning back to try to balance him, and then he was up staggering backwards, toward the wall. If he hit that wall and fell down and got cast …

Then all of a sudden the hind legs caught his weight. He stopped and I stopped pulling, and we stared at each other, hoping the worst was over.

It was. He was the last one to fever, and in a few weeks the quarantine was lifted and we all began hacking out. I did three Intermediates that year in the summer and fall, planning my big comeback at Rolex in 2007. We did one Intermediate, and that next Tuesday I was doing a jumping school when IT happened.

On the way to a vertical he stepped on his bell boot when he should have been leaving the ground, went down on his knees and took down the top rail with his head. At the same time, I slid down his neck and caught the rail on the base of my head. I was paralyzed.

Needless to say we weren’t at Rolex, but a year later I did ride him again, with someone behind me holding my limp body up. He didn’t care if we were galloping down to the Head of the Lake or if we just walked around the indoor for 15 minutes. He was always there for me, and this time he came back to help me feel alive again.