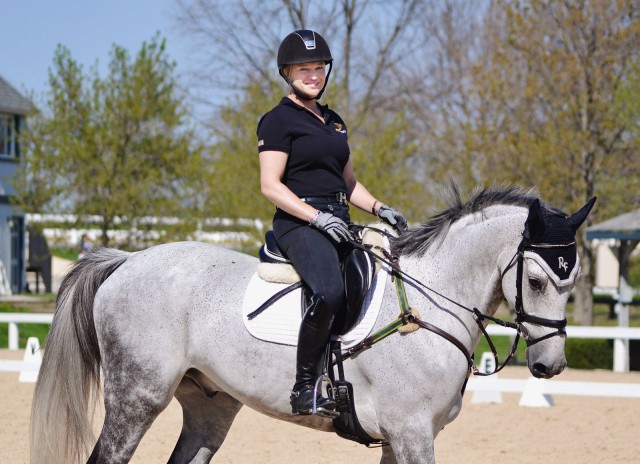 Marilyn Little and RF Smoke on the Water during Rolex week. Photo by Jenni Autry.

Marilyn Little has just announced on her facebook page that her fantastic Rolex partner, RF Smoke On The Water, had to be put down following a severe injury after being cast in his stall. Smoke, owned by Raylyn Farms and Phoebe and Michael Manders, had a brilliant weekend at his first four-star, finishing in fifth on his dressage score, and it seemed he was destined for great things. We offer our sincerest condolences to Marilyn and her team during this time. It is so heartbreaking to lose such a special, talented horse far too early.

“It is with incredible difficulty that I relate news of the tragic passing of my cherished partner RF Smoke on the Water.

“Along with four other RF Eventers including his close stablemate RF Demeter, “Smoke” had just returned to our summer base at Raylyn Farms in Maryland to begin a well deserved holiday following a brilliant weekend at Rolex, where he produced two double clear performances in cross country and show jumping. Two days after his arrival, during a late-morning habitual roll in the new bedding that had just been placed in his stall before he went out for the day, Smoke became cast against the wall and was struggling.

“Though Raylyn staff and his longtime caretaker Emily Dufort were immediately in his stall to assist Smoke in righting himself, it became clear that Smoke had sustained an injury during his struggle. At the recommendation of Dr. Richard Forfa who was quickly on the scene at Raylyn to evaluate Smoke’s condition, an emergency equine rescue service was contacted to transport Smoke to The Marion duPont Scott Equine Medical Center, where he has since been under the care of Dr. Martin Furr and his team.

“Based on examinations, imaging, system chemistry panels and consultations with other veterinarians, Dr. Furr suggests that Smoke had sustained undefined traumatic injury to his central nervous system while he was cast, possibly due to damage to the cervical or lumbar spine sustained during the ordeal.

“For me, Smoke was the most elegant of partners, a loyal teammate, and a truly wonderful friend. For others, he was a magnetic presence that you sensed was sure of himself in every way; his charismatic persona, can-do attitude, super-sized talent, thorough self confidence, prankster character, and acute awareness of his own stunningly good looks couldn’t help but make you smile.

“Whether he was mischievously kicking up his heels in a dressage test, attacking cross country (his favorite pastime) at age 7 with the skill and wisdom of a 12 year old, or making light work of the show jumping phase in his debut 4*, Smoke squeezed every ounce of fun out of every day and put everything he had into every moment.

“Though I am so thankful for the time that I had with him and feel so blessed to have been a part of his journey, I am stunned by his sudden loss, and devastated for the many people surrounding him whose hearts he had captured.”