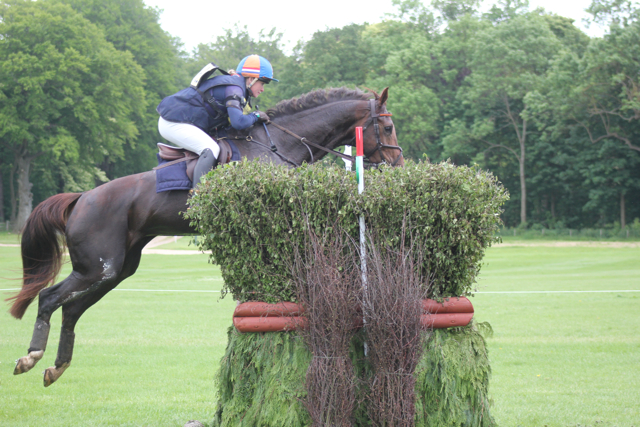 The first 2014 FEI Eventing World Cup event has wrapped up at Fontainebleau, France.  American Liz Halliday-Sharp rode both her top horses, Fernhill By Night and HHS Cooley.  Unfortunately both horses picked up 20 penalties on cross-country, moving her far down the results list after promising dressage scores.  Better luck next time, Liz!

The CICO3* division was won in thrilling fashion by Elaine Pen (NED) and her Dutch chestnut mare, Vira.  Elaine just barely beat out Italy’s Vittoria Panizzon and the fabulous gray mare Borough Pennyz; while leading after dressage, Vittoria was three seconds slow on cross-country to tie with Elaine. Elaine was only one second over the optimum time, breaking the tie to take home the win (and 3800€). Home country France took six of the top ten placings.  [Results – PDF]

I do have a question, though– why is it that Fontainebleau gets to run its CIC in the traditional dressage, cross-country, then show jumping format; while other CICs are forced to run show jumping first and cross-country last?  Why did the FEI have to make this schedule change, when it seems it should be left up to the individual event organizers; and what makes Fontainebleau special enough to run the standard format?