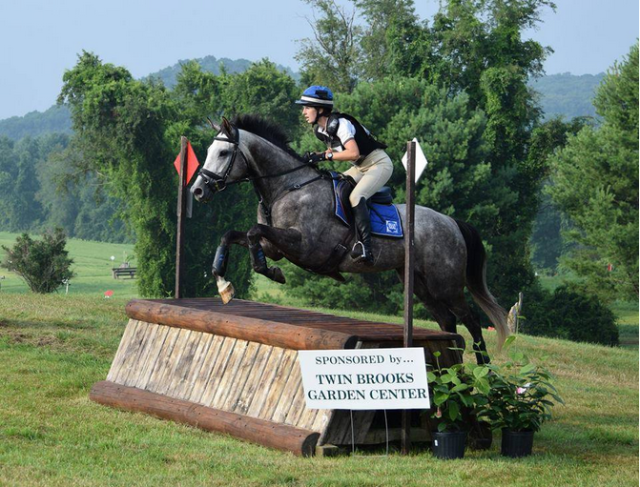 Me and Deszi at Millbrook.

Though I am always excited to compete at Huntington Farm, this event held particular significance: Garth was returning to competition. After months of slow and calculated rehabilitation, progressive treatments, and teetering on the edge of heartbreak, Garth was given the gold star for a return to galloping and jumping. Deszi also got to play. Two horses, one day – why not? They both ran at the Training level.

Deszi’s times were first. She showed slight signs of worry, chewing the bit continuously in the dressage, but aside from that she handled leaving her barn-mate beautifully. She has a phenomenal work ethic – focused, clear, and positive. She is an absolute pleasure.

She put in a lovely test with moment of improvement, and reminders of where we need to strengthen our performance. For our particular dynamic, I need to ride our test stride-for-stride, not movement to movement, and not the test as a greater whole. She placed second with a score of 28.6.

Cross country was fluid, simple and without concern. She is a star. Deszi cruised around the new track like she was warming up for something later. We incurred a little time due to adjustment to fences, looking for a deeper, powerful distance to the jumps. Her canter is so fluid and comfortable, I become lackadaisical – she calms me, and I need to keep engaging her engine stride for stride (same story in dressage).

In stadium, I rode a lovely line over the first fence. It was the wrong line, but a lovely line none the less. We slipped between a pair of standards and the bank complex, crossed our line, and continued our way around course. We pulled a rail from being slightly crooked at take-off, ending in 4th place. A true reflection of Deszi’s character, she stood quietly as Garth left the start box and executed his show jump round. It’s a pleasure to have two intelligent horses that can compete together.

Garth was surprisingly focused and submissive in the dressage. We incorporated a great deal of lateral work to keep him supple and to prevent him from overpowering me: shoulder-fore, shoulder-in, leg yield in all three gates. His counter canter was balanced, and his rein- ack is steadily improving.

During his test, it became clear that Garth was happy to be back competing. He whinnied three times, just to be certain everyone knew he was back.nHe won by nearly four points, earning a 26.7. Cross-country was like reliving his 4 year old season: the jumps didn’t concern him, but the rocks, trees, shadows, suspicious chipmunks and fence judge really caught his attention.

Several times, I found us suddenly on the other side of the gallop track. It’s impressive how quickly he can move laterally at a gallop. He jumped double clear. Stadium was lovely – forward, responsive, powerful springs off the ground – until the final fence. At the last jump, we had a communication error and slipping. I saw a stronger stride, he saw one more stride – he fit it in, then his hind end slipped nearly underneath the jump at take-off, landing his front end between the oxer’s top rails. We recovered, reared, and jumped it clear to win his division. I should have reacted faster to the distance I saw – a split second can make a world of difference.

Thank you to Bit of Britain for your gift certificates and support of Huntington Farm!

A very special thank you to Roger (super hubby) and Melissa Menard. Melissa, a lovely young rider whom I met through teaching the Groton Pony Club, offered to come help us for the day. Like Roger, she has a steady calm about her. She is mature for her age, a pleasure to be around, and is very good with the horses. Like Roger, I knew I could trust her. With cross-country and stadium rides within 20 minutes of each other, I could not have done it without them!

Thank you for riding alongside us!