Marianne van Pelt attended cross country day at Haras du Pin this past weekend and felt compelled to share her experiences with EN. We thoroughly enjoyed reading her perspective and would like to thank her for taking the time to send in her submission. 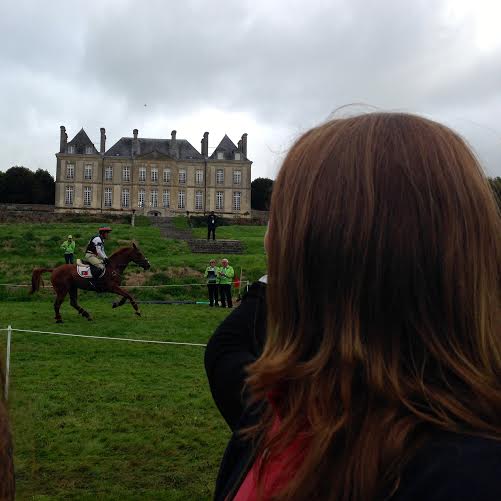 It would be an exaggeration to say I went to the World Equestrian Games in Normandy out of spite, but I did get on that plane to Paris with the firm intention to prove someone wrong.

It all started ten years ago. I came to eventing late in life, after I brought an Irish Sport Horse home in my suitcase from a holiday at Castle Leslie in County Monaghan. The movie star Jack Lemmon once told an actor friend of mine to wait until Hollywood came looking for him, and my little horse and I didn’t have to wait long until eventing knocked on our door. That traditionally-bred grey was a cross-country superhero, and everyone wanted his autograph.

As we made our way round New England, learning about our new sport, Badminton loomed into my consciousness – it was something American eventers spoke of in hushed, reverent tones. Badminton became a mecca: a shining inspirational beacon of horsemanship, country elegance, and British good manners.

Flash-forward ten years, and that plucky Irish horse has turned my life upside down. I now live in Ireland, a lot closer to Badminton, and last spring I was about to finally get to Badminton with a true eventing insider and dear friend.

Not only had my friend and Badminton escort professionally trained and competed event horses himself, his grandmother’s horse is the only horse ever to have won both Little and Great Badminton (as well as team Gold in the Mexican Olympics), while his father competed at Badminton something like 22 times. His family home is within shouting distance of Badminton House, and he grew up toddling round the grounds.

If Badminton were a food, he’d have been raised on it. I had rhapsodic visions of tramping around the course in my Dubarry’s boots, cheering the Irish riders, then enjoying a champagne picnic out of the back of a vintage Land Rover, all the while listening to a sort of private Best Of Badminton.

“It’s much better to watch it on the television”, my friend said, as the event drew near.

I suggested to him that for me – an American – it might be more fun to go for real. “Okay”, he sighed. “But all those dreadful of people.” He shuddered. “I’ll bring the paper and wait in the car.”

On the Saturday we were to go, it was raining. It was cold. I had flu. There was epic mud.

This struck me as far-fetched, but what could I do but graciously acquiesce, clutching my mug of tea, sniffling and coughing, while we watched it on the television.

“Take it from me”, my friend said, lighting the fire and settling into his favourite armchair, a glass of red wine to his right and a gently snoring terrier to his left.

“It’s much better to watch it this way.” 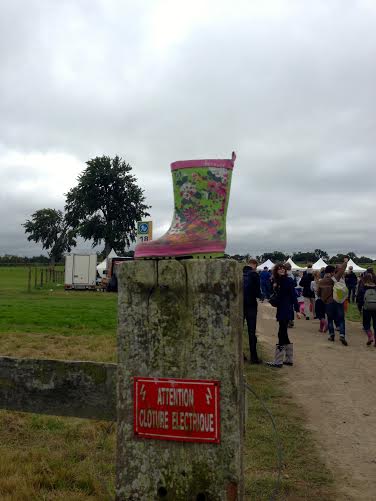 Someone was likely missing this boot terribly!

As anyone in eventing knows, the cross-country of Badminton 2014 was despotic, and many riders and horses lost heart or came to grief in the heavy sodden footing of the long, technical course. I sat under a woollen rug, watching, envying the shivering spectators, rain dripping from their waxed hats, witnesses to that bit of eventing history.

When the time came to book flights to Paris for the World Equestrian Games in Normandy, I asked my Badminton friend.

“Oh no, darling”, he drawled. “You don’t want to go to something like that. That will be a nightmare. Take it from me.”

What rubbish, I thought. I love Normandy. I love eventing. I loved WEG 2010. I’ll show him.

I booked tickets and made plans with a tough, wily Manhattan lawyer friend with whom I’d evented in New York. If anyone could get me to the base of the fences at Haras du Pin, I knew it would be this girl. She wasn’t going to be put off by a bit of mud.

We decided to skip the eventing dressage and just rock up for the cross-country on Saturday. Without Wi-Fi or Twitter at our rented beach house, we were blissfully unaware of the drama unfolding from the pre-dawn hours on the country lanes round Haras du Pin as 50,000 people tried to claw their way to the venue. Knowing the first horse was to go at 10:30, we had a leisurely breakfast and set off at about 9 am for the hour-plus drive. Easy peasy.

We put the top down on the convertible and breezed up the peage, getting off onto one of the pastoral roads signposted for Haras du Pin. In short order, we hit gridlock. No problem. We swung round, got back on the motorway and dropped down to come at it from the south. We got off into more idyllic French countryside, flying through creamy stone villages, bursting with flowers, until the road divided. Spectateurs to the left, said an imposing yellow sign. Officials to the right, said another. A gendarmerie with a magnificent moustache waved us left.

“No way”, my New Yorker spat under her breath. “He can forget it. Tell him we’re going right.”

I rolled down the window, attempted to bat my eyes, and pointed right.

“We have to visit my sick grandmother this way”, my friend said – or something along these lines – in French. She pointed at the map.

“We must go this way”, she said, in French, banging on the map in her lap.

He shrugged – his heart just wasn’t in it – and waved us through.

And so it went on. We came to the next road, blockaded by a knot of burly policemen.

“Keep going”, my friend said. “There’s a smaller road.” Which we shortly came to.

This one was guarded by a single frail volunteer, leaning into another car, deep in conversation. “Go, go go!” my friend shouted, above the wind, and so we flew past him and straight into the venue, without waiting at all. We parked up, slid through a back gate and onto the course as the first horse was coming up to Le Hamel, Fence Seven.

We had no idea how exceptional this experience was.

“Oh, it’s so muddy”, I said, making a face, as we sauntered down the hill toward the trade stands, looking for a bathroom. It wasn’t just ordinary mud; it was clay that sucked and clawed at you, that caked round the heels of your boots, wearing you down. It was heavy going. The horses galloping past; even the best ones like Paulank Brockagh – who won Badminton 2014 with Sam Griffiths – and Horseware Bushman – who won Camphire 2014 with Sam Watson – looked knackered. We felt knackered.

And then there were a series of now well-publicised inconveniences: long queues for the toilets, which were only sawdust-filled holes with seats anyway.

Long queues for the most vile sandwiches I have ever tasted. No place to sit, no place to shop, hardly any place to see the horses going round, no idea what was happening at all.

In the afternoon, it began to get seriously crowded as the poor souls who’d been stuck in traffic finally arrived. The ground became a shallow black sea of muck.

It took thirty minutes to get through the gap between Le Lavoir (Fence Three) and La Cour Colbert (Fence Four), and the volunteers in WEG green had to hold hands to manage the flow of the crowd, as we were pressed and jostled, slipping in the mire. I had visions of being trampled like swine. It was nightmarish. 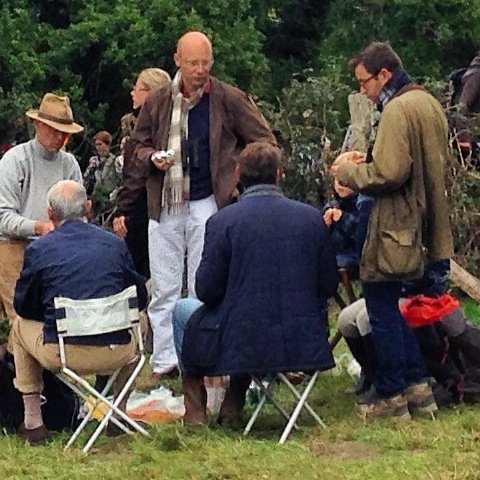 We met some Dutch journalists. They moaned; they had left on the 6:15 a.m. shuttle, only arriving at 11am. “At last”, they concluded, “there is a Championships worse than The Hague! No longer are we the worst!”

But the French were charming. The volunteers smiled and laughed, and the French fans, many with French flags painted on their cheeks and French flags worn like blankets over their shoulders, joked with them like family. At lunchtime, they broke out baguettes and rounds of Camembert, glasses of wine and thermoses of coffee, leaning elegantly against trees or perching on small light chairs, chatting insouciantly. Clearly French people do not set off on this sort of adventure without a crusty loaf, a creamy cheese, and a chilled bottle.

We saw Zara Philips giving her horse a grateful pat after a close call coming out of the Land Rover water complex. We admired Michael Jung’s composure and beautiful form. While my friend was tied up in the toilet queue, I watched William Fox-Pitt make quick work of the Land Rover water, his body motionless as Chili Morning bounded through the brush fences. We gasped as Camilla Speirs and Portersize Just A Jiff banked the third element in the Alltech water complex.

We caught sight of Boyd Martin checking his watch as he galloped up the final hill. My friend, who trains with him, cheered, “Go Boyd!”, and he smiled.

It started to drizzle. “Oh god”, my friend said. “Let’s get out of here.” There were only a five horses left to go anyway. “That was some day”, she said, as we wended our way home. “Who’s leading? I have no idea what happened. I can’t wait to watch it on television.”

The next day we did watch it all on television, a glass of rose in hand. The event looked great. It looked historic. We watched Boyd, the Irish, the Brits, the Germans running the course from start to finish. We saw it from above; we saw it from the side. We saw it all, in perfect comfort. It was better – a hell of a lot better – to watch it on the television.

Badminton 2.0, as the cross-country at Haras Du Pin WEG 2014 has been called, was a daring adventure for competitors. It was also a memorable, eventful day full of incident for spectators. And we were there. Who events – who falls in love with horses – to play it safe, to always be comfortable? Life is an adventure, or nothing. Roll on Burghley.