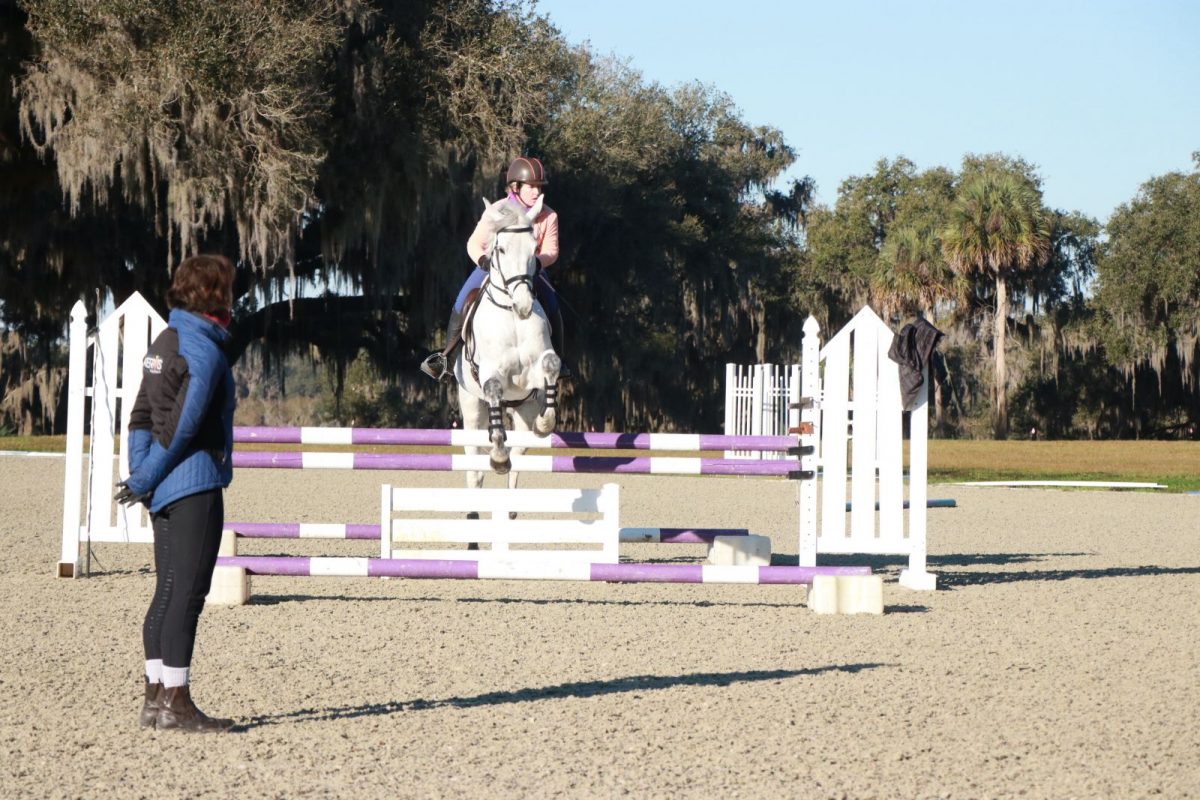 Spending a week in Florida last month lined up beautifully as my trip happened to align with a Bettina Hoy clinic at Mardanza Farms. I was headed south to do some freelance work, and Sharon White was gracious enough to host me – which meant I was front and center to learn from Bettina for the first part of the week.

Bettina Hoy certainly needs no introduction, but allow me to wax for just a bit. A three-time Olympian for Germany, Bettina made history in 2004 when she earned the gold medal as the first woman to top the podium in eventing. While some ill-timed controversy would sadly reverse this result, the fact remains that Bettina was the best that weekend and also has multiple other accolades adorning her name, including a European Championship gold, two WEG medals, and two five-star wins with her famous partner Ringwood Cockatoo.

Now spending her time primarily in the dressage ring and traveling the world as a coach, Bettina shares the wisdom she’s accumulated through her career, doing so in a delightfully engaging manner that somehow also makes you want to become her best friend.

For as much as we might expect a top-level clinician to get technical with their exercises, Bettina stayed refreshingly basic. She primarily taught a variety of professional riders – and one pro Western dressage rider! – on experienced horses, but the exercises remained similar across the board. 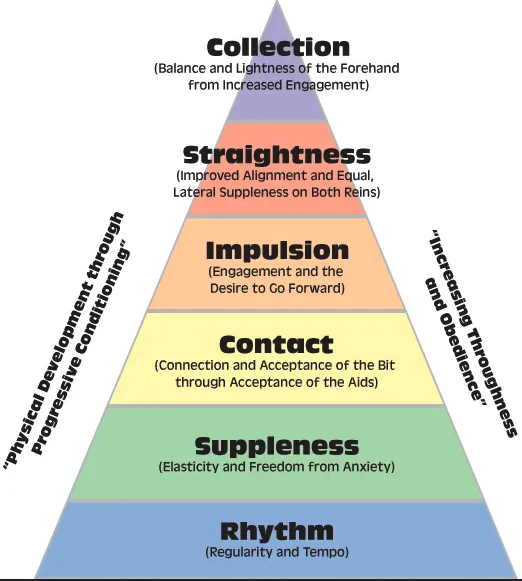 Resting at the core of Bettina’s riding and training philosophy is the dressage pyramid of training, a progressive system that creates a balanced and responsive athlete. Through this scale, a horse learns to properly understand the rider’s aids. This, Bettina says, is where everything starts. “A horse can only understand if the rider sits in balance,” she explained. Further, Bettina believes that issues rarely lie in the test movements themselves – rather, trouble in movements can be fixed by going back to the basics and foundation of the horse’s training (and understanding of aids).

Bettina preferred to teach riders on multiple days, with two days of flatwork and one day of jumping. This, she said, allowed her to see progression of both horse and rider – “they’ve had the night to think about everything!” she would laugh before day two’s lessons began – and make any additional adjustments to the concepts she’d taught the day before.

Every combination began over a series of pole questions. Bettina was insistent that each horse be responsive to the rider’s aids – right away – and this became a focal point for the majority of riders she saw. She wanted riders to show more leadership in the saddle. “By taking responsibility and taking charge, it actually helps the horse relax,” she explained. “And when they relax, they get supple and find the bit.”

Bettina worked with riders to supple their horses, getting them to move more from their hind ends and over their backs. Much of this suppling work involved, as Bettina put it, “placing the front end in a way so that the hind end can follow”. Stiffness, she noted, protects the body. Horses that are stiff and/or tense are holding on, and taking this tension down requires patience. She wanted horses to show more “body composure” or awareness of where their body was – many horses’ weaknesses were exposed during this work. 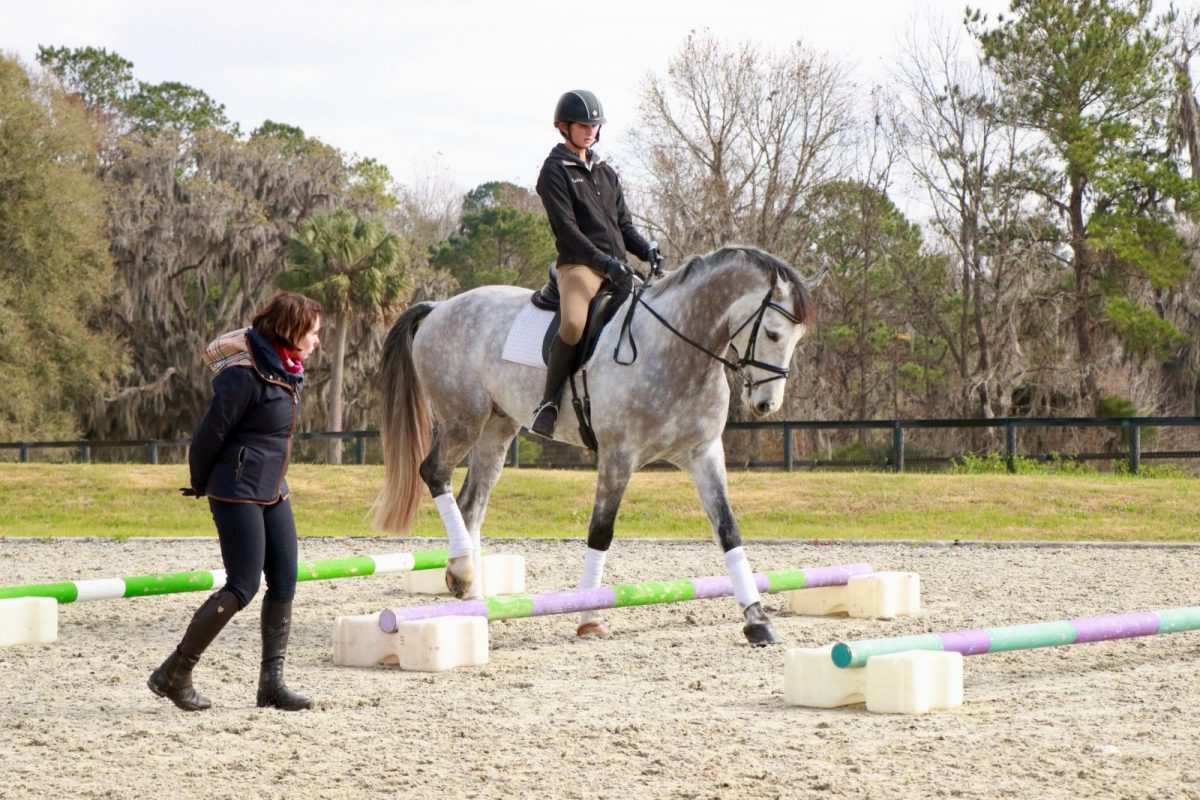 To help establish a greater sense of body awareness, Bettina slowed things down and had riders do a lot of work at the walk. “Set your ground rules at the walk,” she instructed. “There’s no point going faster until those ground rules are established.” What ground rules, exactly? Responsiveness to aids – does your horse yield to your leg immediately, or is there a delay? Do they respond to suppling and half-halts, or do they dig in and resist?

Just like us, horses are animals of habit. We can use this concept to our advantage in the saddle by establishing better habits and paying attention to details. This requires body awareness of our own, as well as a present mind to be able to feel what’s happening in the moment. “Feel, then act,” Bettina said often. “If you have to react, you are too late.”

On jumping day, once again the exercises stayed small and simple. Bettina worked with placement poles on either side of single verticals and oxers, stringing together small courses that focused more on efficiency of lines than speed or size. She also introduced angles, but only over poles, noting that this was a way to incorporate cross country lines into everyday work without adding stress on the horse’s legs.

“You can be faster without riding faster,” Bettina explained of the importance of choosing good lines. “This doesn’t take as much energy away from the horse. Ride better lines, and ride them at the walk. It’s possible to practice as long as the horse is in front of your leg.” 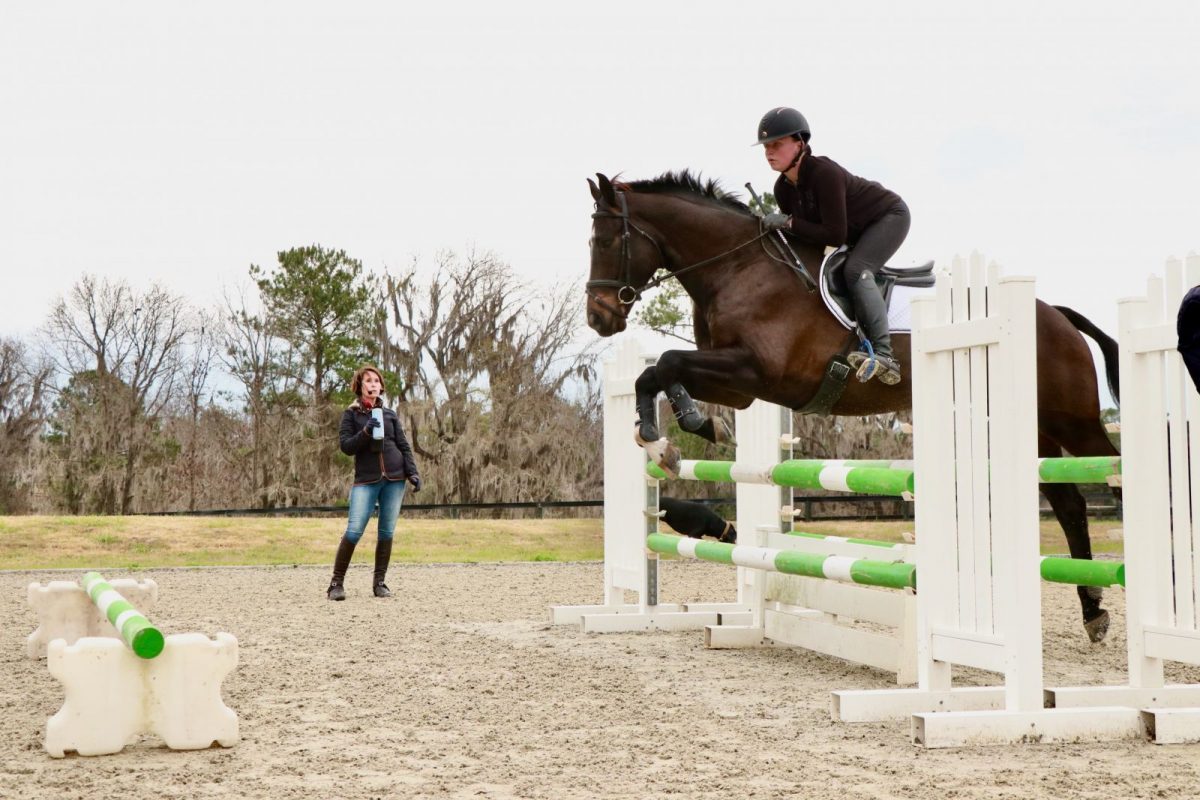 By the end of each ride, we saw higher quality gaits and better responsiveness (and delivery of) to aids. Bettina expects you to listen and execute, but her genuine excitement when the lightbulb clicks on is contagious. She mixed in tales from her adventures eventing around the world, life lessons learned, and enough jokes to keep us all laughing, and everyone seemed to come away with some valuable new tools.

And it’s not just tools for achieving better scores in the ring – Bettina emphasized that this work also helps horses stay stronger and sounder. A fitness buff herself, Bettina associates correct riding (remember that body composure she spoke often of – that applies to horse and rider!) with sound horses. “Correct riding is not just a means to get a better dressage score but also to keep the horse sound and healthy in whatever we ask them to do,” she explained. “Particularly when we are asking them to run and jump at speed.” 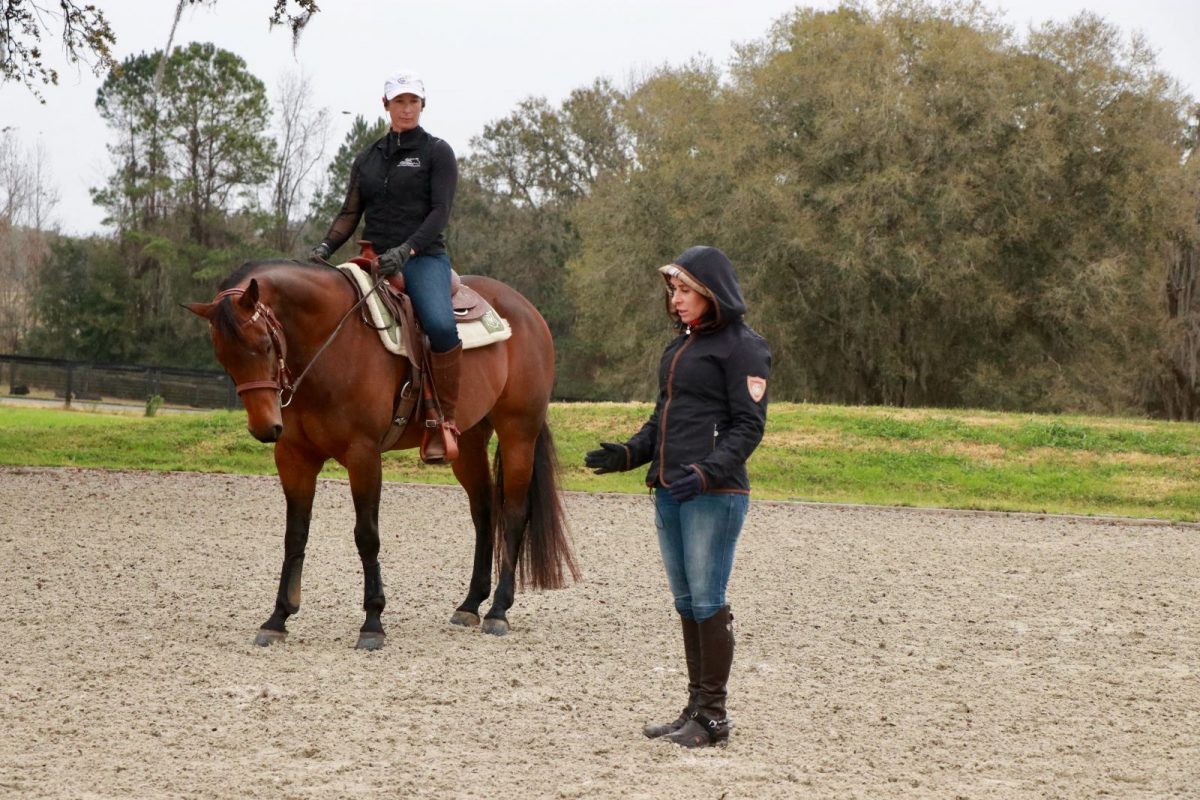 Training horses is a universal language. Photo by Sally Spickard.

A highlight of the week was watching Bettina teach Rachel Ory, a professional who competes in Western dressage and a variety of other disciplines. It was a wonderful experience to watch Bettina teach Rachel and her beautifully trained partner, Jagalicious, demonstrating that partnership with a horse is a universal language. “I have used dressage training as cross training and it has made her stronger and more balanced,” Rachel commented. “It has complemented her reining training from the start.”

Bettina capped off her week with a spin on one of Tom Pierson’s experienced reiners, and then it was off to Maryland for one more clinic before returning to Germany.

Always cool to learn something new in the saddle especially having 19 year old Casey teaching you how to do it!
Thank you Tom Pierson and Rachel Ory for giving me an insight in your work. Absolutely loved it Sharon White
Schockemöhle Sports breeches just looked the part 😊

Auditing a clinic is an invaluable experience, even if you aren’t actively riding. Bettina’s clinic would be one of my favorites on record, and should you ever find yourself with the chance to ride with her or audit a clinic, seize it!