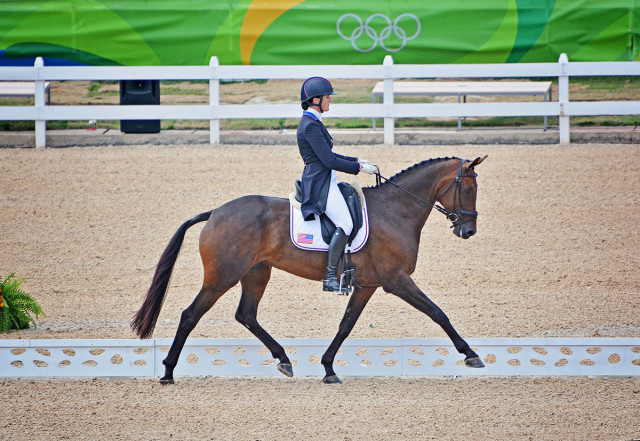 It’s been a bit of an anticlimactic morning here on the second day of dressage at the 2016 Olympic Games in Rio de Janeiro. While we’ve seen numerous dressage powerhouses enter the ring, none of them have really wowed the judges so far today, leaving the top three unchanged from day one.

William Fox-Pitt and Chilli Morning still lead on 37.0, with Chris Burton and Santano II in second on 37.6, and Michael Jung and Sam in third on 40.9. Three horses and riders have managed to crack the top 10 today, with France’s Thibaut Vallette and Qing du Briot the best of the morning session to sit fourth on 41.0.

Thibaut’s score boosted France to the top of the team standings, and the French now lead on 126.4. Germany sits second on 127.3, with Great Britain in third on 128.1. The U.S. team remains in seventh place after three of our four team riders. 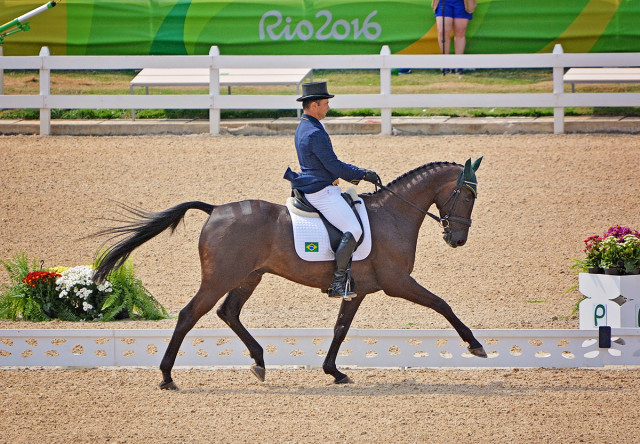 No one caught the top of the leaderboard this morning, but you would have thought Ruy Fonseca and Tom Bombadill did based on the roar from the Brazilian crowd! Photo by Jenni Autry.

Lauren Kieffer and Veronica scored 47.3 to tie for equal 25th place after their test. That’s the highest four-star score the 14-year-old Dutch mare owned by Team Rebecca has ever received in her career, and while we could nitpick over things like a missed change, I doubt I’m alone in thinking Lauren’s test was a bit harshly judged.

“She was really good. Her trot work was really nice; I thought probably some of her strongest trot work,” Lauren said. “It tends to be that the walk is her most difficult gait, and she actually was quite good through that. I was quite happy with the canter. I think she missed the one change, but we seemed to really get punished at the end, so I’m a bit disappointed with our score.”

But with Pierre Michelet’s cross country course expected to turn the leaderboard upside down tomorrow, Lauren said she’s not dwelling on the score. “I have a feeling by the end of tomorrow that today won’t matter much,” she said.

“It’s certainly a very strong track — one of the stronger tracks I’ve ever done. The footing is great, though; there’s lots of options if you’re having trouble to get home. But if you want to go for the win, you’re going to really have to take some risks, and it’s going to be tough out there.” 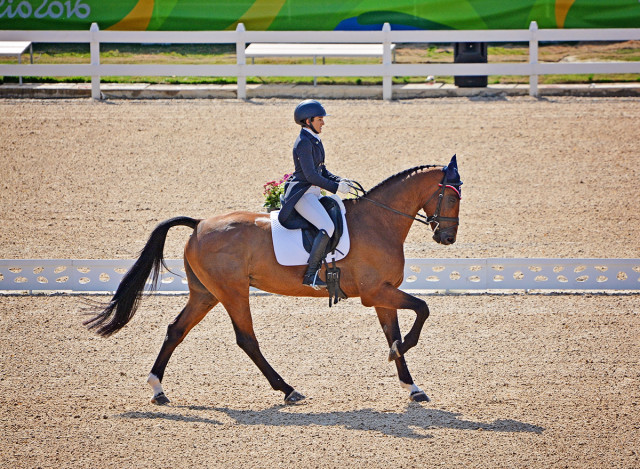 All three of our North American riders that have gone so far today are all ladies making their Olympic debuts, and Lauren Billys was beaming from ear-to-ear after her test with Castle Larchfield Purdy, a 14-year-old bay Irish Sport Horse gelding owned by the Purdy Syndicate.

Lauren, who is based in California but rides for Puerto Rico thanks to her grandmother’s Puerto Rican heritage, and “Purdy” scored 56.0 to sit in equal 39th.  “I felt like he answered every single question that was asked of him,” she said. “He just was the best he’d felt in a big ring. He was quiet and settled and handled every movement that I asked of him, so I was really happy with him.”

Lauren has had the ride on Purdy for about two years now, ever since she purchased him with a syndicate from Emma Castle in Great Britain. Since then Lauren and Purdy have developed their partnership from the two-star level through to the Olympic Games.

“He’s really cool. He’s willing. He’s fearless until he sees a turkey or some other obscure object, but the reason we bought him and the reason I felt comfortable buying him is I feel fearless when I ride him. When I ride him cross country, he just goes and he squeals at the sight of the start box. He loves eventing, so he’s a really special partner for me.”

Lauren is competing as an individual for Puerto Rico, and you can spot the flag just about everywhere you look thanks to the large support crew she has with her here in Rio. From Derek and Bea di Grazia to super groom Max Corcoran and her vet Emily Sandler to members of the Purdy Syndicate, Lauren is feeling the Puerto Rican love! 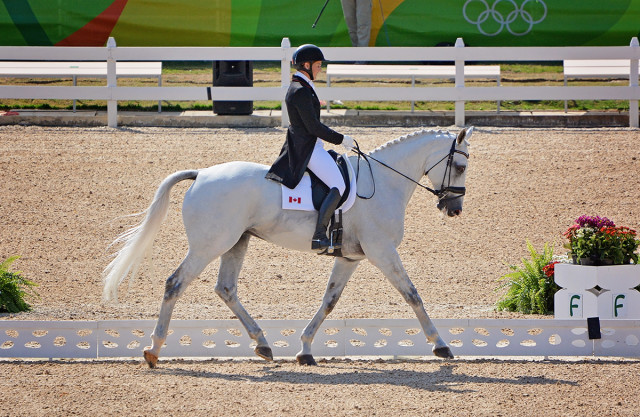 Colleen Loach and Qorry Blue d’Argouges sit in 41st for Canada on 56.5 after a test that unfortunately came unraveled right from the start when feedback from the sound system suddenly blared from the speakers just as they were starting the medium trot.

“Qorry,” a 12-year-old grey Selle Francais gelding owned by Peter Barry, spooked at the loud noise and broke to canter, and Colleen struggled to get him back. She recovered as best she could given the very ill-timed sound system malfunction.

“There was a huge microphone noise coming into the arena; that’s for sure (what spooked him). I don’t know why it happened; it was really unfortunate. He was so good coming in, relaxed, really clued in to me, and then just blew the whole movement,” she said.

“I just told myself to put it behind me and think about the next movement. He was good the rest of the test. I think we didn’t have quite the presence that we may have had without the mishap. … I’m just really disappointed that happened. But he was a good boy and it won’t be a dressage competition.”

Canada sits in 11th place on a team score of 157.9 after the third of their four team riders, with Rebecca Howard and Blithe Hill Farm’s Riddle Master still to come in the next group. Phillip Dutton and HND Group’s Mighty Nice are the final combination out for Team USA, the second to last to go today at 3:38 p.m. local time/2:38 p.m. EST.

Looking to other notable tests this morning, Jonty Evans and Cooley Rorkes Drift absolutely knocked it out of the park for Ireland, scoring 41.8 to sit in sixth place. That boosted the Irish team to fourth place on 135.6 with Mark Kyle and Jemilla still to come.

Pippa Funnell and Billy the Biz also had a lovely test for Team GB, scoring 43.9 for ninth place.

As we head into the afternoon session, who if anyone will challenge William Fox-Pitt at the top of the leaderboard? Click over to Maggie’s dressage powerhouses analysis to get the scoop on which horses and riders we’ll be watching closely. If you’re just tuning in to EN, be sure to check out our open thread from this morning, and don’t forget to follow along with our live tweets @eventingnation.