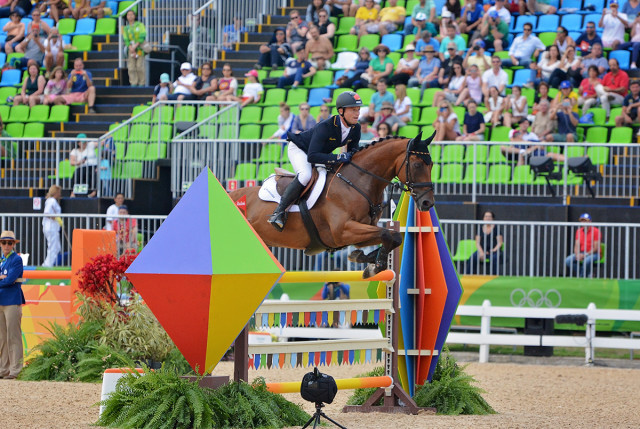 The team show jumping final this morning had us on the edge of our seats as the standings shifted with every fallen rail. Ultimately, France came out on top with their second ever Olympic team gold in eventing, Germany won silver and Australia took bronze. New Zealand finished fourth just over two rails away from the gold medal score. Relive the action on our live updates post here.

The top 25 return for a second round to determine individual placings. Their scores from the team cycle carry over to the individual final, which starts at 1:00 p.m. EST. Defending Olympic Champions Michael Jung and Sam FBW are now in the gold medal position individually on a 40.9, having jumped a masterful double clear during the first round. Breathing down their necks on a 42.0 are France’s Astier Nicolas and Piaf de B’Neville, who also jumped clear in the first round.

Christopher Burton and Santano II, the leaders after cross country, added two rails to their total which put them third on a 45.6. Our very own Phillip Dutton and Mighty Nice jumped clear with one time penalty and are knocking on the door in fourth on 47.8. Boyd Martin and Blackfoot Mystery are seventh after the first round on 48.9.

2:29 p.m. EST: Click here for final results. Stay tuned for a full report on the individual final. Meanwhile, grab a tissue and love this moment:

1:58 p.m. EST: Michael keeps making history. He and Sam are the only horse and rider combination to finish on their dressage score in the 2016 Rio Olympics, he won the Rolex Grand Slam and the Olympics in the same year, and is the third eventer ever to win consecutive Olympic titles and only the second to do it on the same horse.

1:53 p.m. EST: Astier Nicolas and Piaf de B’Neville get it all wrong at the big gray oxer. They take the fence with them and can afford only one more to stay in silver.

1:52 p.m. EST: Chris and Santano have 8 penalties. That drops him off the podium and GUARANTEES PHILLIP DUTTON BRONZE AT LEAST.

1:51 p.m. EST: Christopher Burton (AUS) and Santano II work for it through the triple. He had two down this morning and a clear will be critical. 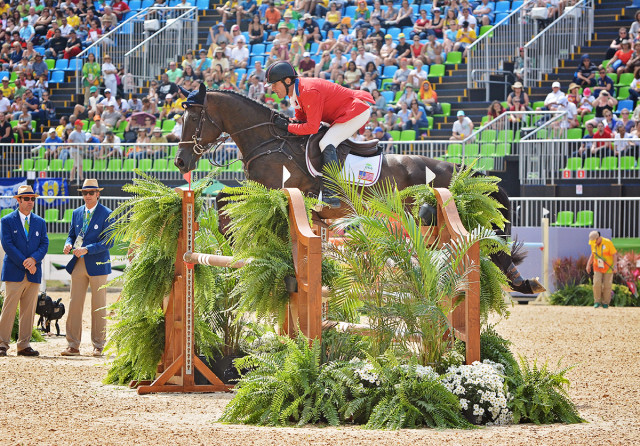 1:49 p.m. EST: One rail down for Phillip Dutton and Mighty Nice. That’s a final score of 51.8. They hold on to fourth place but widens the gap to the podium. But let’s say it again – Phillip can finish no worse than fourth!

1:48 p.m. EST: Phillip Dutton is in the ring with Mighty Nice. He needs another clear to give him a good chance at a medal.

1:47 p.m. EST: Clarke Johnston (NZL) and Balmoral Sensation have two down, uncharacteristic for this good show jumping horse, but they only drop down one placing, moving Sam Griffiths into the top five!

1:45 p.m. EST: Australia’s Sam Griffiths is over the moon! He and his Badminton winner Paulank Brockagh just produced their second double clear of the day and guaranteed themselves a top 6 finish at the Olympics.

1:43 p.m. EST: Boyd and “Red” had two rails this morning as a result of the horse being a bit tired and he’s added another 12 penalties here in the second round. That does move them well down the leaderboard but really a great performance for this relatively new partnership. This does guarantee a top ten finish for Canada’s Rebecca Howard and Riddle Master. 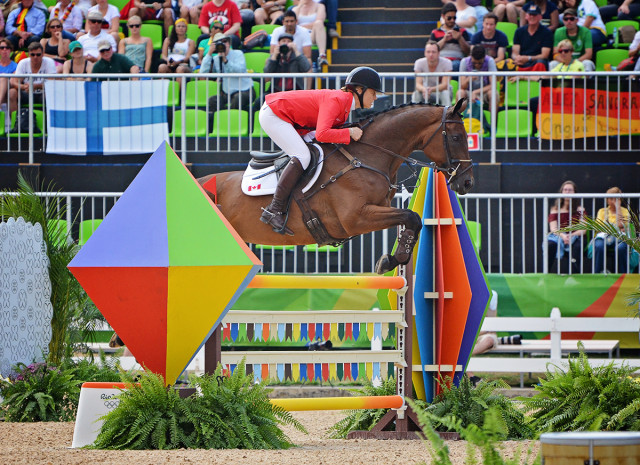 1:42 p.m. EST: Here we go with Boyd Martin and Blackfoot Mystery for the United States!

1:40 p.m. EST: An unlucky block off the blue wall for four penalties and a final score score of 63.6 and a top ten finish for China’s Alex Hua Tian and Don Geniro.

1:39 p.m. EST: Eight total penalty points in the individual round for Mathieu which drops him an unfortunate seven places. He’s still thrilled and smiles broadly at his fans.

1:38 p.m. EST: Mathieu Lemoine and Bart L dropped 2 rails in the first round and had France fighting for the finish. He needs a clear round to stay in the top ten, but he’s just dropped a rail at the new big gray oxer. Jonty Evans moves into the top ten for his first Olympics.

1:35 p.m. EST: Rebecca Howard and Riddle Master was double clear in the first round and have had a cracking competition all around. She’s Canada’s hope for a top ten individual finish.

1:34 p.m. EST: Redemption! Mark and Leonidas are double clear to finish on 62 penalties and will finish no worse than 11th.

1:33 p.m. EST: Mark Todd and Leonidas II had a heartbreaking four rails down for 16 added penalties in the first round which dashed New Zealand’s hopes for a team medal. We’re hoping it goes better for him this go around.

1:30 p.m. EST: Carlos Parro (BRA) and Summon Up the Blood had three down in the first round and sit just outside the top ten before the individual final.

1:29 p.m. EST: Jonty Evans just produced his second double clear round today for Ireland with Cooley Rorkes Drift. They finish on 64.6 and he is absolutely delighted!

1:27 p.m. EST: Thibaut Vallette for France with Qing Du Briot were double clear in the first round and had one down this time for a final score of 69.4. Sandra and WFP both move up a place.

HALE BOB – the first penalty by a German rider today. They are hoping its the last. #Rio2016

1:24 p.m. EST: Ingrid Klimke (GER) and Hale-Bob OLD were clear in the first round but they picked up four penalties here in the individual final. They finish on a 69.5. That will drop them two places and moves Sandra Auffarth and Opgun Luovo into 15th.

1:19 p.m. EST: Alright, Sandra Auffarth and Opgun Louvo for Germany, they were clear this morning, can they do it again?

1:17 p.m. EST: William Fox-Pitt and the stallion Chilli Morning produce their second clear round today. They’ve had a perfect show jumping tour at the Rio Olympics. They will finish 18th at least on a final score of 67.4.

1:13 p.m. EST: Japan’s Yoshiaki Oiwa and The Duke of Cavan had one rail in the first round and one more in this one for a final score of of 73.0. He’s guaranteed a finish in the top 20.

1:11 p.m. EST: Two rails down for Stuart Tinney and Pluto Mio from Australia. They have a final score of 84.6.

1:01 p.m. EST: Here we go! First of 25 riders in the individual final is Joris Vanspringel and Lully Des Aulnes of Beldium. They come into the ring on a 83.9. The course is a bit different and the time allowed is 63 seconds.