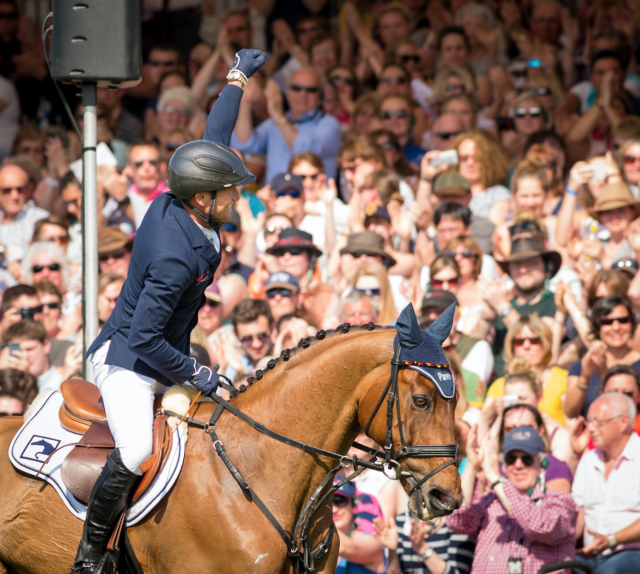 By the time event horses reach the Olympic level, they pretty much have the CCI format down: you do your dressage test, you run cross country, and if all systems are go you tackle a final show jumping round.

But, of course, the Olympic Games has to do things differently. There’s not just one but two show jumping rounds — round one determines team medals; round two, contested by the top 25 from round one, determines individual medals.

Imagine the surprise today’s Olympic equine competitors will experience after round one when, instead of being stuffed full of carrots and enjoying a nap at the barn, their grooms tack them back up and send them back out into in front of the crowd for round two.

This “encore performance” gives the Olympic individual medal competition a definite wild card factor, and has historically made for major shifts in the standings as some horses rise to the occasion and others run out of gas.

Here’s a glimpse of the difference an extra show jumping round can making, using the 2012 London Olympics as an example (the format was also used in the 2008 Beijing and 2004 Athens Games):

2012 standings after show jumping round one (team): 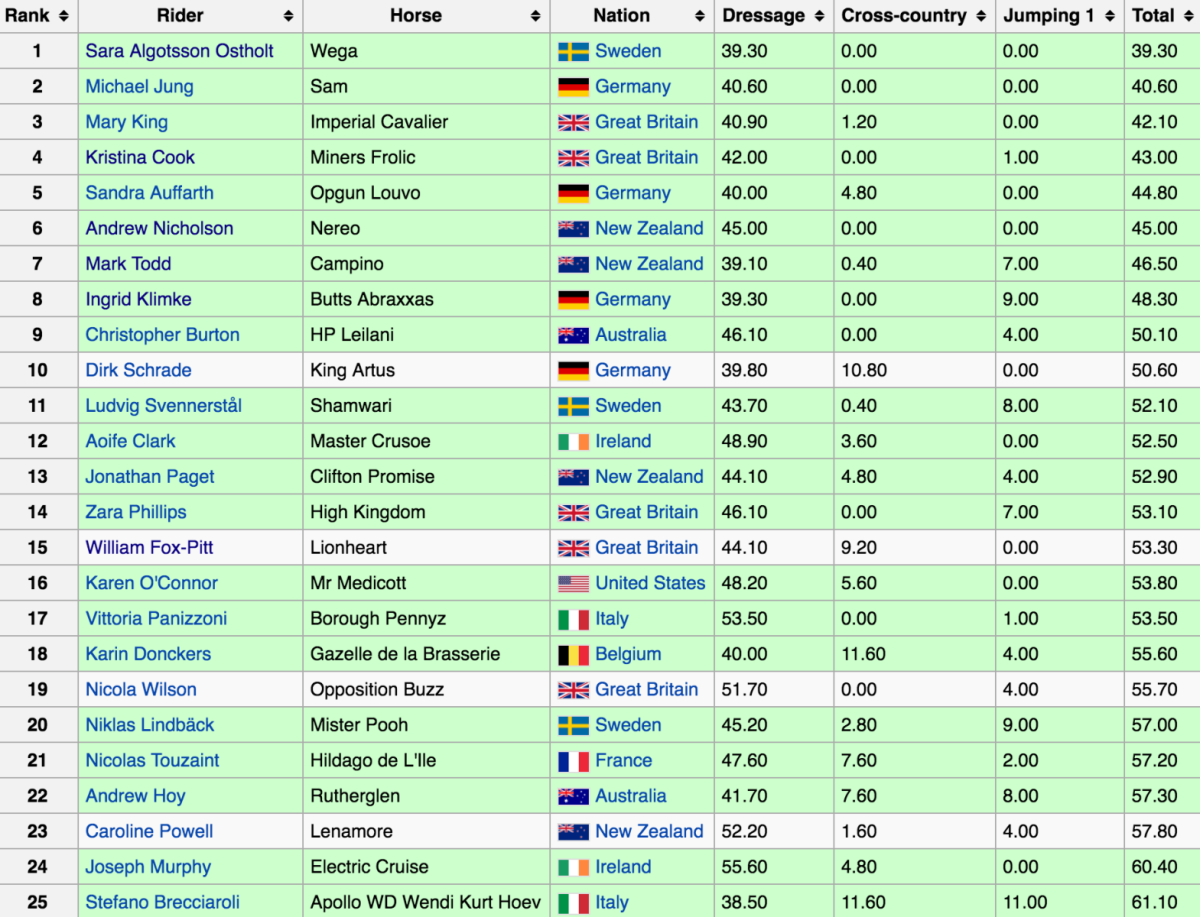 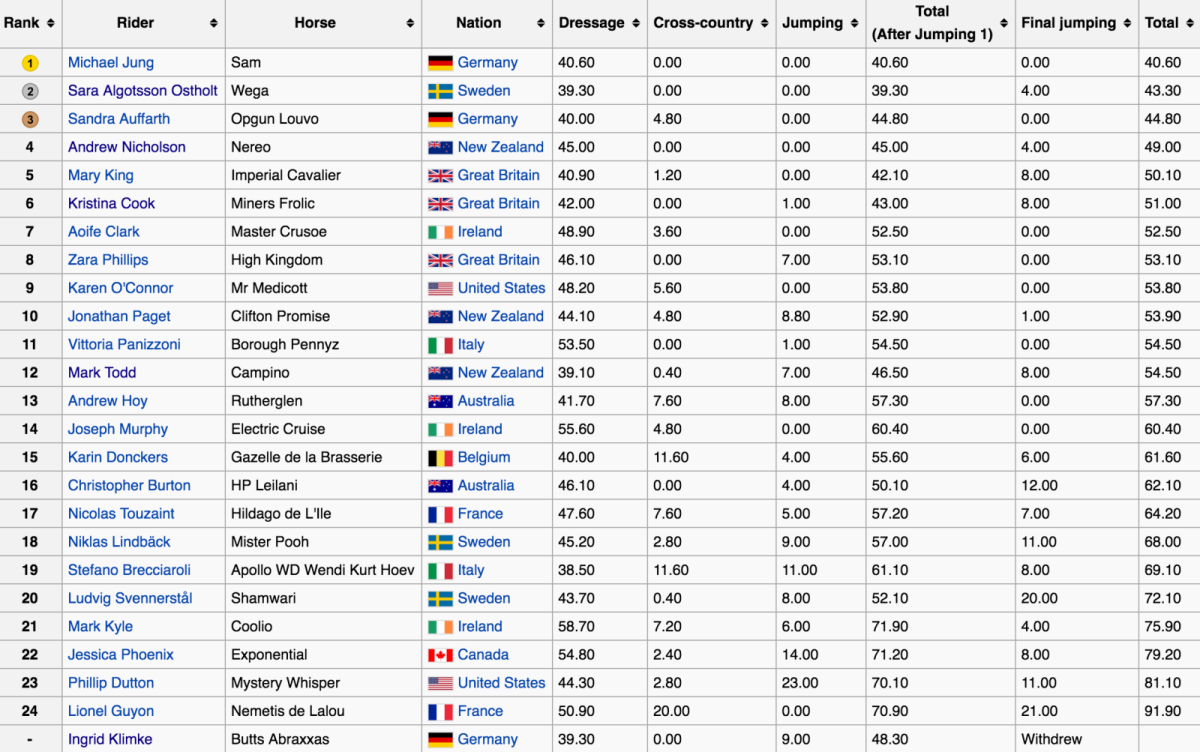 Which is to say, were it not for the addition of a round two, the story of 2012 Olympic eventing would have been written quite differently in the history books. Michael Jung and Sam wouldn’t be coming into today’s competition as the reigning Olympic champions — an interesting thought experiment indeed!

This time around, of course, we have a slightly different situation, as the pair already sits atop the leaderboard.

2016 standings after show jumping round one (team): 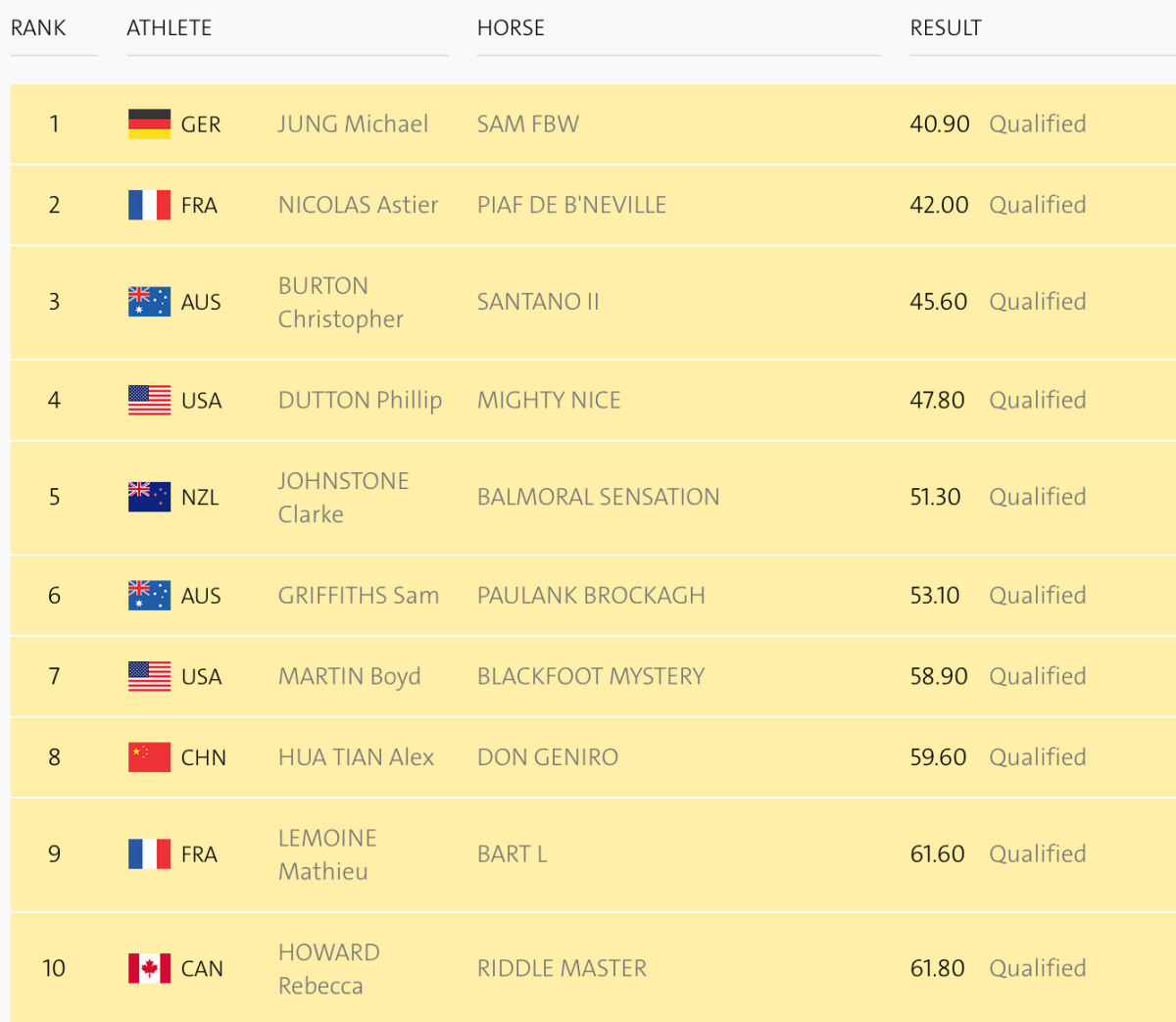 Can they hang onto their position? Maggie Deatrick analyzed their show jumping track record in this morning’s “Show Jumping Powerhouses of Rio“:

Despite a couple of notorious rails (like the one that lost him Badminton in 2013 and the two rails that lost him Rolex in 2015), this horse has actually been quite a careful jumper throughout his career, especially at the CCI4* level. In eight CCI4* events (counting the London Games), he’s jumped double clear six times. Somehow, the three rails he has accumulated have earned him a reputation as a less-than-careful jumper, when the reverse is actually true. Oh, and those two rails at Rolex were the only two rails he’s had in the past 18 months over seven rounds, four of which were at the four-star level.

Bottom line: We wouldn’t bet against them.

Maggie also included France’s Astier Nicolas and Piaf de B’Neville, currently in silver medal position, as a pair that is likely to cling fast to their spot on the leaderboard if not improve upon it should Michael and Sam pick up an uncharacteristic rail.

Fairly careful but not perfect, Piaf de B’Neville has twice incurred a single rail in six rounds over the Olympic qualifying period. Notably, these two jumped clear at both CCIs they attempted in the time period. With a stalking position of third (now second) place, a surprise win isn’t out of the question.

The bronze medal position may be more likely up for grabs. Chris Burton and Santano II have a significantly spottier show jumping record, already pulling two rails in round one to drop from the #1 to #3 spot.

Fun fact: In 2012 Karen O’Connor and Chris Burton, who is currently in bronze position, switched places exactly on the leaderboard between rounds one and two. Karen jumped up the leaderboard from 16th into the top 10 on the wings of a round two double-clear; Chris Burton was 9th after a one-rail first round but pulled three rails in round two to move down into Karen’s original position at #16.

You can bet that another American, Phillip Dutton, would happily trade places with Chris this time around — and being less than a rail apart, anything is possible!

Can’t wait to watch how history unfolds this afternoon in Rio. Round two kicks off at 1 p.m. EST — you can check out the order of go here. Best of luck to all!