Just over a month ago, Sara Kozumplik lost her promising upper level horse Flagmount’s Sterling Prince in a turnout accident.  She was recently faced with another tragedy, at the unexpected loss of her former Rolex partner, Somerset.  Our condolences go out to Sara and her team as they face the heartbreak of another great horse gone too soon. 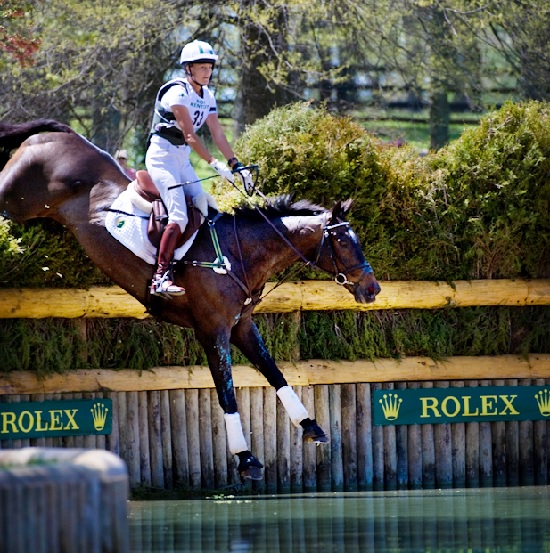 “When sorrows come, they come not single spies, but in battalions.”
So soon after losing Prince, I don’t even know how to announce that I have lost my best friend, Somerset. After a 3 1/2 year absence, he made a joyful return to the sport just last weekend at Surefire Horse Trials. He was the happiest, and the healthiest I have ever known him. I then show jumped at a jumper show this week, came home on Friday, and Saturday morning he was found in his pasture. No signs of any stress or injury, it looked as if his heart had given out in the night.
Somer, or Bertie as he was known as a baby in England, was in his own way designed for eventing. He easily had the movement for top dressage, a gallop that made him canter in 3 seconds under the time at Rolex, and the heart which enabled him to take his enormous scope (but admittedly interesting technique) and learn that the poles must stay up when it counts!
Somerset never got a break. He injured himself in the award ceremony at Rolex in 2009. After successfully rehabbing from that, he somehow contracted a bone infection that was almost impossible to diagnose, as there was seemingly no entry point. Edy and Sean Rameika paid for Somerset to be in hospital and rehabilitation for 9 months, including a surgery and daily regional limb profusions. Talk about fairy God parents?
Somerset was a fighter. He always defied the odds. After almost dying from the bone infection, we were told that he would never be sound again. He was. Then that he would never jump again. He did. Finally that there was no way he could even think about eventing again. He sailed around the xc in the magical way he always did, and pulled up sound and happy.
I would like to once again thank my neighbor, Sandy Johnson, for always helping me in the worst times of my life, the people involved with Somerset the longest, Edy and Sean Rameika, Chris and Rob Desino, my parents, and finally Brian…..who always ends up picking up the pieces.
Somerset you were the horse love of my life. At the end of our journey together, as much as it hurts, I cannot help feeling blessed. Blessed that you were my partner. Blessed that you taught me so much about good cross country riding. Blessed that you showed me how to tough it out no matter the odds, and above all, blessed that you left me so peacefully and so happy that you were back in the sport you loved so much. God speed, Somerset…….sweet dreams.
–
http://youtu.be/iwoTG5CFyq8