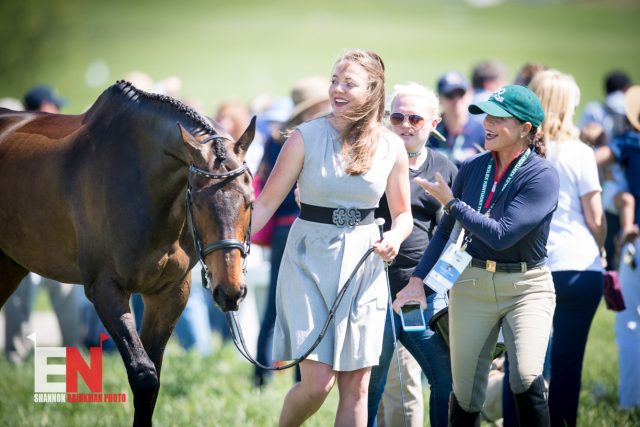 What can you do when you find yourself horseless two days before a competition? Borrow your mother’s four-star horse Rise Against if you’re Maddie Sexton!

“I was set to compete Training on my own horse and our home bred, Celtic Star, but he showed symptoms of a mild case of colic on Thursday morning,” Maddie explained. “I took him home so he could be near Alamo Vet Clinic just in case and, since my mom wasn’t competing ‘Ecko’, she offered him up to me.”

Maddie has become Ecko’s handler as she’s jogged him countless times at some of his biggest competitions in her mom’s place, but she hadn’t yet gotten the chance to compete him herself. “Basically, my mom is super generous and I’m super grateful!” she said. 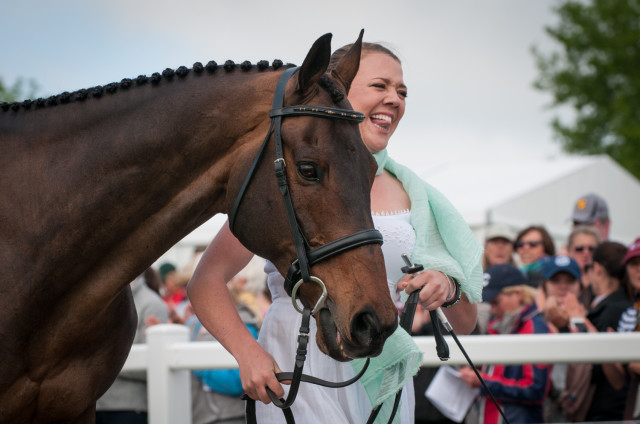 Rise Against and Maddie Sexton, jogging for Bunnie Sexton. Photo by Leslie Threlkeld.

It’s been 11 years since Ecko last competed at training level, but he settled right into a rhythm with Maddie, although not without a little excitement in the warm up.

“I had never ridden him in cross county before, although I have catch ridden a few horses so I wasn’t too worried. He was a bit of mad man in warm up, which I’ve seen when my mom is ready to go out at Rolex, but I can’t say I was expecting it for Training at home,” Maddie said.

“It made me a bit nervous, but the second I left the box he was perfect. I’m my harshest critic, so the videos are a bit hard for me to watch, but it felt amazing. It felt like he knew exactly what I was asking for which was an incredible feeling. He definitely knows what he’s doing and loves it.”

“He’s such a cool guy and I totally get why he’s my moms heart horse. I’m super grateful she let me have the ride and I’m crossing my fingers that the opportunity comes up again,” she smiled.

We are happy to report that Celtic Star was in great health by Friday.

Check out Maddie and Ecko’s weekend thanks to Ride On Video: