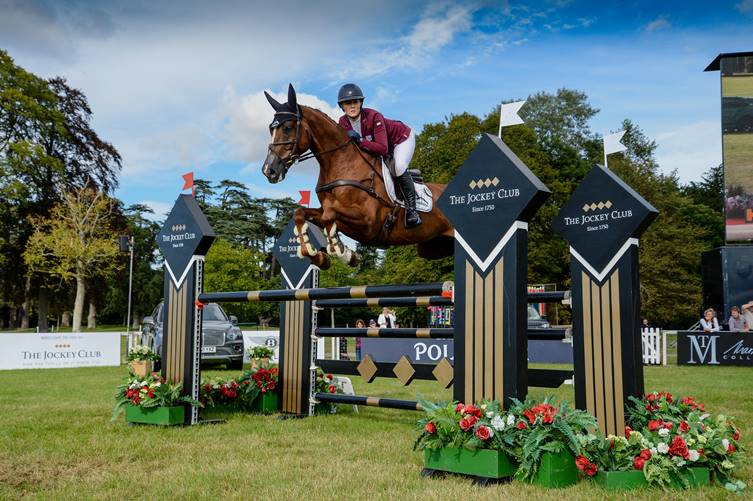 Yasmin Ingham cemented her position as Britain’s brightest rising star in the sport of eventing by scoring the biggest win of her career in the CCI4*-L at Blenheim Palace International Horse Trials.

Riding Sue Davies and Janette Chin’s 10-year-old Banzai Du Loir (pictured below), 24-year-old Yasmin showjumped clear under enormous pressure to hold on to the lead she had established on day one of the competition. She didn’t add a single penalty in the jumping phases to remain on her dressage mark of 25.2.

Yasmin said: “That is the most pressurised situation I have ever been in my life, and I just couldn’t be more grateful to be sat on such an incredible horse going into the final phase. He gave me his all and tried so hard for me. This is the best day of my life!

“I knew that I had put the work in at home and I knew coming here that I had done everything that I could to try to produce my best result. Everything that has gone into this horse from day one has worked up to this – it’s been amazing. This feels so special. I’m so, so happy. When I crossed the finish line, I was trying to believe what had just happened. I felt so proud of him and so pleased he is getting the recognition he deserves.

“To be here at Blenheim Palace and taking the win is something you dream of and I can’t believe it has happened to me. Now I can enjoy it! When everyone cheered, it made it feel real.”

Yasmin grew up on the Isle of Man, and moved to Cheshire to be based at Banzai Du Loir’s owners’ stables. She won individual and team gold medals at the Pony European Championships in 2013. Her most significant senior victory prior to this weekend was when she and Banzai Du Loir – who was bought from France for her to ride in 2019 – took the eight- and nine-year-old CCI4*-S usually held at Blenheim Palace at the 2020 replacement event at Burnham Market in Norfolk.

Ros Canter has a worthy successor to her reigning world champion Allstar B in Michele Saul’s Lordships Graffalo, second to Yasmin. The pair added just 0.4 of a time-fault in the showjumping to finish on 27.1, not even two marks behind the winners.

“I’m very proud of him – he gets better and better with every run,” said Ros. “I’m also delighted for Yasmin – she’s become quite a good friend of mine. We’ve travelled to [the French CCI5* event] Pau twice together with our mothers, just having a really nice ‘family’ time. She deserves every inch of this – she’s a fantastic girl, so good on her.”

While Piggy French and Brookfield Quality hit one showjump to drop from third to fifth, Piggy’s protegee Susie Berry jumped clear on Helen Caton and Caroline Berry’s John The Bull to take third place on their first-phase score of 27.9.

Susie was based at Piggy’s Northamptonshire yard for several years before setting up on her own in 2020. The 25-year-old Irish rider broke her arm in April, and she admitted that she was as relieved as she was delighted to clinch her best result at CCI4* level here at Blenheim Palace.

She was emotional in the aftermath, saying: “He is so talented that I put extra pressure on myself just for him, because he is incredible. He did each phase as well as he could, which I am so pleased about. 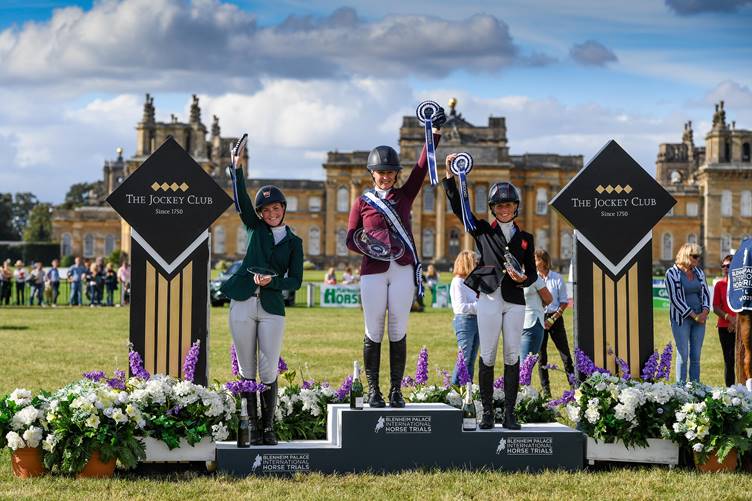 “He’s aptly named – he’s very cocky and arrogant, but as soon as I get on board, that’s what I love about him, and that is what makes him stand out from other horses. He wants it and he wants to win – when he’s in the ring, he fights for me. I have had such a rubbish year but this has completely turned things around.”

The chestnut mare Jalapeno III finished fourth with Gemma Tattersall, completing on her dressage score of 28.7. Chris Stone’s 13-year-old, a daughter of Badminton winner Chilli Morning, fractured a splint bone at Houghton Hall in May and the majority of her fitness work for Blenheim Palace has been done in the swimming pool.

With 2019 winner Piggy March fifth on Brookfield Quality, the top six was rounded off by Helen Witchell and My Ernie, who moved up from 26th after dressage to sixth by adding nothing to their first-phase score of 31.7.

This was the first year that The Jockey Club has organised Blenheim Palace International Horse Trials.

Ian Renton, Event Director and Regional Managing Director for The Jockey Club’s West Region, said: “It has been an amazing four days for absolutely top-class horse sport, and our congratulations and thanks go to all the riders, owners and their supporters.

“I must say thank you to the team who have worked incredibly hard to put Blenheim Palace International Horse Trials on. While we were blessed with a huge crowd of more than 20,000 spectators here on Saturday enjoying the sunshine, the brilliant cross-country action and the spectacular surroundings of Blenheim Palace, we are aware of some issues, particularly around traffic flow, which we will address for next year.

“Thank you also to His Grace the Duke of Marlborough and his family and everyone at Blenheim Palace for their support and help. We have learnt so much from this first event; it is a fantastic occasion and one which we hope we can improve and add to in the future.” 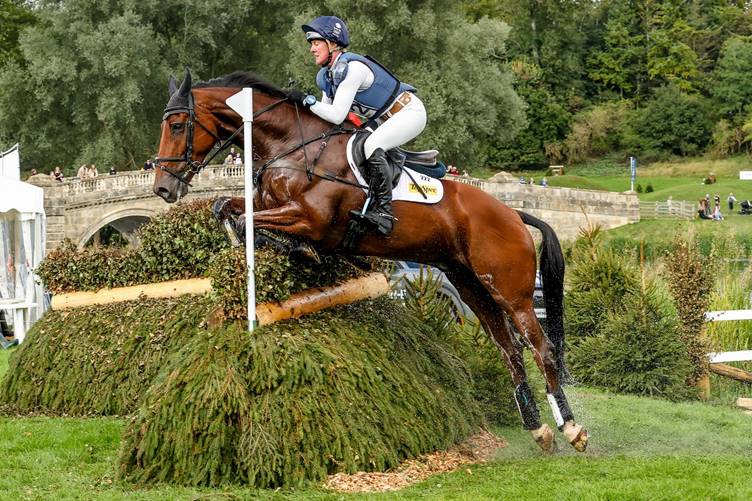 Nicola Wilson had the perfect send-off for next weekend’s European Championships when notching up her first Blenheim Palace International Horse Trials victory, in the prestigious CCI4*S for eight- and nine-year-old horses.

Nicola, 44, was riding James and Jo Lambert’s nine-year-old Coolparks Sarco (pictured below), an Irish Sport Horse produced by New Zealander Andrew Nicholson who announced his retirement from the top level of the sport during the event.

“I am pinching myself,” said Nicola, who won team gold and individual bronze medals at the 2017 European Championships. “It’s always a journey with every horse, and when it comes to a peak at the right time it is very special. It’s been such an exciting week.

“I was wondering if I should be doing this, as I am travelling to the Europeans [at Avenches in Switzerland] tomorrow, but I should have had more confidence in myself.”

With the highest-placed riders running in reverse order of merit, Piggy March’s fast round on Cooley Lancer, for only 1.2 time penalties, elevated her four places to the runner-up spot.

Ros Canter, who is also bound for Switzerland, was last to go across country, but incurred 20 penalties for a run-out on Izilot DHI and finished in 27th place. Tom Jackson, the overnight runner-up on HH Moonwalk, also faulted and dropped to 33rd.

Nicola, who was also fourth on Hawk Eye, was full of praise for the event’s new management.

“The Jockey Club has done a phenomenal job. It’s so exciting to have them involved in our sport,” she said. 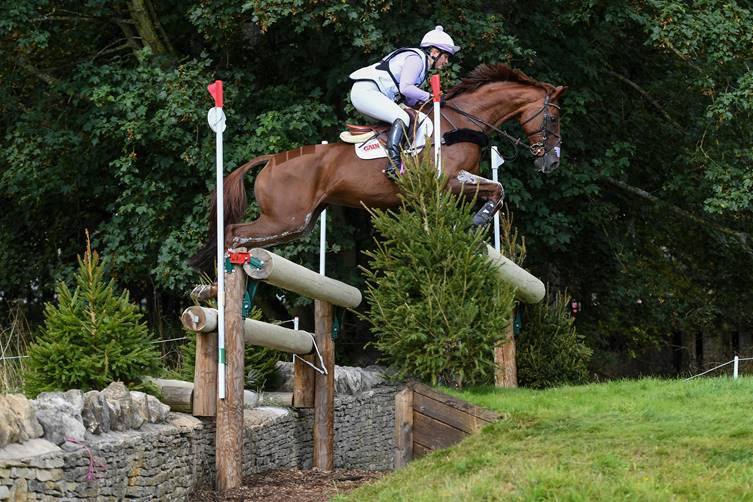 Really good eventing mares are like gold dust in the sport and should be recognised. The highest-placed mares at the Blenheim Palace International Horse Trials received £850 vouchers from the Gemini Stud, to be used on a stallion there within three years.

The winner of this accolade in the CCI4*L was Chris and Lisa Stone’s Jalapeno (pictured below), a 13-year-old by the Stones’ 2015 Badminton winner, Chilli Morning, and ridden into fourth place by Gemma Tattersall.

“I’m so proud of that little mare because she has had just one OI [open intermediate] run since injuring herself in the stable at Houghton in May,” said Gemma.

“It was a tiny injury but she had to have time off to fix it and she’s since been swimming and treadmilling loads and loads. I’ve hardly been to the gallops. So I was very scared, but it worked; she was pretty much foot-perfect and gave me the most wonderful ride. She winged the first three cross-country fences and that set the tone for the whole round. She was so smooth.” 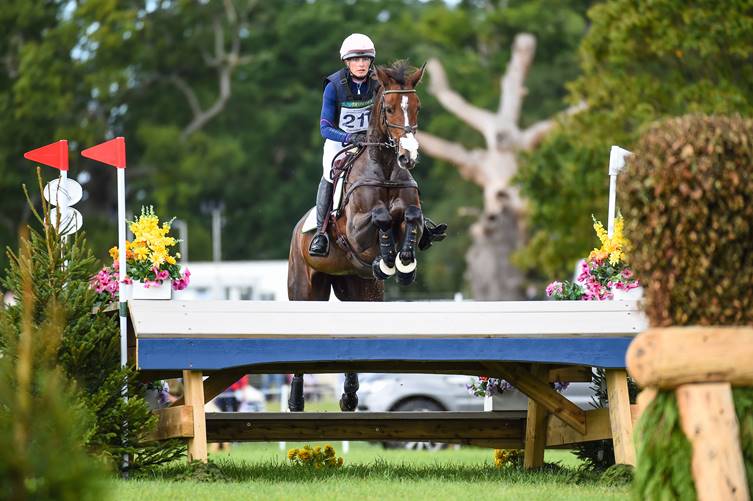 In the CCI4*S, the prize went to Becky Stones’ Miss Pepperpot, third under Caroline Harris. Miss Pepperpot (pictured below) is by the great showjumping stallion Peppermill, a British team medallist and Olympic ride for John Whitaker. He is now 24 and still being used for breeding, in Belgium.

Becky, who manages Ridgeway Stud, is more usually seen on the showjumping circuit, but she used to compete in eventing and says that “the dream” was always to produce an event horse.

“I have four eventers I bred myself, all with Caroline, and watching them is beyond satisfying. It’s so nerve-racking – they are my children – but to see a little piece of Peppermill going round is just wonderful.” 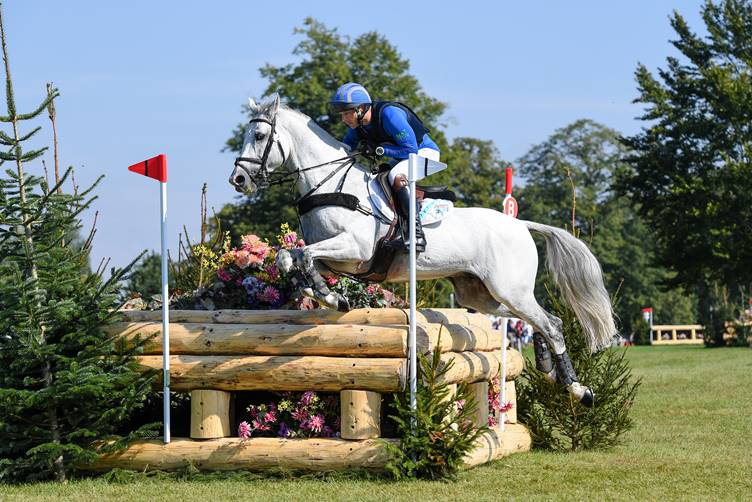 “He’s a real-life unicorn,” said Michael. “He loves competing and gets quite excited about it, but he was brilliant across country yesterday – foot-perfect – and I’m very proud of him.”