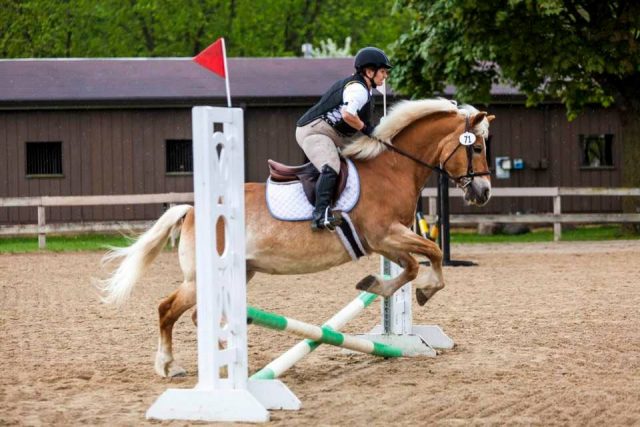 Jen and Linka at FRVPC Mini Event in May 2019. Photo courtesy of Jenifer Kloss.

If you’ve ridden anywhere up and down the East Coast over the past 25 years then you’ve most likely been filmed by RNS Videomedia and as you’ve galloped past there is a decent chance that behind one of those cameras has been Jenifer Kloss. Jen had never heard of eventing before working with RNS, but now she’s living her own eventing dream.

Jen has been a horse lover since a young girl, first taking lessons at the age of seven and continuing to ride for a few years, though during her high school and college years horses would be out of the picture as she pursued other interests. She attended college at Western Illinois University, graduating with the BA in Communications with an emphasis in TV and video production in 1991. Knowing those facts, it would make sense that Jen would end up working with an equine video company, but how she ended up doing so is an unusual story.

Of all things, Jen’s relationship with RNS Videomedia and re-involvement with horses after college began when her cousin, an officer with the Chicago Police Department, responded to a reported robbery at a Chicago apartment. While assessing the scene, Jen’s cousin noticed a number of photographs of horses and riders decorating the apartment of the woman who lived there. They began conversing as the police work was winding down and it turned out that the woman worked for a business called Captain Edgar’s Videos, which provided event riders with competition footage. She gave Jen’s police officer cousin a business card which, knowing her cousin’s interest in both videography and horses, was passed along.

(A small aside: Captain Edgar’s Videos is the original name of the company that would eventually evolve into RNS Videomedia as we know it today. Captain Edgar was the the very first horse of the company’s founder and owner, Louann Franicich. Louann would ask a friend to attend all their shows to video their tests and eventually other competitors began to ask if they could get their tests videoed too. Captain Edgar’s Videos was born and later the business name changed to Rockin’ Stud Videos which eventually evolved into the abbreviated RNS Videomedia that we know and love today.) 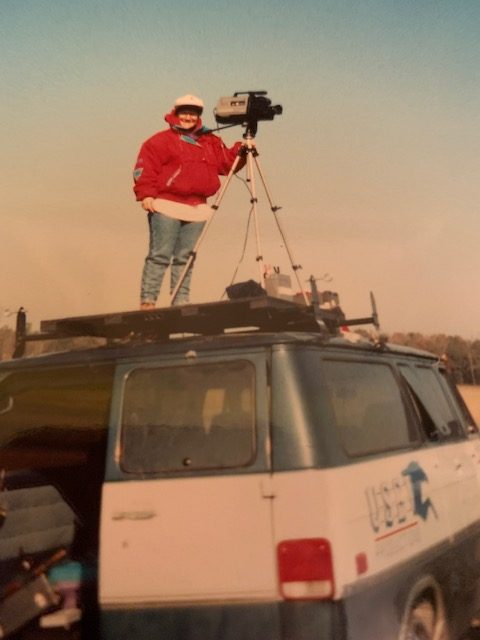 A few days later, Jen drove down to the far south side of Chicago where the Captain Edgar’s Video/ RNS Videomedia headquarters was based at the time to interview with Louann. Despite having ridden as a child, Jen had never heard of three-day eventing before this point and was invited to accompany the team to their last show of the season: the CDCTA Horse Trials at Commonwealth Park in Culpeper, Virginia. After watching a day of dressage and getting behind the lens to shoot cross country for the first time, Jen was hooked and she spent the following year, 1992, on the road full-time with the RNS crew.

“It was an amazing adventure for a twenty-five-year-old,” Jen said. “I just like going on the road trips and going different places.”

A few notable events among the multitude of places that she visited that year were the Virginia Horse Trials, Bromont, and the (then) Rolex Kentucky Three-Day Event which, in particular, was an impressive and inspiring yet slightly overwhelming experience.

“There was so much pomp and circumstance; ladies in fancy hats, people with their dogs, all the activities around, the huge trade fair, and the spectacular horse athletes who you just know that they know they’re hot stuff by the look in their eye as they trot by,” Jen recalled.

“The amount of spectators was just overwhelming — I’m only 4-foot-nine! But to get to see the course and huge jumps ahead of time and be that close, it was crazy fun and super. But as a side note, for about three or four years in a row it would rain every single year so everyone else would groan about going to Kentucky!” 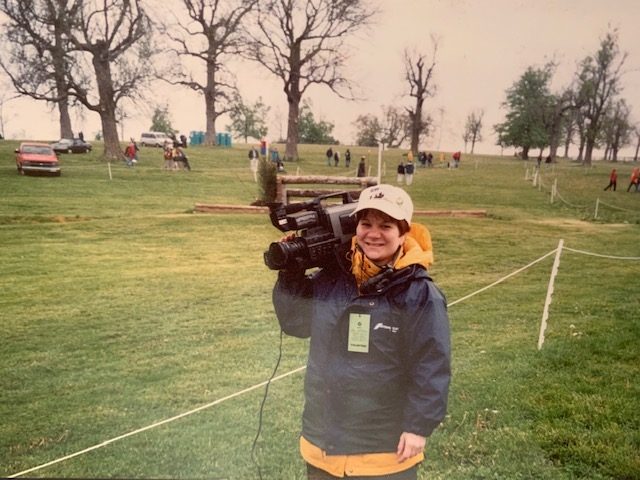 Flash forward 25 years and Jen is still filming for RNS, now as a freelancer while she works a full-time job as an Administrative Assistant for the City of Chicago, Department of Aviation which she’s worked for just as long. At the beginning of each year she takes a look at RNS’s show schedule and arranges her vacation days around those she wants to go to and which they need her help with.

The 25-year relationship with RNS has continued to be an adventure; taking her around the country to different venues, creating enduring friendships with the company’s founder Louann and Mark Fallon (he’s the guy with the hat!) who started out as a crew chief and is now a co-owner, and of course, introducing her to the sport of eventing which she’s held a passion for ever since. As Jen evolved as a videographer over the years, so did her love of eventing and knowledge of the sport.

“As time went on I wanted to know so much about the sport, as these were the amazing days of Bruce Davidson, Michael Plumb, Karen Lende (O’Connor,)” she said. “I tried to soak in as much as possible by walking the courses, learning rules and regulations, listening to the judges during dressage tests, and I always had books with me about the different riders. I loved trying to look at a competitors view as far as what we were filming.”

“We shoot in all conditions whether it’s 110 degree or snowing or we’re standing out there in the rain. Because of my love of the sport I would always give 110% to give that rider the best footage I could give them despite the conditions.” 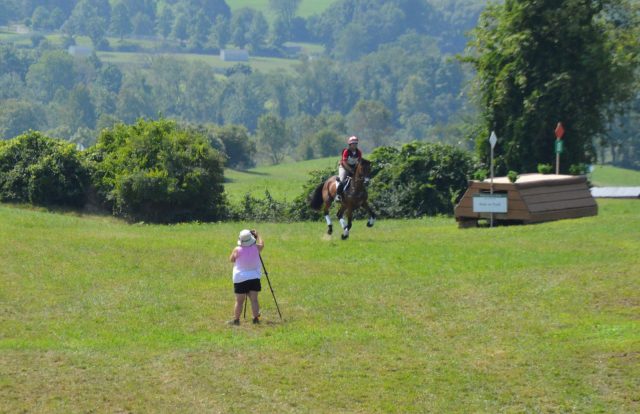 “I just like being out in the middle of nowhere like that.” Jen films Buck Davidson at Millbrook in 2019. Photo by Abby Powell.

Up until relatively recently Jen had only enjoyed the sport from behind the lens, as financial constraints meant no money to get back into a barn for lessons. For about six years, Jen worked her full-time job and another part-time job in addition to freelancing for RNS.

“I finally got to a point where I could crack down on finances, so I buckled down and paid everything off. I did that in my mid-forties and by the time I hit 48 I could say I’m done with the part-time job. As I was getting older, I was talking a lot about getting into lessons and eventing was just something I needed to do,” Jen recalled. “By the time I was 50 I was in lessons.”

Jen had talked about her desire to get back into the barn and take lessons with her good friends and RNS founder, Louann, who found a way to kickstart Jen’s dream of riding again.

“After we were done filming at the AECs in Tryon in 2016, Louann handed me a business card along with my paycheck for the week and said, ‘You’ve got two lessons coming up. I know that this is something you’ve wanted to do for a really, really long time.”

The business card was for ICP instructor Jennifer Rousseau of L’Esprit Equestrian which is based at Snow Angels Farm in Barrington, Illinois. Louann had bartered a few videos of Jennifer’s L’Esprit students for lessons for Jen.

“I’m a crier, so I started crying!” Jen laughed.”Louann asked me, ‘Are you ready for lessons?’ and I said, ‘I sure am!’ It was the start of a new life and a whole new adventure.” 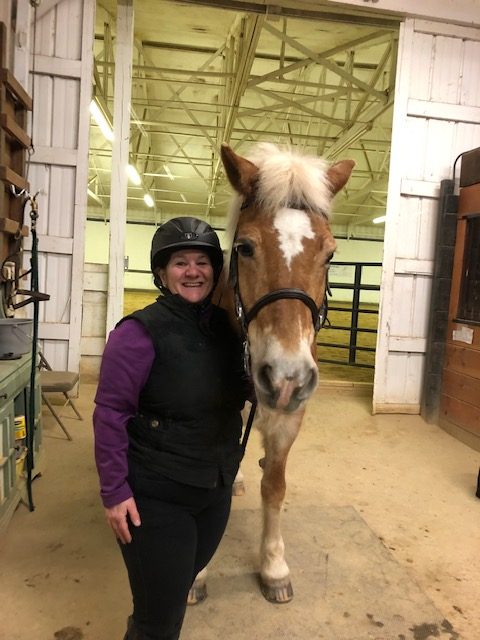 Later that year, Jen cashed in her lessons with Jennifer and got back in the saddle aboard an older Thoroughbred named Truman with whom she re-learned the basics. At the beginning of 2018, she moved on to her current mount, Linka, a Haflinger mare who has previously taken several different riders through Beginner Novice eventing and Pony Club C1 level dressage and will turn 22 years old this year, but shows no signs of slowing down. Jen was able to ride Linka about once a week that year, but then at the beginning of 2019 she had the opportunity to share board for her and ride 3-4 times a week and lesson regularly with Zoe Zanides, who is also a student of Jennifer’s.

Jen competed in her very first horse show last May, doing the pre-starter combined test at the Fox River Valley Pony Club Mini Event and took the top spot in the division out of six competitors. Mark even came our to video and support her. Despite having attended decades worth of events through her work with RNS, being an actual competitor was a whole new experience for Jen.

“I learned everything from trailering the horses in, getting the stalls ready, equipment ready, and attire set, to making sure the horse is all set and warmed up. It’s an experience to have all those people around you. I’ve been to so many horse shows, but I’ve never had the in-the-barn experience. To be there with my teammates — it was fun and the day went by so fast, I was like, ‘OK, I’m ready for more.'”

Plus, being a part of a barn family has brought yet another dimension to her work behind the video camera: “Now that I’m part of L’Esprit when my teammates are going to the same show that I’m videoing at it’s a lot more fun. You get a little giddy when you hear your team member is coming through and just to be able to wander through the barns and say, ‘Hey, how’s it going?’ is a treat.” 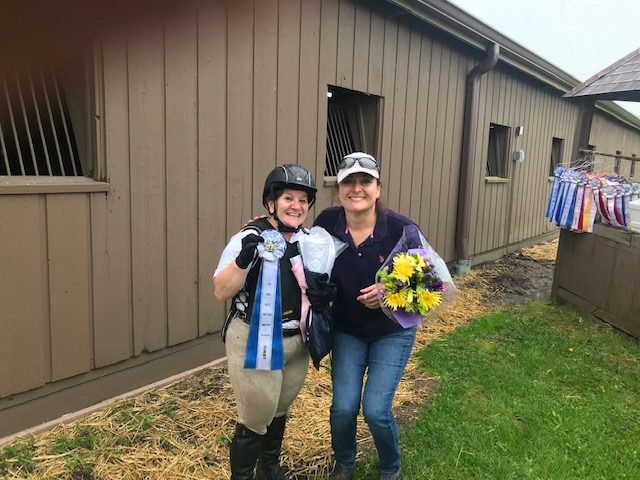 Jen is hoping to make a return trip to the FRVPC mini event this May and then her sights are set on a move-up to the Starter level which is offered at Silverwood Farm in conjunction with their USEA- recognized horse trials in June. Jen’s ultimate goal is to someday compete Beginner Novice at a venue she holds dear: the Kentucky Horse Park.

Like many of us, Jen has found her happy place in the barn amongst horses and like-minded equestrians.

“Being at the barn juts makes my heart happy. There are so many different levels of rider, different age groups, and different personalities, but everybody just comes together as a family and you just help each other out and you hang out in the barn aisle and chat. Any time that I’ve been in a lesson I’ve never had anybody not be encouraging to somebody else.”

“Being 52 years old and working on connection, balance, strength and my jumping — I just love my life. I’m so blessed to have this opportunity. Not many people can say they are truly making their dreams come true.”