EN TRENDS:
A few notes before we begin.  First, William Fox-Pitt’s Cool Mountain, and Oliver Townend’s Ashdale Cruise Master and ODT Master Rose have landed in New York, where they will stay in quarantine until they travel to the Horse Park on Saturday.  In particular, this means that there is a very strong chance we will get to see WFP ride at Kentucky, which is a rare treat indeed.
Also, 3D3W has published its Rolex preview, written by Peter Green.
Check out Part 1, Part 2, Part 3, Part 4, Part 5, Part 6, Part 7 of EN’s Rolex competitor previews.
Now, to continue with our combinations:
Kelly Sult and Hollywood:  Facebook, EN Live Blog

Kelly was one of EN’s first guests in the site’s early days when no one had heard of us, and she will always be an Eventing Nation favorite because of that.  Our fun fact about Kelly is that her dad has taught her throughout most of her eventing career.  Kelly and Hollywood (17yo 16hh Bay TB G) bring experience and toughness to Rolex this year.  The pair has competed at Rolex twice, finishing 14th and 27th, and at the FHI CCI3* three times, finishing 8th, 13th, and 3rd, and the pair did not collect a stop at any of these major events.  Hollywood’s dressage has been steadily improving, and a dressage score in the mid to low 50’s will give them a great shot at a top 10 finish.

Our fun fact about Allison is that she graduated on the Dean’s list from Bowdoin College.  Arthur (17hh Chestnut ISH G) is one of the most talented horses in the Rolex field, and Allison has gained a lot of experience over the past several years.  But Allison and Arthur have struggled under big time pressure recently with an elimination at Burghley followed by a stop at the Blenheim CCI3*.  This pair has a strong history at Kentucky, placing 13th and 14th the last two years, and they have looked very strong in the training sessions I watched this year and at Southern Pines and The Fork.  Allison and Arthur could win Rolex, but this is a very important weekend for Allison’s career and the pressure has never been greater.

UN is a little powerhouse of a mare who comes into Rolex with a great deal of experience.  UN has competed in three previous four-stars, Rolex ’07, Burghley ’07, and Rolex ’08 and had at least a stop in each one, but she has more than enough talent to get around a four-star clean and hopefully this will be the year.  This is definitely a pair to root for.

Our fun fact is that Cavaldi is the name of an italian torturer in the movie The Brother Grim with Matt Damon and Heath Ledger.  “Joey” is a very nice veteran horse to keep an eye on throughout the weekend.  Joey hasn’t had a stop since Rolex ’05, and he jumped around Burghley ’07 clean.  I expect a little time on XC to hold back what should be an otherwise solid weekend.

Will Faudree and Pawlow: Homepage 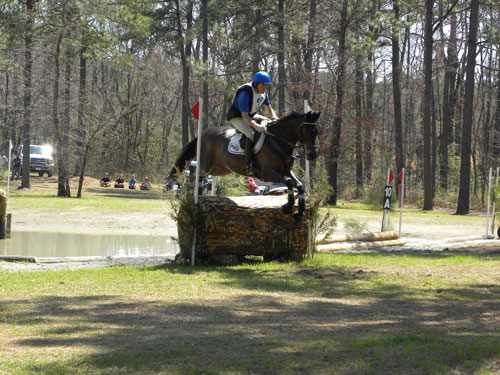 Will’s fun fact is that he grew up on a cattle ranch in Texas (thus the cowboy hat at the jogs).  I have been talking about Will and Pawlow as a pair to watch since I first saw them at Pine Top this Spring.  Powlow reminds me of Antigua in that he fits Will’s style of riding quite well by backing himself off of the fences and letting Will kick on.  Pawlow is unquestionably a young 4* horse, but he has looked more mature each time out this Spring and they haven’t placed outside of the top 10 yet this year.  Pawlow’s dressage isn’t confirmed yet but he won’t add more than 7 or 8 jumping penalties and if things go their way, I expect Will and Pawlow to finish in the top 10, and give the selectors something to think about for the WEGs.

Ian Roberts and Napalm (CAN): Wikipedia

Ian’s fun fact is that his son is a working student for Oliver Townend.  The grey Napalm is perhaps most recognizable on XC because he gallops with a very short neck, which perhaps contributes to the amount of time he usually has.  Ian and Napalm completed Rolex in ’06 and ’07 with clean XC rounds, but shaky dressage and show jumping have held back his placings.  That said, Ian and Napalm scored a 31 in the advanced dressage at The Fork and followed that up with a clean show jumping ride, which gives them good momentum entering Rolex.

Steph and Port Authority are two of Canada’s brightest rising stars.  They have one of those great partnerships that develops between a rider and a horse who have grown together through the levels.  At both Pine Top and The Fork, amidst two of the strongest fields this Spring, Port Authority had the lowest jumping totals of the entire competition.  I don’t expect that to happen at Rolex, but I do expect an excellent weekend to make them one of the highest placed Canadians and to set them up as definite contenders for the Candian WEG squad.

Jonathan is the leading rider for Clifton Eventers, which is a massive program in New Zealand with multiple upper level riders designed to produce top horses and win international competitions.  The program is funded by Frances Stead and any horses with ‘Clifton’ in the name probably come from her program.  Clifton Promise was the 15th ranked horse in the FEI world rankings for 2009, and has Nasrullah bloodlines so he must be fast.  Rolex is this horse’s first four-star, but he is a quality jumper and a good performance here will be a strong step forward for the Clifton program.

Our fun fact about Mara is something I have said before, but is worth repeating, she is an incredible dressage rider who rides some of the most polished tests I have ever seen.  High Patriot is certainly not one of the most athletic horses in the Rolex field, but Mara gets absolutely %100 percent out of him, and then some.  High Patriot and Mara looked very solid when I saw them at The Fork, and the only risk is that he might be slightly out-scoped at the 4* level.  This is High Patriot’s first four-star, but he hasn’t had a stop since 2008, he will be in the top 20 after the dressage, and with a little luck this is a top 10 pair.

EN’s Rolex Pick: Remember that you can vote for three combinations, and the top three will advance to the next round.  Please vote for the 3 pairs that you think will place highest in Kentucky.