EN TRENDS:
Check out Part 1, Part 2, Part 3, Part 4, Part 5, Part 6, Part 7 of EN’s Rolex competitor previews.  So far, 15 combinations have advanced to round 2 of EN’s collective Rolex pick. You will choose the last three to advance to round 2 in this preview post, and round 2 begins Monday evening.  Rolex Entries List
Holly Hudspeth and Last Monarch: Holly’s Website

Do we have any Family Guy fans in the house?  Our fun fact about ‘Stewie’ is that he is named after the violent and villainous baby on FOX’s hit cartoon series Family Guy.  Eventing Nation has had the opportunity to keep track of Holly’s path to Rolex through her EN guest blogs, which has been tremendously fun, and I expect the best is yet to come.  Stewie is very energetic *understatement* young little horse, but Holly does a super job managing his emotions.  Holly and Stewie have finished inside the top ten placing in 10 of their 12 advanced level competitions together.  A rider fall at the Jersey CCI3* is their only issue on XC in the last 2 years and their dressage is improving each time out.  I think the tension of the Rolex environment will keep Stewie from showing his best stuff, but a steady weekend will set them up well for making the team next year.

Sara was the highest placed young rider at Rolex in ’05, ’06, and ’07 and holds the record as the youngest rider ever to complete Rolex.  However, Sara is older now and pressure is on to ride like the experience she has.  Bred in Idaho, ‘Tony’ is 2/4 lifetime on 4* cross country courses, collecting a stop at Rolex ’05 and retiring at Burghley in ’07, but he jumped around Rolex ’06 and ’07 finishing 14th and 12th respectively.  I expect Tony to jump around on Saturday and a finish just inside the top-10 would be a great weekend overall. 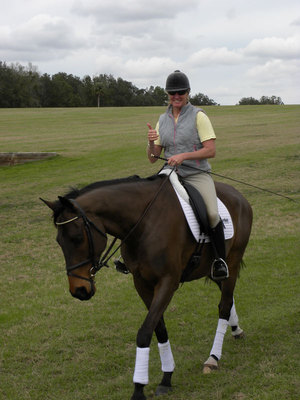 While I am not nearly the gentleman that Mr. Wofford is, I too refuse to discuss in print the rumors that surround Karen regarding her tattoo-so stop sending me emails people!  If and when there is a police report involving the tattoo, we will of course publish that in its entirety.  Mandiba has all the tools to carry Karen to the promised land this fall, but they need to get around this weekend.  The trick this weekend is for Mandiba to be efficient enough around most of the course so that he can have time to study the technical questions, but he doesn’t have to be the fastest horse on Saturday to have a very successful weekend.  Karen delivers in the clutch, and this weekend won’t be different: top 10 lock. 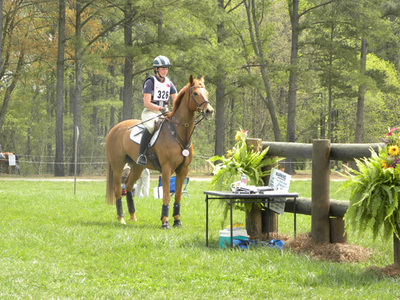 Another member of the O’Connor Event Team, Lauren is Jimmy’s pick for the highest placed Rolex rookie, and for good reason.  Lauren has developed as part of OCET into one of our country’s brightest rising stars, and I guarantee this is the first of many Rolex appearances for Lauren.  Lauren and ‘Snooze,’ a 15.3 Chestnut Anglo-Arabian, have grown up together and they bring a quality past performance record to Rolex with only clean XC rides since early 2009, and just 3 rails in their last 7 events.  I bet that time on XC and maybe in SJ will hurt their final placing a bit, but I expect a quality weekend from Lauren and Snooze.

Michele and Amistad have had a tumultuous spring, with wins in the advanced at Chattahoochee and Pine Top and a 2nd at Rocking horse, but also a withdraw after a stop on XC at Poplar, and a fall at The Fork.  Their most recent event was the win at Chattahoochee last weekend, and hopefully they can keep the momentum for a quality Rolex weekend.

Once Phillip, Buck, and Oliver withdrew a few of their horses, it left Amy with the best one-two arsenal in the field.  ‘Devon’ is considerably less experienced than his stable mate Leyland, but his record shows that he should not be underestimated.  Amy  believes (very wisely in my opinion) that horse trials should be viewed as preparation for three-days, so Devon has time penalties at most of his horse trials, but he made the time when it counted at Fair Hill 2008 and won that event.  I expect Devon to have a steady trip around Rolex with some time, but a sub-50 dressage test and a clean show jumping could still put them in the top 10, and certainly the top 20.

Jennifer and The Good Witch stormed onto the 4* scene a couple of years ago with an 11th at Pau in 2007, and a 7th at Rolex ’08.  After a fall at Rolex last year and a stop at Burghley, they still find themselves on the B-list, but they need a clean round this weekend to stay there. On the upside, this pair has a very good show jumping record and they can make the time on XC.  If they get around, I like them for a top 10 finish.  Yes, I understand that is probably the 15th pair I have said could finish in the top 10, but you get the idea.

This is a tough pair to figure out, with 8 withdraws or retires in their last 13 events.  They did win at Poplar Place earlier this spring, but a solid XC ride and a good completion should be their goal at Rolex.

Ashdale Cruise Master is Jimmy’s pick to win Rolex.  Oliver is one of the best riders in the world, he won two 4*’s last year, he is riding for more money than any eventer in history, and the pair won their last full outing before Rolex, a CIC3* at Burnham Market.  What’s not to like?  If I had to nitpick, I would point out that Ashdale was eliminated and had a stop in his two previous four-stars, admittedly with a different rider.  Oliver gives me that feeling that he will finish on his dressage score no matter what, so I like this pair to finish in the top 5, but maybe not to win.

On a personal note, I had no idea what I was getting into when I started these previews and each one probably averaged 15-20 minutes.  So, we are not going to do Badminton previews, and next year they will be shorter.  I will probably give my top 10, top 3, and a pick to win in the next couple of days.  Go eventing.

EN’s Rolex Pick: Remember that you can vote for three combinations, and the top three will advance to the next round. Please vote for the 3 pairs that you think will place highest in Kentucky.