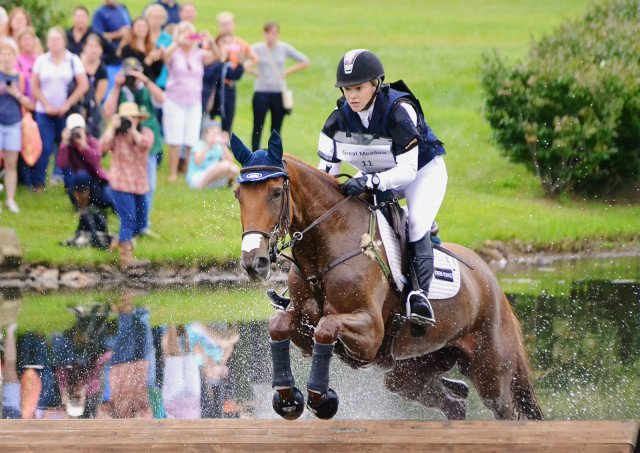 Entries for the Rolex Kentucky Three-Day Event close today, and we’ve already exceeded last year’s record high of 82 entries. As of today, 84 horses and riders are entered to contest the event, and we’ll likely see a few more trickle on in the next day or so as entries are finalized.

As for new combinations added to the list in the last day, Marilyn Little and RF Demeter will make their fourth appearance at the event. “Demi,” a 13-year-old Oldenburg mare owned by Team Demeter, finished ninth at this event in her CCI4* debut in 2012, and she finished sixth last year. Both times she’s completed the course, she’s finished double clear.

We have a second Kiwi on the list today, though Emily Cammock and Dambala will actually be traveling all the way from New Zealand to compete! Emily last competed in a four-star at Badminton in 2008, and we’re excited to welcome her to U.S. soil with Dambala, her 15-year-old New Zealand Thoroughbred gelding, for his CCI4* debut. They won the CCI3* at Taupo in 2013.

Kate Chadderton and Collection Pass will return for another crack at Rolex after parting ways at the ditch and wall last year. “Cole,” a 13-year-old Thoroughbred owned by Rege Dvorsky, bounced back from surgery on his fetlock joint last summer and looked in very good form this past weekend in his first FEI event since the accident at Carolina International.

Werner Geven and Vandiver will represent the Netherlands in the horse’s CCI4* debut. An 11-year-old Trakehner gelding owned by Debi Crowley, Vandiver finished 13th in the CIC3* at Red Hills earlier this month and ninth in the CIC3* at Poplar Place last weekend in their final prep run for Rolex.

Fly Me Courageous will also make his first four-star start at Rolex with Sara Murphy in the irons. The 10-year-old Thoroughbred gelding owned by Debbie Foote finished 22nd in his first CCI3* at the Dutta Corp Fair Hill International Last Fall to qualify for Kentucky. How great is it to have so many Thoroughbreds in this most recent round of entries?

In addition to setting a historic high for number of entries, this field is also one of the most diverse the event has ever seen, with riders from nine different nations represented: Australia, Canada, Great Britain, Germany, Ireland, New Zealand, Sweden and the United States. Stay tuned as we wait to see who else appears on the list!