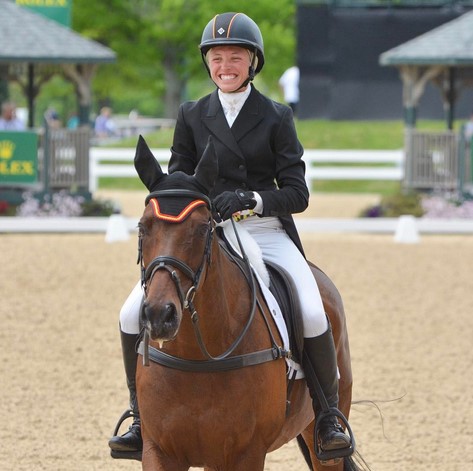 It’s just about time to wrap up the dressage here at the Rolex Kentucky Three-Day Event. This morning we were treated to some real master classes on how to perform a CCI4* test, and it’s Clark Montgomery leading the charge with Loughan Glen on a 33.6. You can catch up on our full report here and our morning open thread here.

While it will be a tough play to best Clark’s score from this morning, there is still plenty of deep talent left to see today, and it’s likely we’ll see quite a few more shuffles on the board before we finalize the standings heading into cross country.

Keep refreshing this page for the latest, and we’ll be joining you shortly at 1:30 p.m. EST with the first ride of the afternoon, Lillian Heard and LCC Barnaby, her second ride of the weekend.

What a beautiful final Rolex ride for Allison and Arthur! We're so honored to have been a part of this special team's incredible career. #Repost @useventing with @repostapp ・・・ There wasn't a dry eye in the Rolex Stadium today as Allison Springer gave Arthur one last farewell ride in Kentucky #rk3de #eventinglegends

3:38 p.m.: Well it will be Clark Montgomery, Michael Jung and Kim Severson who are your top three heading into tomorrow’s cross country! Stay tuned for the full report, and I will continue to add more tidbits to this thread.

3:37 p.m.: I really hope that the judges kept a score for Allison because we would love to know how she would have placed!

3:35 p.m.: Allison receives a standing ovation from a packed house as her final curtain call with Arthur comes to an end. The pure emotion that we’re seeing right now is overwhelming. She now takes a victory gallop as a final farewell. I am really sorry I don’t have more GIFs, my computer chose the perfect time to say nah.

3:19 p.m.: And now we’re on to our final judged ride of the day, Buck Davidson and the homebred by Bruce Davidson’s Petite Flower.

3:17 p.m.: Jessica knows that test was a solid one! She looks thrilled.

3:15 p.m.: Check out Holly Jacks and Will Coleman’s thoughts on their tests:

3:10 p.m. An absolutely lovely test from Phillip and “Cave.” Unfortunately, my GIF maker has decided to crap out on me so bear with me as I try to get it up and running again.

3:02 p.m.: Some tension will hurt Will’s score with Tight Lines but a solid showing with a good finish for this horse’s first CCI4*.

2:57 p.m.: Will Coleman and a stunning looking Tight Lines are the next in.

Will Faudree gives Pfun a big pat after seeing his score of 47.6 in the horse's CCI4* debut #rk3de #bestweekendallyear

A 57.7 for our final Rookie pair, Holly Jacks Smither and More Inspiration #RK3DE

2:48 p.m.: And now we are on to our final Rookie, Holly Jacks Smither and More Inspiration, representing Canada. Will Faudree earned a 47.9 on Pfun.

yeah, me and my bestie Michael Jung hanging out at #Rolex #bestweekendallyear #rk3de pinch me im dreaming!!

Boyd Martin hams it up for the crowd at Rolex after the best test of Steady Eddie's career! #rk3de #bestweekendallyear

"That was a super test for Steady Eddie, that was the best this horse could have done!" – Silva after Steady Eddie's dressage at #RK3DE pic.twitter.com/HkvLLRUrXl

2:23 p.m.: Nice changes from Boyd, I missed the last one off of the extended canter, but that was my favorite. A lovely transition from the extended to the collected and a nice lift for the change.

2:21 p.m.: Am I the only one who was kind of wishing that the FEI didn’t institute a new rule about not catch riding at this level so that William Fox-Pitt could have ridden this horse?

2:17 p.m.: And the final of our second to last group today is Boyd Martin and his second ride, Steady Eddie.

2:14 p.m.: Not quite as flashy as the leaders, he’s trending more towards the 67% but a consistent and obedient test about half way through.

Good luck finding a bigger or more passion group of fans than Woodge Fulton has! #rk3de

2:08 p.m.: Tim left a few points on the table in the latter half of his test but nailed his final halt to give a good final impression. They will take a 46.9 into cross country tomorrow. Next we will see Doug Payne and Vandiver.

2:04 p.m.: A superb start for Ringwood Sky Boy. This could be a challenger! A slight mistake when Sky Boy tried to take a step forward in the rein back and then hit the board during.

2:01 p.m.: And now we have Tim Price with Ringwood Sky Boy, who could be ones to challenge the leaders.

Jordan Linstedt and RevitaVet Capato earn a 47.3 to shave a couple off of their 2016 score #RK3DE

1:59 p.m.: John Kyle comments that the number of changes in this test has held many riders back from better scores, especially since they come as some of the last movements of the test.

1:58 p.m.: A lovely change for Capato, who has my favorite gallop. Just wait til you see him tomorrow.

1:55 p.m.: We are now joined by the lovely Jordan Linstedt and RevitaVet Capato.

A 47.8 for Matt Brown and Super Socks BCF with a couple of spooks but some lovely movements #RK3DE

1:47 p.m.: A little tense heading into the first medium trot on the short diagonal. Perhaps a bit of tension from this horse, but they still present a really nice picture.

1:46 p.m.: Next up, Matt Brown and Super Socks BCF. Matt surely has his superhero socks on, and this will likely be a super lovely test.

1:43 p.m.: And Woodge has made her official Rolex debut! We all know Captain Jack is not a huge fan of the dressage (we get it, buddy), but now it’s on to the fun stuff!

1:38 p.m.: And now we have another Rookie and another one of our youngest riders this year, Woodge Fulton and Captain Jack.

1:35 p.m.: Lillian has a big grin as she makes her final halt. A really nice test with just a couple of mistakes from LCC Barnaby. They earn a 57.0 from the judges. Barnaby looks quite pleased with himself!

1:32 p.m.: Karen O’Connor comments that LCC Barnaby is not “the most extravagant” of movers, so Lillian really has to concentrate on quality of transitions and accuracy, as well as setting her horse up as best she can to get the most out of each movement.

1:30 p.m.: And here we go! Underway with Lillian Heard and LCC Barnaby, who is 11 this year and looking for his second CCI4* completion this weekend.

1:27 p.m.: The ever wonderful John Kyle is now re-joined by Karen O’Connor for this first afternoon session.