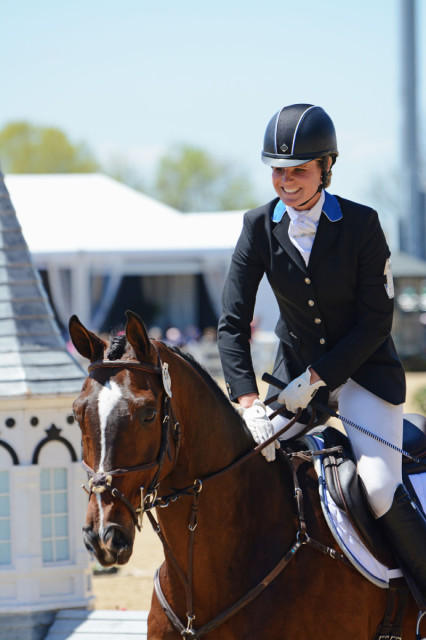 Many horses who competed at the Rolex Kentucky Three-Day Event in April are starting to return to competition after well deserved breaks. Barbara and Gary Linstedt’s Revitavet Capato, who finished 35th at Rolex with rider Jordan Linstedt, has had a great start to his summer season.

Jordan and the Hanoverian gelding traversed the country and spent several weeks training and competing on the East Coast before heading to Kentucky, but they are back home in Washington State and it looks as though they haven’t missed a beat. They scored a 43.7 in dressage and added no penalties jumping to secure the victory in the CIC2* at picturesque Aspen Farms Horse Trials in Yelm, Washington.

Nikki Ayers and Andree Stow’s Rubicon added 8.8 penalties to their score for second place. Mary Burke and her own Prince William moved up from fourth to finish third on a 54.1.

Kimberly Steinbuch and Ruth Bley’s Spartacus D’L’Herbage were on point this weekend in the CIC*. They are building up a solid resume at the level, with this being their second one-star win this year. They were well ahead of the competition with a dressage score of 40.3. Two double-clear jumping rounds solidified their position and their partnership.

Caroline Smith and Lucas maintained the reserve placing throughout, placing 47.6 on the flat and adding nothing to their score. Likewise, Carmen Holmes Smith and Ali Holmes Smith’s Spartacus finished on their initial score for third. 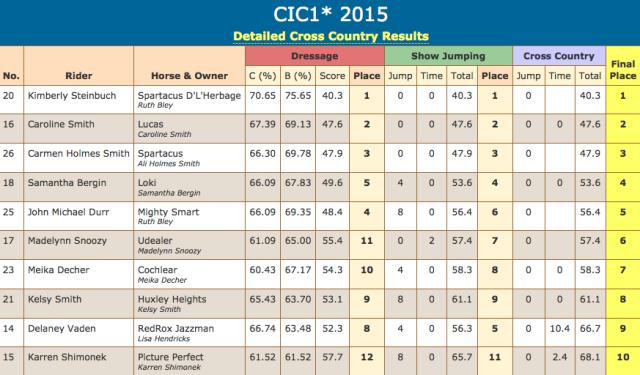 On a very, very hot day in Aiken, South Carolina (and indeed all over the Carolinas… it’s boiling y’all), Preliminary through Tadpole competitors are ran all three phases in a one-day event. Technical Delegate Mellisa Davis Warden said the event took all the necessary precautions to be sure all participants are safe.

Preliminary was the first to finish up this morning before the temperatures skyrocketed. Sarah Kuhn and Deborah Kuhn’s Dutch Warmblood mare Atlanta B picked up their second Preliminary win in the last month. They scored a very good 25.9 in dressage and were just 4 seconds over the optimum time to easily secure the win.

Colleen Rutledge’s Covert Rights is also back in action after an 11th place finish at his first four-star in April. Competing in the Advanced Combined Training division at Seneca Valley, they won on their dressage score of 47.3.

Lauren Balcomb and her warmblood gelding Guido Hatzis completed their fourth Stateside event as a member of Team Windurra. Scoring a 26.7 in dressage they got off to a strong start in Open Intermediate 1. A rail in show jumping and 2.4 time penalties was not enough to knock off the top of the leaderboard and they won with room to spare.

Second place in OI-1 went to Sarah Cousins and Quigase du Lac. Conor Rollins and Fernhill Tiger Con round out the top three having moved up from fifth after dressage.

Alan Triana and Ofrenda steadily climbed the leaderboard in Open Intermediate 2. They were the only pair in the division to finish on their dressage score which moved them from sixth to the top spot. Abraham Ojeda and Obusero were second with 5.6 time penalties on cross country to add to their scrore. Enrique Mercado Romana were third.

Prepping this morning and saw the Mexican Equestrian team. This is how they roll

All three of these riders, along with Daniela Moguel with Cecelia and Agave and Guillermo de Campo and Quelite, will be competing at the Great Meadow International Horse Trials next weekend in preparation for the Pan American Games.

Cindy Anderson-Blank and Windchase Aquilla won the Open Preliminary on their dressage score of 22.5, which was quite a competitive division, with the top seven finishing on a score in the 20s.

The top two in the Preliminary Rider division were the only ones to finish without cross country time faults in their class, which had a considerable impact on the leaderboard. Randa Sorzano and Pleasant Rendezvous led from the start with a 24.5. Rachel Nymeyer and Starstruck moved all the way up from seventh after dressage to finish second.