The Thoroughbred mare was never supposed to be a top notch event horse. In fact, she really wasn’t even meant to be a top level racehorse. Cupid’s Tart, by Frisk Me Now out of Teetawak, by Lil E. Tee, never made it to the track.

“Some farms breed to race, and some breed to sell. I think she was bred to sell. Her breeding is very average for being bred in Kentucky,” Angela Gryzwinski said of her Rolex mount, who was later re-named Novelle.

Due to some OCD lesions on her leg, Novelle found herself as a racetrack reject as a yearling in 2003. Angela was living in Kentucky at the time working odds and ends jobs at Thoroughbred farms and vet clinics, and it was at one particular vet clinic where she met her future four-star partner.

“One of my friends managed a breeding farm and (Novelle) was one of their rejected yearlings because of the lesions,” Angela said. “Her owner said he thought she’d jump, so I rode her when she was an unbroken 3-year-old. She could really jump well, so I helped with her for awhile.”

She wanted to buy the mare, but the lesions that had ruled her out as a racing prospect also made Angel nervous about Novelle’s career as a sport horse.

“I passed on the opportunity to buy her and ended up moving back home to Texas,” she said. “Novelle’s owner called me about a month later and asked if I’d like to have her. He drove her down to Texas and gave her to me.” 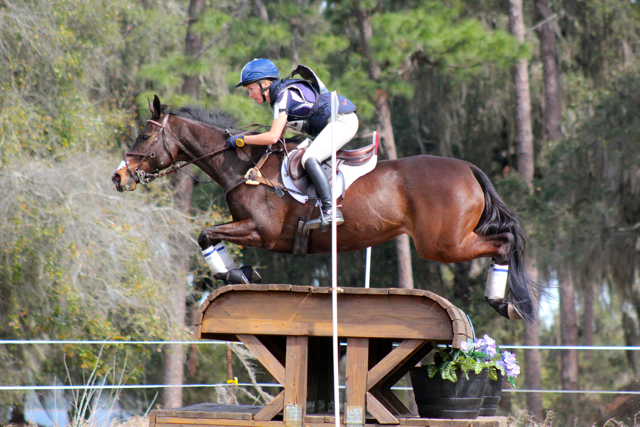 Still worried about the potential longterm effects of the mare’s OCD lesions and not wanting to invest money she didn’t have on vet visits, she had some radiographs taken of Novelle’s joints.

“At that age (4 years old), you don’t know how they’re going to mature, and at the time I was broke and I didn’t want to have a ton of vet bills. But since then, every joint they had their eye on has seemed to have been resolved; we have not seen any evidence of any issues, so it’s definitely worked out in my favor.”

Angela thought perhaps Novelle would be a good event horse, though dressage has been a struggle for her. “She’s a typical quick Thoroughbred mare. She was quite competitive as a lower level horse, but the upper level movements are harder for a horse that’s built like she is,” Angela said.

“She’s a little downhill. The things that make her fast also make it difficult for collected movement. She’s actually a lovely mover, but if she had her choice she’d only have one speed of canter, which would be about 100 miles per hour!”

Two years after Angela and Novelle began their partnership, the mare made her debut at the FEI levels and eventually stepped up to the Advanced level in 2013.

“Everything I ever did made me think she was never going to make it to Advanced. She is very careful. One of the first Intermediate show jump rounds we did, we went into the ring, and she was impressed. It was the first time I’d ever felt her be impressed, and it made me nervous,” Angela said.

“I thought maybe she was scared, but I’ve come to understand and embrace that she doesn’t like to hit fences. On cross country, she is a very careful horse. She would rather say no than put herself in a bad situation. Her carefulness had me thinking she would be a very good Prelim or Young Rider horse, so I tried to sell her a couple of times, but we just kept plugging away.” 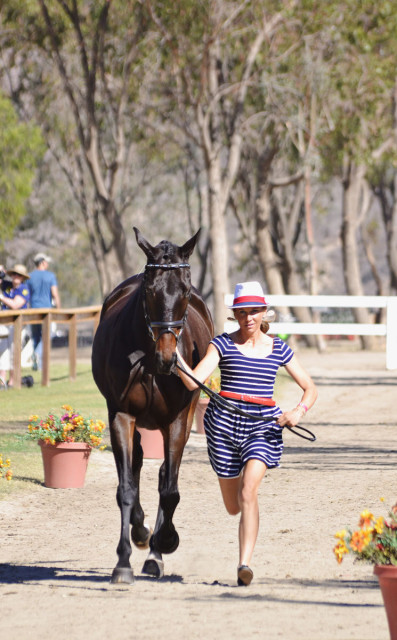 Angela kept making progress and brought Novelle to Rebecca Farm in 2014 to go for their first CIC3* completion together.

“I felt like I was totally in over my head walking the cross country, but she just blazed around there,” she recalled. “I thought maybe she had finally seen enough things that her confidence had changed.”

Angela spent some time in California working with Tamie Smith, showing her mare as many different courses as possible with great results. They haven’t finished outside of the top 10 since Rebecca Farm last year, including at the Galway Downs CCI3* last fall.

“Rolex became a goal when I crossed the finish line at Galway Downs,” Angela said. “It’s the ultimate goal as an eventer. Her ability to jump the fences has never been a question for me, but as a business owner, I never imagined I’d have the time to campaign her.”

Thanks to the support Angela has had from her peers and family, she was able to take the time to campaign her mare while still maintaining her business back home in Fort Worth, Texas, where she runs a thriving lesson and training program in Tempus Eventing.

“When I finished Galway, I was confident she’d figured it out. And she’s come out this spring just gangbusters. I don’t know what Kentucky will hold for her, but I know she will give it 100 percent.”

Angela is quick to thank all of the people who have been behind her through her journey to get to Kentucky.

“I have every single person in my barn coming to cheer us on. These are the people who have made this happen — the clients who have been supportive of my being away, my boyfriend, everyone has sacrificed a lot to help me get here. For me, this is all a pipe dream coming true, and I’m excited to share that experience with the people who are so important to me.”