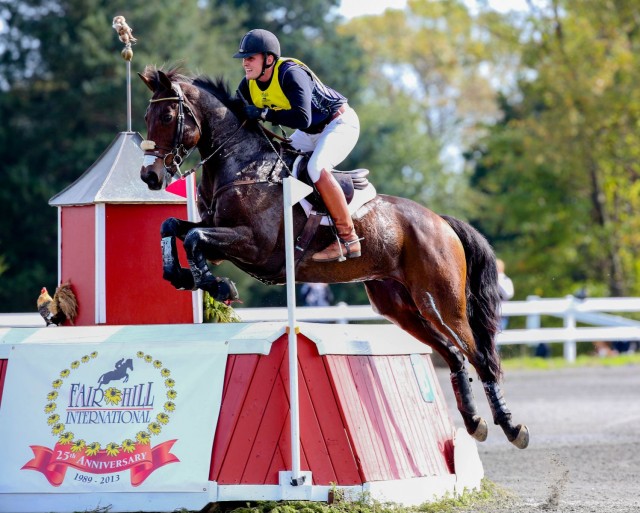 Bobby Meyerhoff has had Rolex in his sights for quite some time now. After moving from California to the East Coast to work for Stuart Black, Bobby went on to found his current business, Meyerhoff Show Horses LLC, in 2006. Alongside his wife, Danica, Bobby has made it his goal to produce top quality show horses for the elite levels of equestrian sport.

Dunlavin’s Token, a 2000 Zangershiede gelding imported from Argentina by Dunlavin Eventing, was produced from Training level to Advanced by Danica before Bobby took over the ride. Danica, who was working for Rebecca Howard and Dunlavin Eventing when Token was imported, eventually took the horse all the way through the CCI3* level, successfully completing Jersey Fresh in 2011. Bobby then took over the ride and began preparing to qualify Token for Rolex.

In 2013, Bobby and Token qualified for and entered Rolex, but the gelding came up a bit sore the Monday before competition. “We didn’t want to ruin him by running him anyway,” Bobby said. “I wanted to have a horse for next year, but I was devastated.” Bobby and Token went on to finish the year strong, completing the CCI3* at Fair Hill to end their season.

This year, Bobby once again set a goal to compete at Rolex. “I was really pleased with how he ran around (at Fair Hill),” Bobby said. “So I decided to have another go at Rolex this year. He feels great; actually he feels healthier and sounder than he did last year, so I think we’ll have a good go.”

As most other riders are also doing, Bobby is not looking at Rolex differently than any other event to prevent the nerves from escalating. “I know it’s going to be tough, and there’s a lot of atmosphere,” Bobby said. “This horse isn’t too great in dressage; he is pretty tough and hot, so I know it’s going to be a challenge. I don’t anticipate to blow anyone out of the water, but I am aiming to have a smooth test with no explosions.”

Bobby is most looking forward to the jumping phases, where Token really excels. “He’s a horse that’s really fast on cross country, and he’s going to be raring to go coming out of the start box. I plan to take the first couple of minutes to kind of be there for him and let him settle in, and once that happens I am going to let him go a little and let him do his job.”

Bobby took Token to the CIC3* at The Fork this past weekend, where he withdrew after jumping a double clear show jumping round. Not to worry, though, as this was all part of Bobby’s plan. “I’m going to make the decision to run cross country while I’m there,” Bobby said prior to The Fork. “If the stars align and the footing is perfect, I may let him run for fitness reasons, but if not there is no reason to push him. I’ll work on fitness back home on the hills in Virginia and then ship to Kentucky.”

Bobby and Token are well prepared for their CCI4* debut, and Bobby is confident that they can put in a good showing. “It’s going to be a new experience for both of us, and I know it’s going to be tough. But I know that we are both capable of putting in a good performance.”