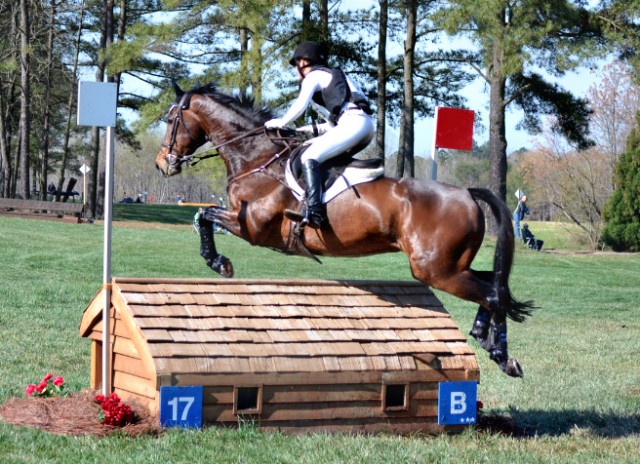 Confidence is Ellie MacPhail’s keyword as she makes her final preparations for her CCI4* debut with RF Eloquence, a 10-year-old Holsteiner gelding owned by Sally Crane. After stepping back to the two-star level with “Ricky Bobby” after he rehabbed from a minor injury, Ellie felt that his confidence had really boosted and that he was ready to tackle his first four-star.

Competed through the CIC* level with Germany’s Dirk Schrade, RF Eloquence was sourced by Karen O’Connor and Marilyn Little as a 6-year-old for another rider, and Ellie was who he ended up with in the end. “They called me and let me know he was available, as they thought he’d be well suited for me,” Ellie recalled.

The goal for the gelding was always for him to become an upper-level talent, so she has spent the time putting in the necessary work to achieve that goal.

“It’s been a little difficult finding the balance between keeping him confident and not overdoing it,” Ellie said. “We did a lot of cross country schools, but we didn’t overdo it. But it’s really been great for his confidence to school the questions and keep him working.”

Ellie has described the talented gelding before as one that prefers to have his hand held, but she’s begun feeling him become more confident as time progresses. “The good thing is, he is brave about corners and drops, so we don’t have to worry about those,” Ellie said. “It’s not that he’s afraid — he just needs to take the edge off a little.“

After finishing second in the CIC3* at Poplar Place last month, Elinor felt that both she and Ricky Bobby were ready for their next challenge. “I think we really knew he was ready after we moved back up to Advanced last year, before Fair Hill,” she said. “At Poplar, he really stepped up and I realized that he was really a serious horse. He’s always the type to be nervous on cross country, but then he steps up and handles it way better than you’d ever expect.”

Ellie works with Clayton Fredericks in Florida and was also named to the Eventing 25 list program year, where she was able to receive coaching from Leslie Law. “The main thing we got from Leslie was some changes to my hand position,” she said. “Bobby gets a little tense and curled, so Leslie worked with us on staying out of his way and letting them do their job.”

Ellie and RF Eloquence finished 11th in the CCI3* at Fair Hill last year, giving them a solid prep for Derek di Grazia’s beefed-up Rolex course. As is the opinion of most riders, Ellie is excited to get out and tackle Derek’s course.

“Fair Hill was great,” she said. “All of the questions were presented in a way that the horses understood them, but it was still tricky. I’m still pretty freaked out, but it’s been good to have the prep events leading up so I can just focus on one step at a time.“

For Ellie, Rolex is a goal that has been in the works since she volunteered as a Pony Club member when she was younger. “I went and volunteered, and that’s when I knew I wanted to event,” she said in her Eventing 25 interview. “My mom fox hunted, so I grew up around the horses, and I kind of always knew I’d find what I wanted to do with it.”