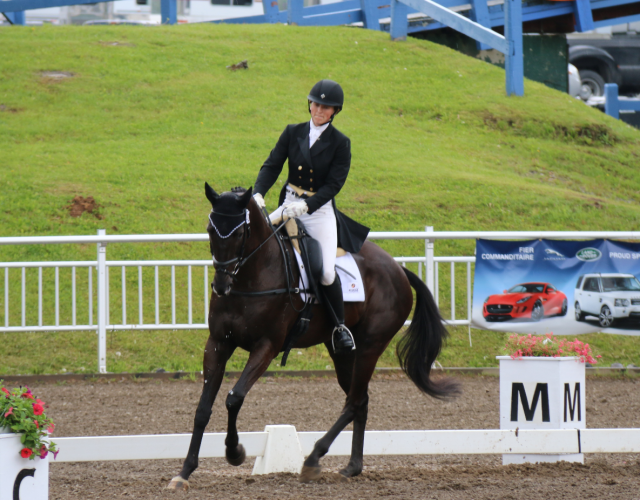 Elisa and Johnny at Bromont. Photo by Leslie Wylie.

Elisa Wallace wears many hats in the equestrian world, including her skill with training mustangs straight out of the wild and campaigning two horses at the upper levels. She’s about to add another to her collection as she prepares for her CCI4* debut in Kentucky this year with Jill Hopcroft’s Simply Priceless.

Elisa’s had the ride on “Johnny,” a 13-year-old Australian Thoroughbred, for coming on two years this year. “He’s actually a bit of a miracle horse, as when I started riding him he was coming off of a year off after an injury,” Elisa said. “Vets told the owners he would never compete again, but they were hopeful he would come back. So far, he’s been great.”

As with many horses at the top levels, Johnny is not without his quirks. It seems to be a common characteristic of horses who reach the upper levels, just as humans who are relative geniuses can sometimes be described as eccentric.

“He’s an interesting horse,” Elisa said. “It’s almost a bit of Jekyll and Hyde; he can come across as a very laid back Joe kind of guy, but he also gets upset and anxious easily. A big challenge has been to get him comfortable and secure, which is why the dressage has been a big obstacle to overcome.”

In preparation for the increased atmosphere at Rolex, Elisa has been working to expose Johnny to as many new situations as possible. “I try to take him to as many new places as possible, even if it’s just to school for a few minutes,” she said.

Elisa also has a stereo system in her arena through which she blares music with crowd applause. She also spends time trying to “get” him, or getting him to connect with and focus on her instead of outside stimulants.

“He loses his focus a lot, and I want him to depend on me for his relaxation,” she continued. “It’s helped that I’m not intimidated by him — he’s a big boy at 16.3. But I want to connect with him, because the minute they leave you they’re so concerned with everything else going on outside.”

“It’s funny because the more people there are, and the louder they are, the more focused he becomes on cross country. In the dressage if a tree blows the wrong way, it’s like Armageddon.” 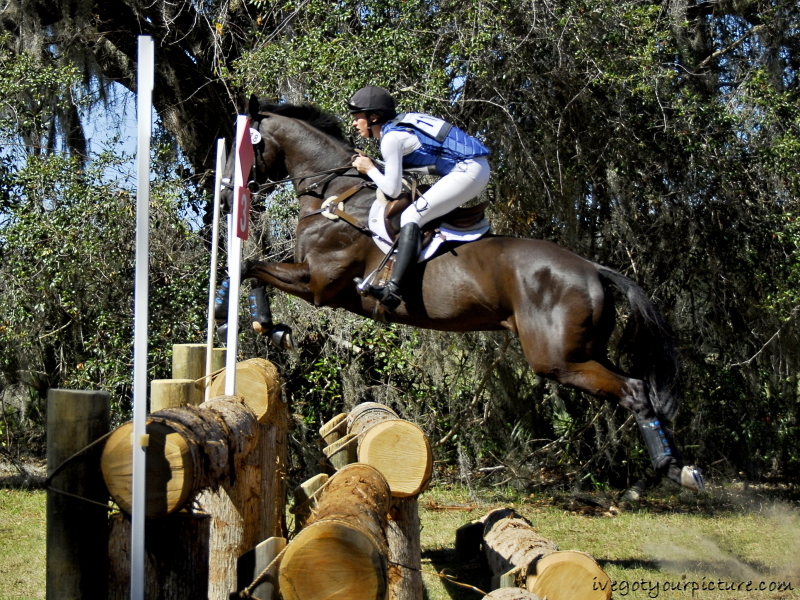 Elisa’s found it usually takes a couple of shows at the onset of the season to really get into a groove with Johnny, and she feels he is coming around to peak at just the right time this year. With their eighth place finish in the CIC3* at Red Hills, Elisa feels they’re headed in the right direction.

Derek di Grazia’s hefty course in Kentucky will suit Johnny’s style, Elisa believes. “I was able to walk the course last year, and I remember wishing I could ride it,” she said. “Johnny is very adjustable, and I can ride him in a snaffle. He would eat that course up. Cross country is our best phase — if it was all cross country, I think we’d be winning all the time!”

As Johnny’s final preparation, he’ll run an Advanced CT at Poplar Place and Ocala. “We’ve got the cross country down,” Elisa said. “I’ll just be working on his fitness and getting him in the dressage ring. I’m focusing on keeping him busy and getting him to peak at the perfect time.”

Looking ahead, Elisa knows her biggest challenge in Kentucky will come in the first phase. “I just hope he can holds his head together in the dressage,” she said. “I actually hope it rains on us there. Every time it’s rained on us, he does great. I don’t know what it is. Even if it’s rainy and windy, he focuses better. If it’s just windy, we all know that wind contains trolls that love to eat black Australian Thoroughbreds.”

As her childhood dream of competing at Rolex approaches, Elisa is thankful to have the opportunity to tackle her first one aboard Johnny. “He’s always going to be the type of horse who makes you a better rider,” she said. “I want to go to Rolex and of course finish, but I’d love to go to Rolex and compete. I don’t mind being the dark horse.“

“Johnny’s a big clown and a bit high maintenance sometimes, but I would feel so empty if I didn’t have him in my barn. I’m so appreciative of everything he’s taught me, and I do think he’s got what it takes to be a top level horse. I’d like to thank Jill and Dave Hopcroft for entrusting me with Johnny and being a great support for us.”