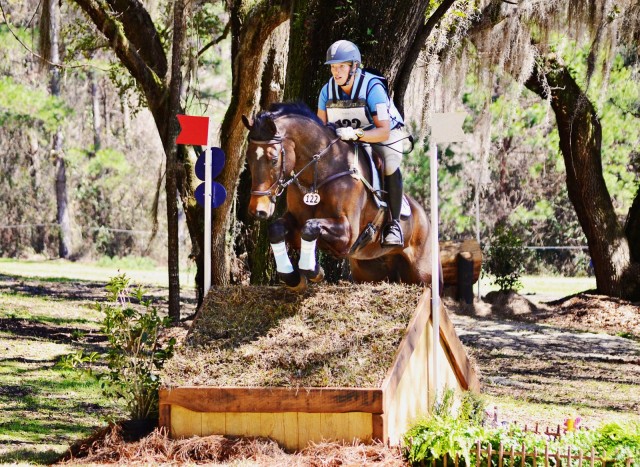 Ellen Doughty may have one of the best storylines for this weekend: not only is she competing in her first CCI4*, she is also marrying the love of her life (besides her horse!), Alistair, on the cross country course on Friday evening. How cool is that? Suffice it to say, this bride-to-be has plenty on her plate as she prepares for one of the most important weekends of her life — and she is taking it all in stride in true Ellen fashion.

As a rider, Ellen has a story that we all love to hear: an individual who has worked tirelessly to climb the ladder and reach the top of the sport. Ellen and her 10-year-old Holsteiner/Thoroughbred gelding Sir Oberon were named to the Winter/Spring 2014 USEF High Performance Training list and ventured to Florida from their home base in Texas to partake in lessons with David O’Connor. Having spent the majority of her time as an upper-level rider sans a trainer — instead focusing on building her teaching and training business in order to support herself and working hard to move up the levels with Obie — Ellen got a lot out of her experiences in Florida and said that David was able to help her fine tune her wonderful partnership with the horse.

This spring, Ellen has let Obie have a fairly light schedule, as the horse didn’t require a lot of runs to keep him fit and sharp. The pair picked up a blue ribbon in their first spring outing at Intermediate at Ocala and most recently finished third in a competitive CIC3* division at Red Hills. Obie was then slated to run at Texas Rose for his final Rolex prep, but a heel grab kept him sidelined. All healed up and no worse for the wear, Ellen has focused on keeping Obie fit and honing in on the dressage skills leading up to Kentucky. 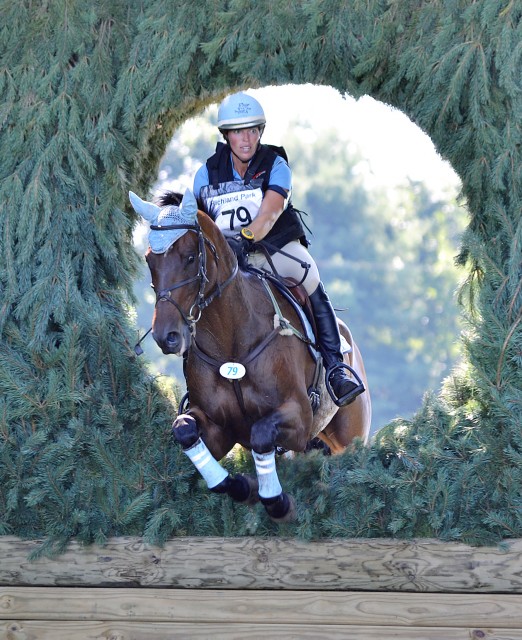 “He doesn’t need a lot of runs,” Ellen said. “He doesn’t really get tense in dressage, so I wasn’t too worried about missing Texas Rose. One thing I will be practicing is riding in my tails, as he does get a little worked up from them brushing his hindquarters. So I will be riding in those as much as possible before Rolex so that he can hopefully get a little more used to the feeling.” As far as the atmosphere at Rolex, Ellen isn’t too concerned. “I really don’t think he will have an issue with the atmosphere,” she said. “He’s pretty professional about everything, and I think if we just go into it just like any other event, he will be just fine.”

Ellen refers to Obie as the most talented horse she has ever had the privilege of riding. “As soon as I sat on him, I knew he was going to be special,” Ellen said. “He was just such a competitor. I’ve really tried to bring him along slowly and do things correctly. Sometimes you get to this level and you tend to second guess yourself and wonder if you really belong. But we were doing well and being competitive against pairs who have been competing at the four-star level, so now I know that we are fully capable of being here.”

As is the case with every competitor, Ellen’s ultimate goal this weekend is to finish on her dressage score. “I’d love to see us score at least in the 40s,” Ellen said. “I know he can do it; we’ve managed to shave a point or so off at every show. There are a lot of changes in this test, and he usually is really great with those, so I know that will help us. I’ve really been concentrating on our trot work; that’s one thing we really worked on with David, and it tends to be our weakest part of the dressage.”

Ellen and Alistair’s friends and family will be in Kentucky to cheer her on and watch the happy couple tie the knot. “I’m really excited about it,” Ellen said. “It just seems like a fitting way to get married, and with (Alistair) being originally from England and myself being from Michigan, it just didn’t make sense to try and have the wedding in Texas. I honestly brought up the idea jokingly, but my mom made a few calls and before I knew it we were planning a wedding at the Kentucky Horse Park.”

You can find out more about Ellen’s journey to Rolex on her Featured Rider blog on Rolex’s website. Best of luck to Ellen and Sir Oberon, who truly prove that hard work really does pay off.