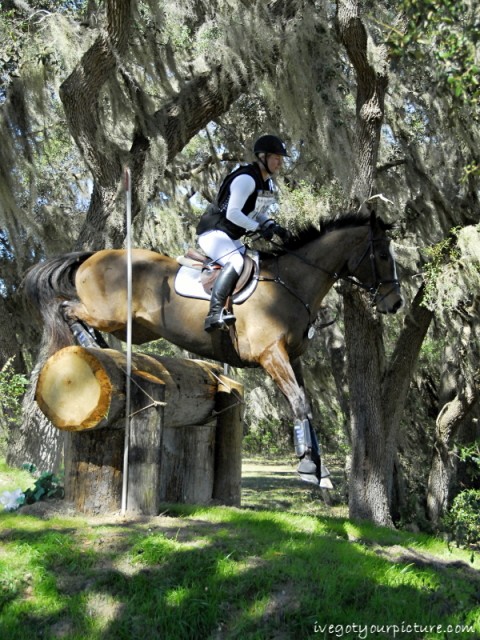 There was something about the bay gelding that struck Leah as special on a chance visit to a racetrack in Martinsville, Illinois. She was looking for her next event horse, either to be a resale project or a competition horse, and found a listing that caught her eye on CANTER Illinois. As soon as she laid eyes on the then-5-year-old AP Prime, Leah knew he was the one she wanted.

“He had such a self-awareness about him; he had presence,” Leah recalled. “It was pretty amazing — from a conformation standpoint, I probably wouldn’t pick him today because I would think he wouldn’t stay sound. But knock of everything wood, he has stayed sound and has just been special from the get go.”

Even on the trailer ride home, however, Leah wasn’t 100% sure of her decision. “I kept asking if I was doing the right thing,” she said. “I was so desperate to bring something along, at that point I was going off of a gut feeling.”

That gut feeling paid off for Leah and AP Prime (Aptitude – Czarina Kate, by The Prime Minister), who is now 10, as he took to his new career like a fish in water. “The first time I took him Beginner Novice, I had people asking if he was for sale as an Advanced prospect,” Leah said. “He’d only gone cross country schooling once at a neighbor’s property, but he just attacked everything and came off the course all proud of himself. At that point I thought, ‘Wow, this is a serious horse.'”

AP progressed through the levels, making the step up to Intermediate in the summer of 2012 at River Glen in Tennessee. A year later, Leah and AP finished the CCI2* at Fair Hill, and it was in that moment that Leah realized her dream of going to Rolex may come to fruition on the back of her game OTTB.

“The first time I thought we were going to go to Rolex was after cross country at Fair Hill,” Leah said. “He came into the vet box and was released 10 minutes before the two horses who had come in ahead of him. He’s just a freak of nature. After Fair Hill, his body work person said he felt as if he’d just gone on a trail ride. It’s just not difficult for him.” 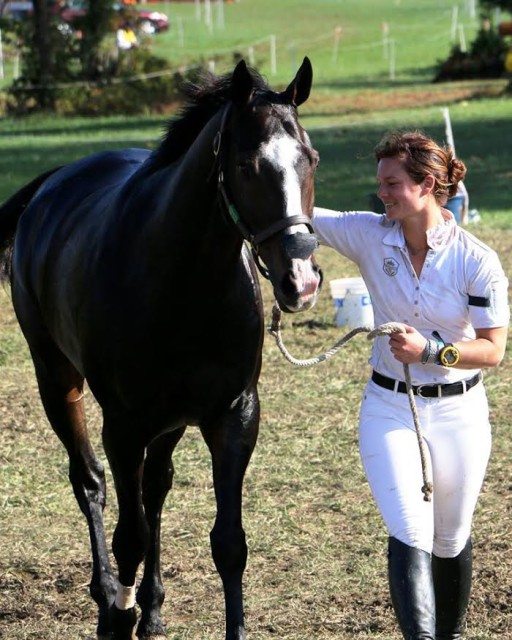 Now in 2015, Leah has made Rolex her official goal, and all lights are green as she handles her final preparations with Kentucky drawing closer. “Originally (last year) I wanted to to The Fork and Jersey Fresh, and then he lacerated his foot before The Fork,” Leah said. “It ended up being almost a blessing in disguise, though, as he got to run around two Derek (di Grazia) courses at Bromont and Fair Hill instead.”

“Now I’m confident that he’s seen almost everything there is to see at that level, and he’s seen at least a version of what Derek may use on the Rolex course. I’ve tried really hard to be patient and give him the time he needs to see everything and feel comfortable and confident.“

Leading up to Rolex, Leah and AP are entered in the CIC3* at The Fork, where she plans to at least do the dressage and stadium. “I talked to Jon (Holling) after Red Hills, and I told him that he really could not have run any better there,” she said. “I don’t know that I really want to run him again. Jon and I plan to walk the course at The Fork, and maybe if there is a question, like a big drop into the water, that he needs to see then I may do that and then pull up. It’s about balancing between being super prepared and pushing it.”

Overall, though, Leah is feeling ready and confident for her CCI4* debut. “I’ve been riding baby horses all winter, which helps make you really gritty and tough on cross country,” she said. “I’m feeling really fit, and I really feel that I’m in a good place.”

“I can’t thank my parents enough; they really have stepped up and have supported AP and I through every step. They’re making sure we have everything we need for Rolex, and I really am so grateful for their help.”

Knowing that the famed Rolex stadium has atmosphere in spades, Leah’s been working with AP to expose him to as many new environments as possible. “We’ve taken him to Longwood and dressage or jumper shows, just anything to get him away from home. At Red Hills, he was the best he’s ever been. The Fork will also be really important for the atmosphere element; that can be his undoing, but we’re getting to a really good place and I feel like he will be as prepared as possible.”

At the end of the day, Leah is thankful to have a horse who is making her dreams come true, and she can’t wait to get out and attack the cross country come April 25. “I cross my fingers constantly that we’ll make it there — that’s the first step! After that, I know we’ve done everything we can to prepare, and it’s all about learning and experiencing it from there.”