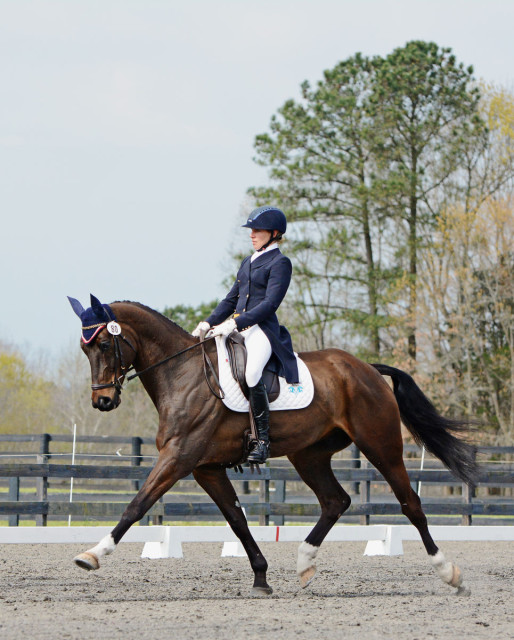 Liz Halliday-Sharp knew she wanted to ride at the Rolex Kentucky Three-Day Event from the moment she stepped foot on the cross country course at the inaugural CCI4* in 1998.

“That was what made me want to be a top rider. I walked the course with Jimmy Wofford, and it changed my life,” Liz said. “I came away from it and said, ‘This is what I want to do.’ I’ve never forgotten it.”

With her Rolex dream in mind and one Preliminary event under her belt, Liz left her native California and went to England in January 2000 for a working student stint with William Fox-Pitt that was meant to last just one year. She ultimately never left England.

Chasing that elusive first four-star, she completed all her CCI qualifiers in Europe, jumping double clear around her first CCI3* at Boekelo just three years later in 2003 on a horse named Bally Supreme, who she produced from the Intermediate level.

She could have taken that horse to her first four-star years ago, or Red Letter Day, another horse she jumped clear around Boekelo in 2008. But, as we know how these things sometimes go with upper-level event horses, soundness and physical ability can often play the role of spoiler. Neither Bally Supreme nor Red Letter Day would ever make it to the four-star level.

“Those were also the years that I was doing a lot of motorsports, too, so I only had two or three horses in my string,” Liz said. “It was difficult doing two sports at a high level.”

Liz is the most successful female sports car racing driver in the U.S., with six victories in the American Le Mans Series, but in 2013 she decided to focus solely on her eventing career with the goal of one day representing Team USA on the international stage. She purchased a farm in Ocala to try to split her time between England and the U.S., where she’s been based this winter preparing for Rolex.

So that’s how it happened that Liz is only now doing her first four-star 12 years after jumping double clear around her first CCI3* at Boekelo. And, of course, finding horses that could make it to the four-star level has been a big part of the equation, too.

Richard Sheane of Cooley Sport Horses, who Liz partners with in Cooley Horses International, found her Rolex mount Fernhill By Night as a 9-year-old two-star horse about two and a half years ago, and she bought him as a four-star hopeful based on Richard’s recommendation.

“He knew the horse had issues on his record, but he told me, ‘This horse is world class, I’m sure of it. You’re going to have to work at it, and you might have problems along the way.’ I’ve always agreed with Richard that the horse is good enough to do anything we put in front of him. He’s talented, and he gets better all the time.”

Together, Liz and the now 12-year-old Irish Sport Horse gelding owned by Deborah Halliday jumped clear around three-star courses like Boekelo, Ballindenisk, Camphire and Hartpury last year, and while their preparation so far this season hasn’t always been without blips on cross country, Liz remains confident this horse can jump around Kentucky.

“I have to remind himself that this horse jumped some really big, tough tracks in Europe last year,” Liz said. “I’m remembering what he did for me last year, and I’m going to keep that in my heart and remember what he’s capable of and that I just have to keep fighting.”

“Blackie” is set to do his last gallop today and then Liz and her super groom Gemma Jelinska will roll out from her Horsepower Equestrian in Ocala at about 2 a.m. Monday morning to make the long drive up to the Kentucky Horse Park.

While hauling out for Rolex is always going to be stressful, Liz’s situation is made even more hectic by the fact that three of the horses she currently has in Ocala are shipping home to England after the event.

“We’re taking four horses to Rolex, including our working student’s horse, plus all their gear, and three of them will be staying in the non-competing barns. The horse park has been extremely helpful and agreed to allow the traveling horses to stay until April 29, which is the day they fly out of Alabama. That way they can fly straight to Stansted instead of flying to Amsterdam.”

HHS Cooley is one of the horses who will be staying in the non-competing barns at the Kentucky Horse Park in preparation to fly home, a bittersweet ending to his time in the States, as he was meant to be Liz’s second ride in her Rolex debut.

The 11-year-old Irish Sport Horse gelding owned by Deborah Halliday finished second at Red Hills CIC3* in March only to sustain a minor injury at The Fork CIC3* earlier this month in his final prep run for Rolex; Liz withdrew him from the event last week.

“It was a big blow to have that happen to Cooley, but I’m relieved it’s not worse than it is,” Liz said. The injury also takes Cooley out of contention for the U.S. Pan American Games team, but the horse should heal up just fine and be back out for a fall three-day.

‘The cherry on top’

“With all that’s happened, both good and bad, I’m to the point where I just want to get to Rolex. I’m like that with every three-day,” Liz said. “It’s not a done deal until you’re there and through the trot up, and then you can start focusing on it.”

Liz came to Rolex in 2014 for the first time in 15 years to both see the track and do some commentary work for the USEF Network’s live stream, so she has a good idea of what to expect when she arrives on the hallowed grounds of the Kentucky Horse Park next week.

“I thought the questions were fair and that the horses could understand them, and I think that’s what good course design is at this level,” Liz said. “It should be difficult, but it should be jumpable. I think the course will suit Blackie. He needs a gallopy, punchy track where I can attack the fences. That suits his brain.”

Liz is excited to have her support team there to watch her compete in her first CCI4*, and her husband, Al; mom, Deborah, who also owns Blackie; and aunt, who rode when she was younger, will all be making the trip to Kentucky.

Her dressage trainer, James Burtwell, is also flying over from England to help her on the flat and to have “a holiday in the sun” — though recent forecasts for Lexington might stymie that for him! — and Liz also has two dear friends who are over from England on business and are road tripping from Minneapolis to watch her go.

“I’m excited to do my first four-star in my home country after being away for such a long time. It really is a dream for me to go to Rolex; I’m emotional about it. It will be great to have everyone there to support me,” Liz said.

“Thank you to my sponsors, supporters and family for getting me to this point. It makes a huge difference to have the support around me through these crazy six months of being in the U.S., and Rolex will really be the cherry on top.”