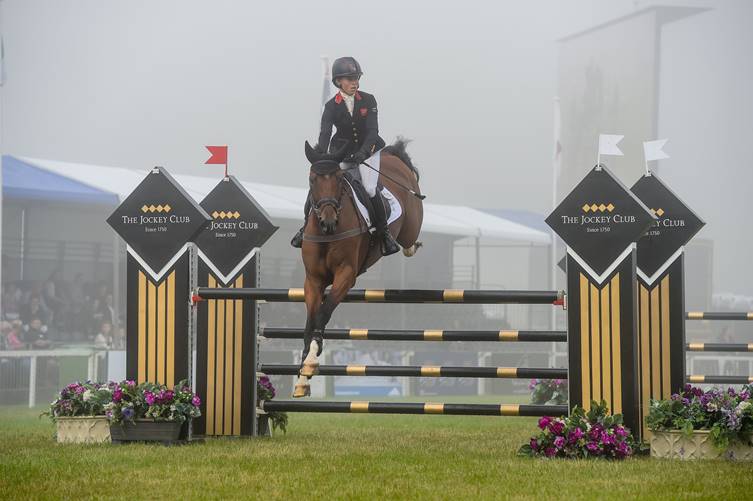 Ros Canter will go into the final cross-country phase in the lead in the CCI4*-S for eight- and nine-year-old horses at Blenheim Palace International Horse Trials after showjumping clear on Izilot DHI.

Ros (pictured below), the current world champion, was in first after dressage in this prestigious young horse class with a mark of 26.6 on her own and Alex Moody’s eight-year-old, and just added 1.6 time-faults round the demanding showjumping track.

“I couldn’t be more delighted with him – he’s never even done an advanced class before, let alone a four-star, and then I was away in Tokyo [where she was Britain’s reserve rider], so even coming here was a big ask,” said Ros. “I was confident he would have the scope to do it and he’s very brave, but he’s a spooky horse, and this was a clever track.

“I’m very open-minded about tomorrow’s cross-country – if he sets out and he’s green, I’ll slow down. Of course it would be great to win, but I am more excited about him winning an Olympic medal in the future, so I am realistic about what we will do tomorrow.”

Izilot DHI may be making his debut at CCI4* level, but he won the CCI3*-Ls at both Houghton Hall and Blair Castle this season.

There were only seven clears within the time in this morning’s showjumping – for which the spectacular main arena was shrouded in fog – from the 49 starters. Tom Jackson, second on Jonathan and Lexi Hambro and May-Britt Wedd’s HH Moonwalk, left all the poles up but collected two time-faults. He will therefore set out across country on a score of 29.6.

Tom said: “It’s obviously frustrating to get time-faults, but he’s an amazingly talented horse and I couldn’t really have asked more of him. He went a little bit tight in his body in the slightly eerie atmosphere, but he still jumped clear and he’s one for which we have big hopes for the future.”

Nicola Wilson has risen four places to third on Jo and James Lambert’s Coolparks Sarco after posting a clear round inside the time, remaining on her dressage mark of 29.8.

Caroline Harris is in fourth on Becky Stones’ Miss Pepperpot after adding just 0.4 of a time-fault to her dressage score of 30.4.

“She’s amazing!” said Caroline. “She’s only been eventing for two years, really, so she’s come a long way. This was a proper jumper’s track – not really in terms of height, but the distances really kept you thinking.

“She’s quite feisty and she likes to go – she’s been double clear [at CCI4*-S level] at Burgham and Hartpury, but anything can happen tomorrow.”

Willa Newton also jumped clear inside the time on Cock A Doodle Doo to take fifth place, while Piggy March is in sixth on Cooley Lancer.

The CCI4*-S cross-country starts at 11.30am tomorrow (Sunday, 19 September) and can be watched via Horse & Country TV’s streaming platform, H&C+.