Amber Birtcil of California and Cinzano, owned by Cellar Farm, lead the Advanced after dressage on a score of 29.1. Young Rider Sophie Click and Quidproquo are second on 31.4 and Alina Patterson and Flashback are third on 32.1. The five Advanced competitors will take on Morgan Rowsell’s cross-country course starting at 10:50 a.m. on Saturday, September 18.

In the Open Intermediate, Jordan Linstedt and Staccato, a Hanoverian gelding owned by Janine Jaro, secured a convincing lead with a score of 21.8–nearly 10 points ahead of Marc Grandia and Campari FFF, owned by Team Rebecca, LLC, and Rachel Brickman-Raudales and Finally DG, owned by Leigh Robinson, who are tied for second on 31.1.

“The dressage specifically has gotten stronger and better this year,” said Linstedt of Staccato. “He’s starting to feel like I can bring him up in the ring. He’s much more underneath himself, so I can get better movement than I have in the past. But he’s always been a very good dressage horse.”

Of the cross-country course designed by Morgan Rowsell, Linstedt said “The course looks really good. There’s a new course designer here this year. He uses the land and the terrain and places the fences tricky–15 feet in a different direction might be flat ground, but he’ll place the fence where there’s a little terrain and the fence rides a bit bigger because of that. I’m excited about the course. There’s tricky stuff throughout.”

“He’s green at this level,” said Linstedt of Staccato’s cross-country performance prospects. “In the past, he has either went out and won, or we’ve had an issue at the water. He runs big and strong; I need to slow him down and bring him back together more for the water complexes, so we’ll see what happens tomorrow. I want him to be an Advanced horse, so this weekend I’m not thinking about going out and trying to win if I need to take my time. He’s a phenomenal horse; he has everything you want in a top-level event horse.”

Aspen Farms is thrilled to once again host the USEA Area VII Championships. This year Championships consists of 10 divisions from Beginner Novice to Intermediate and over 150 horse and rider combinations who qualified in 2020/21.

Stephanie Cooper and Drs Resolute, owned by Get Lucky LLC, lead the Area VII Open Intermediate Championship on a dressage score of 30.2. “I thought he was great today,” said Cooper. “In the spring he was naughty here in the dressage. I was excited that he kept it together today and showed where he is at in his training.”

Looking ahead to tomorrow’s cross-country, Cooper said, “I think the cross-country looks great. I’m notoriously quite slow. The questions out there are made more difficult if you want to go fast and cut some corners; I’ll try to do that!”

In the Area VII Open Preliminary Championship division, Karen O’Neal and Clooney 14, owned by Annika Asling, are first of fifteen competitors on a score of 20–the lowest score of the day.

“I had to light a fire under him today,” said O’Neal of Clooney’s dressage performance. “He can be a little spooky and a little lazy at times, but quite a nice horse. I tried to ride him as forward as I could and keep him in front of the leg. He was great today and it was fun.”

Considering the cross-country course tomorrow, O’Neal said, “The course looks great. Very fair. He’s just turning 7 this year and is still green. He does spook. Keeping his mind in the game will be a challenge.” O’Neal is followed closely in the overnight placings by Jordan Lindstedt and Lovely Lola who scored 20.2.

“Lola was great today,” said Linstedt. “Doing the A test in the short court is challenging. She is a huge moving horse and very forward as well, so hard to contain. I felt like I was quite conservative. In that short court things come up so quickly; I could barely let her out and show her off too much. But she was very good–very rideable and through her back.”

“She was really lovely,” said Hoff, who has only been partnered with Explosion for several months. “It was a lot of improvement from our last couple of tests, so I was really happy with it. I think the cross-country course looks good. I’ve only done three events with her ever, so this will be the most technical course we’ve jumped so far. It looks fun.”
Dane Padgett and Cafe Noir scored 23 to sit in second, and Harper Padgett and Captivate scored 26.6 for third in the Area VII Junior Training Championship. 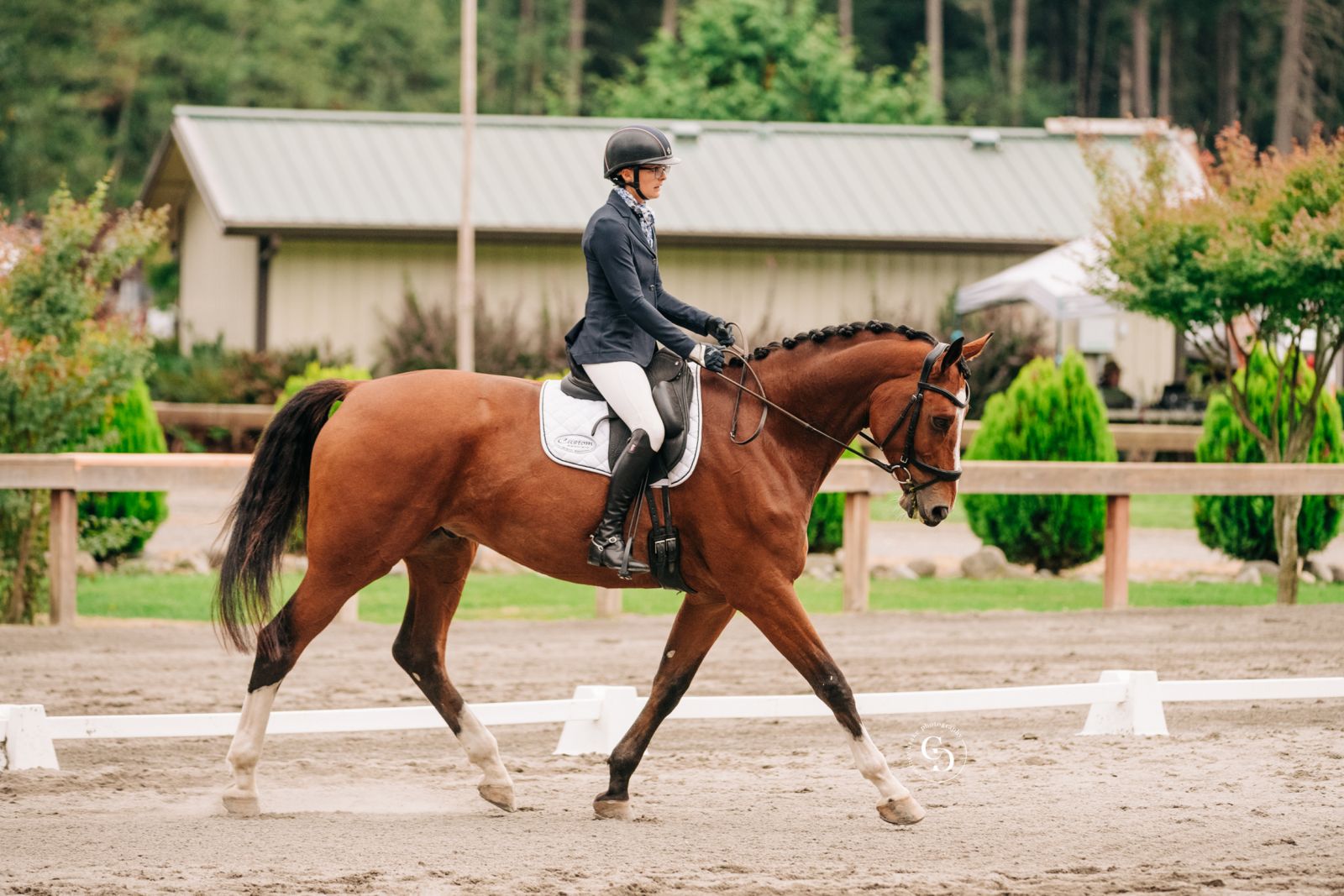 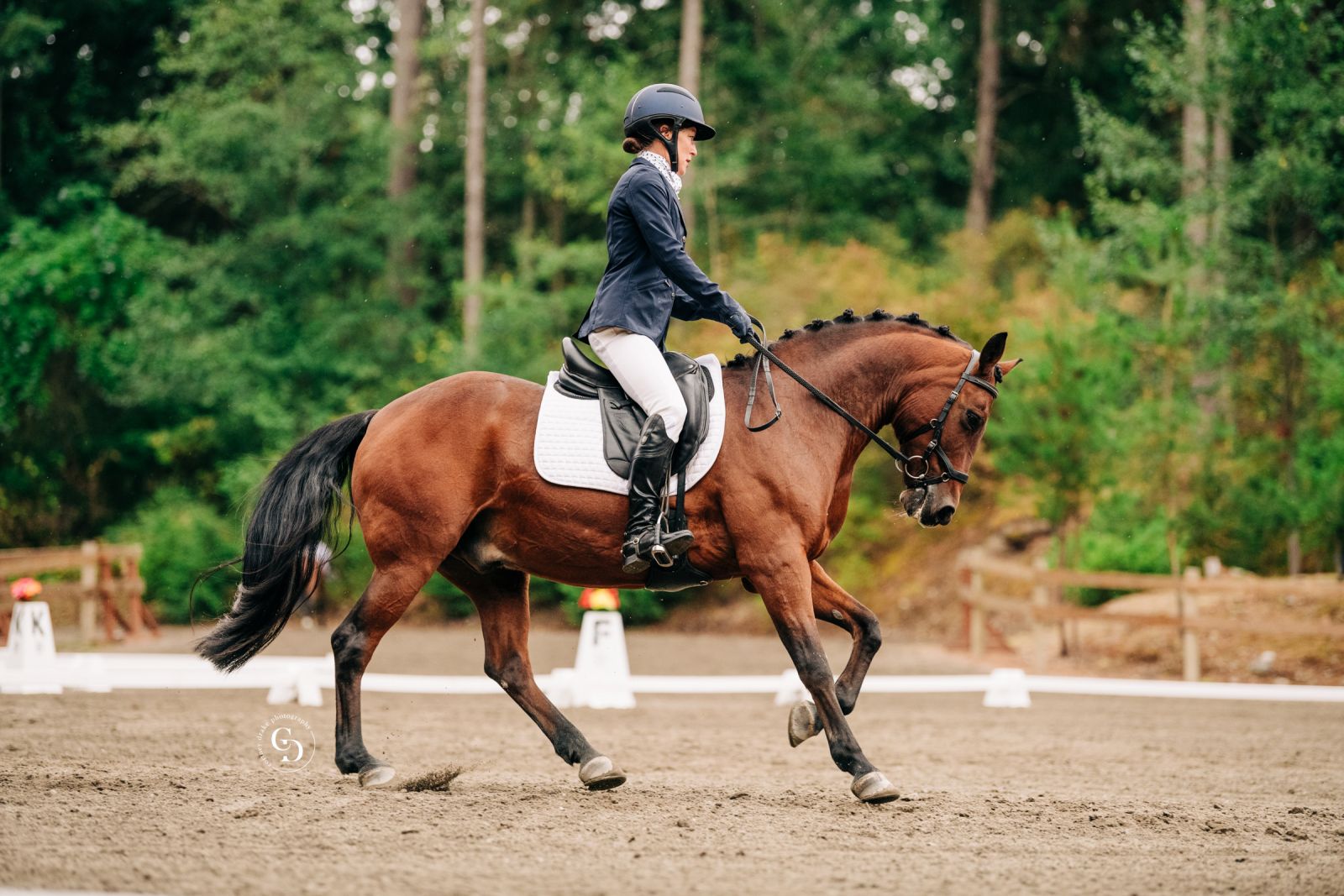 Caroline Hagens and Frequent Flyer Miles are the overnight leaders in the Area VII Junior Novice Championship in just their second show together. They qualified for the Championships at Rebecca Farms in July.

“He was very good today,” said Hagens. “He was nice and relaxed. Overall it felt like a really nice and smooth test. I’m excited to see how the course looks and how it will ride tomorrow.”

In the Area VII Beginner Novice Open Championships, Sarah Sullivan and Ready Or Knot Here’s Mouse!–her 5-year-old off-the-track-Thoroughbred that she bought as a wedding present to herself when he was 3-years-old–secured the top placing overnight with a score of 26.3. “I was very proud of him,” said Sullivan. “He’s kind of new to it. This is his first real show season due to COVID. He seems super game.” 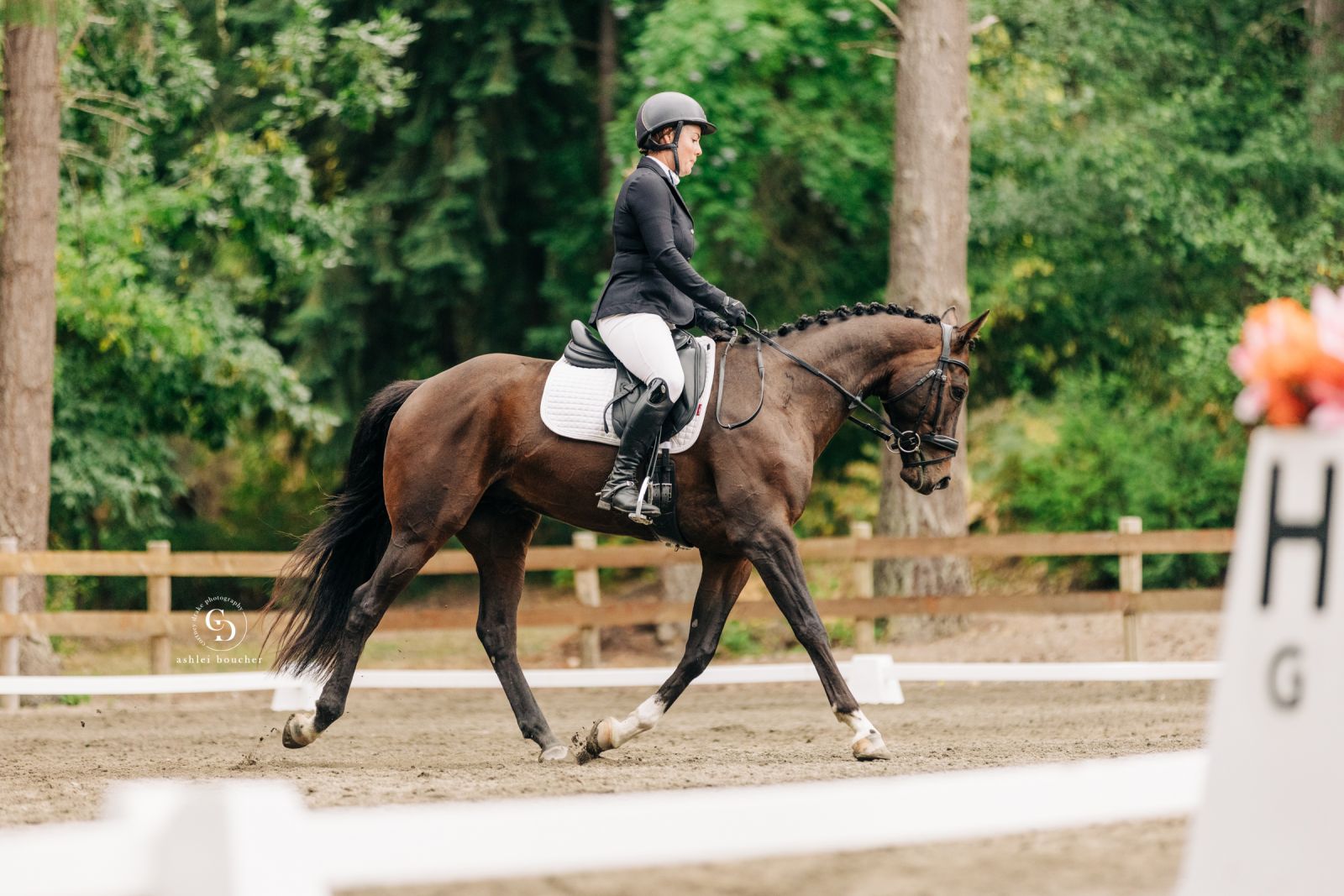 Complete scores are available on Startbox Scoring, here. You can find additional show coverage on Aspen Farms Horse Trials Facebook page, here and on Instagram @AspenFarmsHorseTrials. You can also follow EN’s Instagram story for a takeover happening all weekend from Jordan Linstedt’s team!